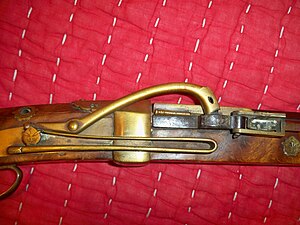 The serpentine (a curved lever with a clamp on the end) was held in firing position by a weak spring,[2] and released by pressing a button, pulling a trigger, or even pulling a short string passing into the mechanism. The slow match held in the serpentine swung into a flash pan containing priming powder. The flash from the flash pan travelled through the touch hole igniting the main propellant charge of the gun. As the match was often extinguished after its relatively violent collision with the flash pan, this type fell out of favour with soldiers, but was often used in fine target weapons.