For parts of a distribution system, fuses are capable of both sensing and disconnecting faults

Failures may occur in each part, such as insulation failure, fallen or broken transmission lines, incorrect operation of circuit breakers, short circuits and open circuits. Protection devices are installed with the aims of protection of assets and ensuring continued supply of energy.

Switchgear is a combination of electrical disconnect switches, fuses or circuit breakers used to control, protect and isolate electrical equipment. Switches are safe to open under normal load current (some switches are not safe to operate under normal or abnormal conditions), while protective devices are safe to open under fault current. Very important equipment may have completely redundant and independent protective systems, while a minor branch distribution line may have very simple low-cost protection. [1] 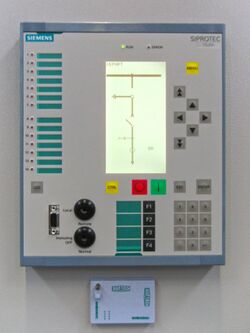 A digital (numeric) multifunction protective relay for distribution networks. A single such device can replace many single-function electromechanical relays, and provides self-testing and communication functions.

Protection on the transmission and distribution system serves two functions: protection of plant and protection of the public (including employees). At a basic level, protection disconnects equipment which experiences an overload or a short to earth. Some items in substations such as transformers might require additional protection based on temperature or gas pressure, among others.

In a power plant, the protective relays are intended to prevent damage to alternators or to the transformers in case of abnormal conditions of operation, due to internal failures, as well as insulating failures or regulation malfunctions. Such failures are unusual, so the protective relays have to operate very rarely. If a protective relay fails to detect a fault, the resulting damage to the alternator or to the transformer might require costly equipment repairs or replacement, as well as income loss from the inability to produce and sell energy.

Overload and back-up for distance (overcurrent)

Overload protection requires a current transformer which simply measures the current in a circuit. There are two types of overload protection: instantaneous overcurrent (IOC) and time overcurrent (TOC). Instantaneous overcurrent requires that the current exceeds a predetermined level for the circuit breaker to operate. Time overcurrent protection operates based on a current vs time curve. Based on this curve, if the measured current exceeds a given level for the preset amount of time, the circuit breaker or fuse will operate. The function of both types is explained in "Non-Directional Overcurrent Protection" on YouTube.

Distance protection detects both voltage and current. A fault on a circuit will generally create a sag in the voltage level. If the ratio of voltage to current measured at the relay terminals, which equates to an impedance, lands within a predetermined level the circuit breaker will operate. This is useful for reasonably long lines, lines longer than 10 miles, because their operating characteristics are based on the line characteristics. This means that when a fault appears on the line the impedance setting in the relay is compared to the apparent impedance of the line from the relay terminals to the fault. If the relay setting is determined to be below the apparent impedance it is determined that the fault is within the zone of protection. When the transmission line length is too short, less than 10 miles, distance protection becomes more difficult to coordinate. In these instances the best choice of protection is current differential protection.

The low-voltage network generally relies upon fuses or low-voltage circuit breakers to remove both overload and earth faults.

The bulk system which is a large interconnected electrical system including transmission and control system is experiencing new cybersecurity threats every day. (“Electric Grid Cybersecurity,” 2019). Most of these attacks are aiming the control systems in the grids. These control systems are connected to the internet and makes it easier for hackers to attack them. These attacks can cause damage to equipment and limit the utility professionals ability to control the system.

Protective device coordination is the process of determining the "best fit" timing of current interruption when abnormal electrical conditions occur. The goal is to minimize an outage to the greatest extent possible. Historically, protective device coordination was done on translucent log–log paper. Modern methods normally include detailed computer based analysis and reporting.

Protection coordination is also handled through dividing the power system into protective zones. If a fault were to occur in a given zone, necessary actions will be executed to isolate that zone from the entire system. Zone definitions account for generators, buses, transformers, transmission and distribution lines, and motors. Additionally, zones possess the following features: zones overlap, overlap regions denote circuit breakers, and all circuit breakers in a given zone with a fault will open in order to isolate the fault. Overlapped regions are created by two sets of instrument transformers and relays for each circuit breaker. They are designed for redundancy to eliminate unprotected areas; however, overlapped regions are devised to remain as small as possible such that when a fault occurs in an overlap region and the two zones which encompass the fault are isolated, the sector of the power system which is lost from service is still small despite two zones being isolated.[3]