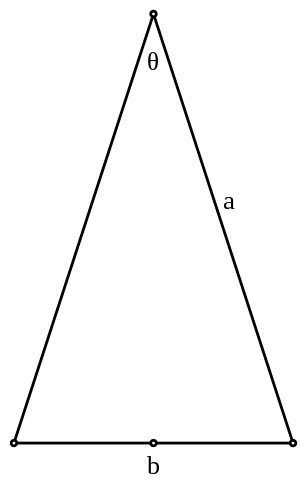 A golden triangle, also called a sublime triangle,[1] is an isosceles triangle in which the duplicated side is in the golden ratio [math]\displaystyle{ \varphi }[/math] to the base side:

Hence the golden triangle is an acute (isosceles) triangle.

In other geometric figures

The golden triangle is used to form some points of a logarithmic spiral. By bisecting one of the base angles, a new point is created that in turn, makes another golden triangle.[4] The bisection process can be continued infinitely, creating an infinite number of golden triangles. A logarithmic spiral can be drawn through the vertices. This spiral is also known as an equiangular spiral, a term coined by René Descartes. "If a straight line is drawn from the pole to any point on the curve, it cuts the curve at precisely the same angle," hence equiangular.[5]

Regular pentagram. Each corner is a golden triangle. The figure also contains five "big" golden gnomons, made by joining to the "small" central pentagon two corners that are not adjacent to each other. Drawing the five sides of the "big" pentagon around the pentagram makes five "small" golden gnomons.