A pneumonectomy (or pneumectomy) is a surgical procedure to remove a lung. Removal of just one lobe of the lung is specifically referred to as a lobectomy, and that of a segment of the lung as a wedge resection (or segmentectomy).

The most common reason for a pneumonectomy is to remove tumourous tissue arising from lung cancer. In the days prior to the use of antibiotics in tuberculosis treatment, tuberculosis was sometimes treated surgically by pneumonectomy.

The operation will reduce the respiratory capacity of the patient; before conducting a pneumonectomy, the surgeon will evaluate the ability of the patient to function after the lung tissue is removed. After the operation, patients are often given an incentive spirometer to help exercise their remaining lung and to improve breathing function. A rib or two is sometimes removed to allow the surgeon better access to the lung. 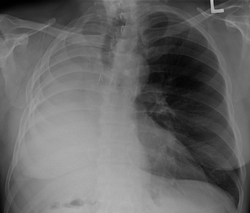 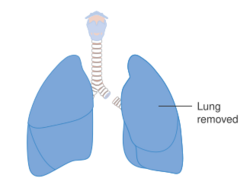 Diagram showing the parts removed in a pneumonectomy

There are two types of pneumonectomy: