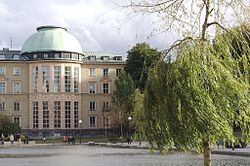 The main building of the school, designed by Ivar Tengbom and built 1925–1926, is located at Sveavägen in central Stockholm. 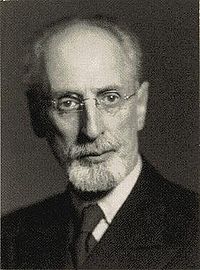 The Stockholm School of Economics (SSE; Swedish: Handelshögskolan i Stockholm, HHS) is one of Europe's leading business schools. SSE offers BSc, MSc and MBA programs, along with highly regarded PhD- and Executive Education programs. SSE's Master program in Finance is ranked no.18 worldwide as of 2018. The Masters in Management program is ranked no. 12 worldwide by the Financial Times .[1] QS ranks SSE no.26 among universities in the field of economics worldwide.[2] The school is the only privately funded university in Sweden.

SSE is accredited by EQUIS and is a member of CEMS.

The Stockholm School of Economics was founded in 1909 on private initiative as a response to rapid industrialization and a growing need for well educated businessmen and company managers and has maintained close ties with the business community ever since. The foundation followed a substantial donation in 1903 by Knut Agathon Wallenberg. The name handelshögskola (roughly "college of commerce") was a parallel to the German term Handelshochschule, used by a number of German institutions started in the years before, commencing with Handelshochschule Leipzig in 1898. The term högskola was at this time also established for specialised higher educational institutions outside the universities, such as the Royal Institute of Technology, (Kungl.) Tekniska högskolan, which bore that name from 1877.

While founded as a business school, the subject of economics featured prominently in the research and curriculum of the school from the beginning.

Ohlin was also a leading figure within the school of doctrine with the same name, the so-called Stockholm school; a group of leading Scandinavian economists influenced by Knut Wicksell, most of them active in Stockholm, either at the Stockholm School of Economics or the Stockholm University College. This school of doctrine was to have a profound influence on post-WWII Swedish economic policy and the development of the modern Scandinavian Welfare state. Heckscher and Ohlin jointly developed the so-called Heckscher-Ohlin theory, the standard international mathematical model of international trade. Bertil Ohlin received the Nobel Prize in Economics in 1977 (shared with British economist James Meade). Other prominent members of the Stockholm school were the Stockholm University professor Gustav Cassel, who developed standard economic theory of Purchasing power parity and economist Dag Hammarskjöld, Secretary-General of the United Nations in New York City , United States.

The school is a full member of the Association of Professional Schools of International Affairs (APSIA), a group of schools of public policy, public administration, and international studies.

For Master programmes, applicants have to have a GMAT score of over 600 and a TOEFL iBT score of over 100 in order to be considered suitable for applying.[3] In the academic year 2012/2013 the university received 3261 applications for the four Masters programmes which it offered at the time.[4] Therefore, the according acceptance rate would have been low.

The MSc programs are all conducted in English.

SSE Master of Science in Business and Management

The MSc in International Business is a two-year program targeting students who see the world as their home and is fully integrated with CEMS MIM. The current CEMS Club Board is represented by Martina Mariani, Sebastian Schaaf and Julia Gerwien.[6] The MSc Program in International Business takes part in the FT Masters in Management ranking. The latest ranking placed the program 12th out of 100 participating top international business schools.[7]

SSE Master of Science in Economics

The in Economics is a program designed for students with a background in economics or business. As well as the other master programs it is a two-year program with 120 ECTS. There are offered two specializations: Applied Economic Analysis and International Economics.[8]

SSE Master of Science in Accounting, Valuation, and Financial Management

The SSE EMBA program was launched in 2001. Since 2001, the year the Financial Times began its Executive MBA ranking, the SSE Executive MBA has been the first in the Nordic league. Worldwide its average rank in the last three years was 56.[10][11]

The SSE PhD Program was launched more than 60 years ago and has graduated more than 500 PhDs.[12] There are three separate PhD programs at SSE:

Stockholm School of Economics (SSE) alumni are defined as previous students that have graduated from one of SSE's degree programs. Today, there are some 14 000 alumni in this network. In addition to the alumni are the so-called SSE IFL Networkers, previous participants at IFL open or custom programs, these sum up to an additional 10 000.

SSE maintains contacts with its alumni in a number of different ways; both through direct and indirect contacts and through various types of communication channels. Contacts are administered through the SSE Alumni Office.

Today, many alumni are involved in the school's advisory board, the alumni association's board, the Student Association et al., all aligned to SSE activities. Even more alumni return to the School as guest lectures, or sponsors of course projects, as suppliers of internship opportunities, or as recruiters from large companies.

Currently, if an alumnus wishes to connect with another SSE graduate, they have five primary options: 1. Attending the alumni events arranged by SSE Alumni Office 2. Networking through the SSE Alumninet, a web portal open to holders of an SSE diploma. Alumninet had some 14 000 members as of January 2013, or through the official LinkedIn groups maintained by SSE 3. Membership in the Alumni Association of the Stockholm School of Economics – an alumni association sponsored and organized by alumni for Swedish-speaking graduates of SSE – or by joining the American Friends of SSE – an affiliated alumni group, based in the US. 4. Joining any of the unofficial alumni groups and networks, maintained by the alumni themselves, e.g. in the UK.