Molecular diffusion from a microscopic and macroscopic point of view. Initially, there are solute molecules on the left side of a barrier (purple line) and none on the right. The barrier is removed, and the solute diffuses to fill the whole container. Top: A single molecule moves around randomly. Middle: With more molecules, there is a clear trend where the solute fills the container more and more uniformly. Bottom: With an enormous number of solute molecules, randomness becomes undetectable: The solute appears to move smoothly and systematically from high-concentration areas to low-concentration areas. This smooth flow is described by Fick's laws.

In 1855, physiologist Adolf Fick first reported[1] his now well-known laws governing the transport of mass through diffusive means. Fick's work was inspired by the earlier experiments of Thomas Graham, which fell short of proposing the fundamental laws for which Fick would become famous. Fick's law is analogous to the relationships discovered at the same epoch by other eminent scientists: Darcy's law (hydraulic flow), Ohm's law (charge transport), and Fourier's Law (heat transport).

Fick's experiments (modeled on Graham's) dealt with measuring the concentrations and fluxes of salt, diffusing between two reservoirs through tubes of water. It is notable that Fick's work primarily concerned diffusion in fluids, because at the time, diffusion in solids was not considered generally possible.[2] Today, Fick's Laws form the core of our understanding of diffusion in solids, liquids, and gases (in the absence of bulk fluid motion in the latter two cases). When a diffusion process does not follow Fick's laws (which happens in cases of diffusion through porous media and diffusion of swelling penetrants, among others),[3][4] it is referred to as non-Fickian.

D is proportional to the squared velocity of the diffusing particles, which depends on the temperature, viscosity of the fluid and the size of the particles according to the Stokes–Einstein relation. In dilute aqueous solutions the diffusion coefficients of most ions are similar and have values that at room temperature are in the range of (0.6–2)×10−9 m2/s. For biological molecules the diffusion coefficients normally range from 10−10 to 10−11 m2/s.

In two or more dimensions we must use ∇, the del or gradient operator, which generalises the first derivative, obtaining

The driving force for the one-dimensional diffusion is the quantity −∂φ/∂x, which for ideal mixtures is the concentration gradient.

Alternative formulations of the first law

Another form for the first law is to write it with the primary variable as mass fraction (yi, given for example in kg/kg), then the equation changes to:

Note that the [math]\displaystyle{ \rho }[/math] is outside the gradient operator. This is because:

where ρsi is the partial density of the ith species.

Beyond this, in chemical systems other than ideal solutions or mixtures, the driving force for diffusion of each species is the gradient of chemical potential of this species. Then Fick's first law (one-dimensional case) can be written

The driving force of Fick's law can be expressed as a fugacity difference:

Four versions of Fick's law for binary gas mixtures are given below. These assume: thermal diffusion is negligible; the body force per unit mass is the same on both species; and either pressure is constant or both species have the same molar mass. Under these conditions, Ref. [7] shows in detail how the diffusion equation from the kinetic theory of gases reduces to this version of Fick's law:

where Vi is the diffusion velocity of species i. In terms of species flux this is

If, additionally, [math]\displaystyle{ \nabla \rho = 0 }[/math], this reduces to the most common form of Fick's law,

If (instead of or in addition to [math]\displaystyle{ \nabla \rho = 0 }[/math]) both species have the same molar mass, Fick's law becomes

where [math]\displaystyle{ x_i }[/math] is the mole fraction of species i.

Fick's second law predicts how diffusion causes the concentration to change with respect to time. It is a partial differential equation which in one dimension reads:

In two or more dimensions we must use the Laplacian Δ = ∇2, which generalises the second derivative, obtaining the equation

Fick's second law can be derived from Fick's first law and the mass conservation in absence of any chemical reactions:

Assuming the diffusion coefficient D to be a constant, one can exchange the orders of the differentiation and multiply by the constant:

and, thus, receive the form of the Fick's equations as was stated above.

which is analogous to the heat equation.

If the diffusion coefficient is not a constant, but depends upon the coordinate or concentration, Fick's second law yields

An important example is the case where φ is at a steady state, i.e. the concentration does not change by time, so that the left part of the above equation is identically zero. In one dimension with constant D, the solution for the concentration will be a linear change of concentrations along x. In two or more dimensions we obtain

which is Laplace's equation, the solutions to which are referred to by mathematicians as harmonic functions.

Fick's second law is a special case of the convection–diffusion equation in which there is no advective flux and no net volumetric source. It can be derived from the continuity equation:

where j is the total flux and R is a net volumetric source for φ. The only source of flux in this situation is assumed to be diffusive flux:

Plugging the definition of diffusive flux to the continuity equation and assuming there is no source (R = 0), we arrive at Fick's second law:

If flux were the result of both diffusive flux and advective flux, the convection–diffusion equation is the result.

A simple case of diffusion with time t in one dimension (taken as the x-axis) from a boundary located at position x = 0, where the concentration is maintained at a value n0 is

where erfc is the complementary error function. This is the case when corrosive gases diffuse through the oxidative layer towards the metal surface (if we assume that concentration of gases in the environment is constant and the diffusion space – that is, the corrosion product layer – is semi-infinite, starting at 0 at the surface and spreading infinitely deep in the material). If, in its turn, the diffusion space is infinite (lasting both through the layer with n(x, 0) = 0, x > 0 and that with n(x, 0) = n0, x ≤ 0), then the solution is amended only with coefficient 1/2 in front of n0 (as the diffusion now occurs in both directions). This case is valid when some solution with concentration n0 is put in contact with a layer of pure solvent. (Bokstein, 2005) The length 2√Dt is called the diffusion length and provides a measure of how far the concentration has propagated in the x-direction by diffusion in time t (Bird, 1976).

As a quick approximation of the error function, the first two terms of the Taylor series can be used:

If D is time-dependent, the diffusion length becomes

This idea is useful for estimating a diffusion length over a heating and cooling cycle, where D varies with temperature.

Another simple case of diffusion is the Brownian motion of one particle. The particle's Mean squared displacement from its original position is:

The square root of MSD, [math]\displaystyle{ \sqrt{2nDt} }[/math], is often used as a characterization of how far has the particle moved after time [math]\displaystyle{ t }[/math] has elapsed. The MSD is symmetrically distributed over the 1D, 2D, and 3D space. Thus, the probability distribution of the magnitude of MSD in 1D is Gaussian and 3D is Maxwell-Boltzmann distribution.

The Chapman–Enskog formulae for diffusion in gases include exactly the same terms. These physical models of diffusion are different from the test models ∂tφi = Σj Dij Δφj which are valid for very small deviations from the uniform equilibrium. Earlier, such terms were introduced in the Maxwell–Stefan diffusion equation.

For anisotropic multicomponent diffusion coefficients one needs a rank-four tensor, for example Dij,αβ, where i, j refer to the components and α, β = 1, 2, 3 correspond to the space coordinates.

Equations based on Fick's law have been commonly used to model transport processes in foods, neurons, biopolymers, pharmaceuticals, porous soils, population dynamics, nuclear materials, plasma physics, and semiconductor doping processes. The theory of voltammetric methods is based on solutions of Fick's equation. On the other hand, in some cases a "Fickian" description is inadequate. For example, in polymer science and food science a more general approach is required to describe transport of components in materials undergoing a glass transition. One more general framework is the Maxwell–Stefan diffusion equations[8] of multi-component mass transfer, from which Fick's law can be obtained as a limiting case, when the mixture is extremely dilute and every chemical species is interacting only with the bulk mixture and not with other species. To account for the presence of multiple species in a non-dilute mixture, several variations of the Maxwell–Stefan equations are used. See also non-diagonal coupled transport processes (Onsager relationship). 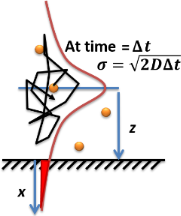 Scheme of molecular diffusion in the solution. Orange dots are solute molecules, solvent molecules are not drawn, black arrow is an example random walk trajectory, and the red curve is the diffusive Gaussian broadening probability function from the Fick's law of diffusion.[10]:Fig. 9

The adsorption or absorption rate of a dilute solute to a surface or interface in a (gas or liquid) solution can be calculated using Fick's laws of diffusion. The accumulated number of molecules adsorbed on the surface is expressed by the Langmuir-Schaefer equation at the short-time limit by integrating the diffusion equation over time:[11]

The Langmuir-Schaefer equation can be extended to the Ward-Tordai Equation to account for the "back-diffusion" of rejected molecules from the surface:[12]

For a single molecule such as organic molecules or biomolecules (e.g. proteins) in water, the exponential term is negligible due to the small product of mμ in the picosecond region.

The above hitting rate equation is also useful to predict the kinetics of molecular self-assembly on a surface. Molecules are randomly oriented in the bulk solution. Assuming 1/6 of the molecules has the right orientation to the surface binding sites, i.e. 1/2 of the z-direction in x, y, z three dimensions, thus the concentration of interest is just 1/6 of the bulk concentration. Put this value into the equation one should be able to calculate the theoretical adsorption kinetic curve using the Langmuir adsorption model. In a more rigid picture, 1/6 can be replaced by the steric factor of the binding geometry.

The first law gives rise to the following formula:[15]

Fick's first law is also important in radiation transfer equations. However, in this context, it becomes inaccurate when the diffusion constant is low and the radiation becomes limited by the speed of light rather than by the resistance of the material the radiation is flowing through. In this situation, one can use a flux limiter.

The exchange rate of a gas across a fluid membrane can be determined by using this law together with Graham's law.

Under the condition of a diluted solution when diffusion takes control, the membrane permeability mentioned in the above section can be theoretically calculated for the solute using the equation mentioned in the last section (use with particular care because the equation is derived for dense solutes, while biological molecules are not denser than water):[10]

The flux is decay over the square root of time because a concentration gradient builds up near the membrane over time under ideal conditions. When there is flow and convection, the flux can be significantly different than the equation predicts and show an effective time t with a fixed value,[13] which makes the flux stable instead of decay over time. This strategy is adopted in biology such as blood circulation.