On average, skydiving participants felt that their own experience had taken 36% longer, which allows a person to remember what they experience in greater detail during intense situations.[1]

Tachypsychia is a neurological condition that alters the perception of time, usually induced by physical exertion, drug use, or a traumatic event. For someone affected by tachypsychia, time perceived by the individual either lengthens, making events appear to slow down, or contracts, objects appearing as moving in a speeding blur.[2] It is believed that tachypsychia is induced by a combination of high levels of dopamine and norepinephrine, usually during periods of great physical stress or in violent confrontation.[1] Interestingly, a controlled experiment from 2007 suggests the subjective experience of time slowing down is actually an artifact of memory, not an actual trait of real-time perception.[3] However, newer research seems to contradict this, with results showing that during high stress events a focus on action preparation[4] actually does increase information processing, slowing down time perception. A 2012 review of most current research (including the 2007 study) seems to support this as well[5]. Due to the contradictory research results and difficulty of accurately replicating the natural conditions in which the phenomenon occurs, there is still no set consensus on how tachypsychia functions.

Also called the "fight or flight" response of the body to an event our mind considers life-threatening, tachypsychia is believed to include numerous physical changes.

Upon being stimulated by fear or anger, the adrenal medulla may automatically produce the hormone adrenaline directly into the blood stream. This can have various effects on various bodily systems, including:

The most common experience during tachypsychia is the feeling that time has either increased or slowed down, brought on by the increased brain activity caused by epinephrine, or the severe decrease in brain activity caused by the "catecholamine washout" occurring after the event. The perception of the duration of an event seems to be modulated by our recent experiences. Humans typically overestimate the perceived duration of the initial event in a stream of identical events[8] and unexpected "oddball" stimuli seem to be perceived as longer in duration, relative to expected or frequently presented "standard" stimuli.[9]

The oddball effect may serve an evolutionarily adapted "alerting" function and is consistent with reports of time slowing down in threatening situations. The effect seems to be strongest for images that are expanding in size on the retina, in other words, that are "looming" or approaching the viewer,[9][10][11] and the effect can be eradicated for oddballs that are contracting or perceived to be receding from the viewer.[10] The effect is also reduced[9] or reversed[11] with a static oddball presented amongst a stream of expanding stimuli.

Initial studies suggested that this oddball-induced “subjective time dilation” expanded the perceived duration of oddball stimuli by 30–50%[9] but subsequent research has reported more modest expansion of around 10%[11][12][13][14] or less.[15] The direction of the effect, whether the viewer perceives an increase or a decrease in duration, also seems to be dependent upon the stimulus used.[15]

It is common for an individual experiencing tachypsychia to have serious misinterpretations of their surroundings during the events, through a combination of their altered perception of time, as well as transient partial color blindness and tunnel vision. After the irregularly high levels of adrenaline consumed during sympathetic nervous system activation, an individual may display signs and symptoms of post-traumatic stress disorder, and it is common for the person to display extreme emotional liability and fatigue, regardless of their actual physical exertion.

During violent and threatening situations, people often report that things seem to take longer to happen, such as objects falling more slowly.[1]

Possibly related to the oddball effect, research suggests that time seems to slow down for a person during intense events—such as a car accident, a robbery, a chase, skydiving or bungee jumping, a potential predator threat or an intimacy with sexual partner (which would elicit sexual excitement, which in turn release adrenaline),[16] where they're capable of complex thoughts in what would normally be the blink of an eye caused by Fight-or-flight response. This reported slowing in temporal perception may have been evolutionary advantageous because it may have enhanced one's ability to intelligibly make quick decisions in moments that were of critical importance to our survival.[17] However, even though observers commonly report that time seems to have moved in slow motion during these events, it is unclear whether this is a function of increased time resolution during the event, or instead an illusion created by the remembering of an emotionally salient event.[18]

An Israeli research team have observed a strong time dilation effect in objects that were looming, but not the retreating, from the subjects. They theorize that the expanding discs—which mimic an approaching object—elicit self-referential processes which act to signal the presence of a possible danger. Anxious people, or those in great fear, experience greater "time dilation" in response to the same threat stimuli brought on by the increased brain activity caused by epinephrine, or an adrenaline rush.[19] In such circumstances, an illusion of time dilation could assist an efficacious escape.[20][21] When exposed to a threat, three-year-old children were observed to exhibit a similar tendency to overestimate elapsed time.[22][7]

Some research suggests that the effect appears only at the point of retrospective assessment, rather than occurring simultaneously with events as they happened.[1] Perceptual abilities were tested during a frightening experience - a free fall - by measuring people's sensitivity to flickering stimuli. The results showed that the subjects' temporal resolution was not improved as the frightening event was occurring. Events appear to have taken longer only in retrospect, possibly because memories were being more densely packed during the frightening situation.

However, newer research from 2012 suggests that effective motor preparation (the paper giving the example of professional athletes) can indeed lead to slowed time perception, involving not memory but enhanced sensory processing.[23] In addition, a review of most current research on the topic by the University of Turku also supports the above results[24].

People shown extracts from films known to induce fear often overestimated the elapsed time of a subsequently presented visual stimulus, whereas people shown clips known to evoke feelings of sadness or emotionally-neutral clips from weather forecasts and stock market updates showed no difference. It is argued that fear prompts a state of arousal in the amygdala, which increases the rate of a hypothesised "internal clock." This could be the result of an evolved defensive mechanism triggered by a threatening situation.[25]

Research has suggested the feeling of awe has the ability to expand one's perceptions of time availability. Awe can be characterized as an experience of immense perceptual vastness that coincides with an increase in focus. Consequently, it is conceivable that one's temporal perception would slow down when experiencing awe.[26] The perception of another persons' emotions can also change our sense of time. The theory of embodied mind (or cognition), as caused by mirror neurons, helps explain how the perception of other people's emotions has the ability to change one's own sense of time. Embodied cognition hinges on an internal process that mimics or simulates another's emotional state. For example, if person #1 spends time with person #2 who speaks and walks incredibly slowly, person #1's internal clock may slow down.

Depression may increase one's ability to perceive time accurately. One study assessed this concept by asking subjects to estimate the amount of time that passed during intervals ranging from 3 seconds to 65 seconds.[27] Results indicated that depressed subjects more accurately estimated the amount of time that had passed than non-depressed patients; non-depressed subjects overestimated the passing of time. This difference was hypothesized to be because depressed subjects focused less on external factors that may skew their judgement of time. The authors termed this hypothesized phenomenon "depressive realism."[27] 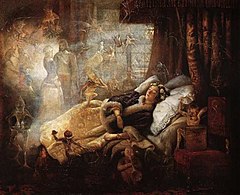 A person can experience a long dream which may have seemed to go on for hours, yet, in reality, it actually lasted only a few seconds or maybe minutes.[28]

The perception of time is temporarily suspended during sleep, or more often during REM sleep. This can be attributed to the altered state of consciousness associated with sleep where the person is kept unaware of their surroundings, which would make it difficult to remain informed of the passing of time. When the person awakes in the morning, they have the memory of going to bed the night before, but new memories are rarely made during sleep.

Therefore, upon waking up the following morning it feels as if no time has passed, but the human mind reasons that many hours have elapsed simply because it is now light outside. The passing of time is a relative event brought about by observation of objects (the sun’s location, the moon, a clock's time). Without a reference point there would be no context other than day or night. So, as far as time passing faster when during sleep may be due to the lack of reference points that convince the sleeper the time has passed quickly.[29]

Psychoactive drugs can alter the judgement of time. These include traditional psychedelics such as LSD, psilocybin, and mescaline as well as the dissociative class of psychedelics such as PCP, ketamine and dextromethorphan. At higher doses time may appear to slow down, speed up or seem out of sequence. In 1955, British MP Christopher Mayhew took mescaline hydrochloride in an experiment under the guidance of his friend, Dr Humphry Osmond. On the BBC documentary The Beyond Within, he described that half a dozen times during the experiment, he had "a period of time that didn't end for [him]".

The effect of cannabis on time perception has been studied with inconclusive results.