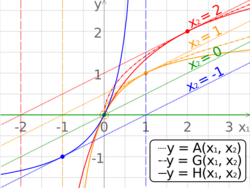 Comparison of the arithmetic, geometric and harmonic means of a pair of numbers. The vertical dashed lines are asymptotes for the harmonic means.

In mathematics, the three classical Pythagorean means are the arithmetic mean (AM), the geometric mean (GM), and the harmonic mean (HM). These means were studied with proportions by Pythagoreans and later generations of Greek mathematicians[1] because of their importance in geometry and music.

They are defined by:

Each mean, [math]\displaystyle{ \operatorname{M} }[/math], has the following properties:

Monotonicity and idempotence together imply that a mean of a set always lies between the extremes of the set.

The harmonic and arithmetic means are reciprocal duals of each other for positive arguments:

while the geometric mean is its own reciprocal dual:

with equality holding if and only if the [math]\displaystyle{ x_i }[/math] are all equal.

The study of the Pythagorean means is closely related to the study of majorization and Schur-convex functions. The harmonic and geometric means are concave symmetric functions of their arguments, and hence Schur-concave, while the arithmetic mean is a linear function of its arguments, so both concave and convex.

Almost everything that we know about the Pythagorean means came from Arithmetic handbooks written in the first and second century. Nicomachus of Gerasa says that they were “acknowledged by all the ancients, Pythagoras, Plato and Aristotle.” Their earliest known use is a fragment of the Pythagorean philosopher Archytas of Tarentum:

There are three means in music: one is arithmetic, second is the geometric, third is sub-contrary, which they call harmonic. The mean is arithmetic when three terms are in proportion such that the excess by which the first exceeds the second is that by which the second exceeds the third. In this proportion it turns out that the interval of the greater terms is less, but that of the lesser terms greater. The mean is the geometric when they are such that as the first is to the second, so the second is to the third. Of these terms the greater and the lesser have the interval between them equal. Subcontrary, which we call harmonic, is the mean when they are such that, by whatever part of itself the first term exceeds the second, by that part of the third the middle term exceeds the third. It turns out that in this proportion the interval between the greater terms is greater and that between the lesser terms is less. [2]

The name "harmonic mean", according to Iamblichus, was coined by Archytas and Hippasus. The Pythagorean means also appear in Plato's Timaeus. Another evidence of their early use is a commentary by Pappus.

It was [ . . . ] Theaetetus who distinguished the powers which are commensurable in length from those which are incommensurable, and who divided the more generally known irrational lines according to the different means, assigning the medial lines to geometry, the binomial to arithmetic, and the apotome to harmony, as is stated by Eudemus, the Peripatetic.[3]