Short description: Algorithm that employs a degree of randomness as part of its logic or procedure

A randomized algorithm is an algorithm that employs a degree of randomness as part of its logic or procedure. The algorithm typically uses uniformly random bits as an auxiliary input to guide its behavior, in the hope of achieving good performance in the "average case" over all possible choices of random determined by the random bits; thus either the running time, or the output (or both) are random variables.

One has to distinguish between algorithms that use the random input so that they always terminate with the correct answer, but where the expected running time is finite (Las Vegas algorithms, for example Quicksort[1]), and algorithms which have a chance of producing an incorrect result (Monte Carlo algorithms, for example the Monte Carlo algorithm for the MFAS problem[2]) or fail to produce a result either by signaling a failure or failing to terminate. In some cases, probabilistic algorithms are the only practical means of solving a problem.[3]

In common practice, randomized algorithms are approximated using a pseudorandom number generator in place of a true source of random bits; such an implementation may deviate from the expected theoretical behavior and mathematical guarantees which may depend on the existence of an ideal true random number generator.

As a motivating example, consider the problem of finding an ‘a’ in an array of n elements.

Input: An array of n≥2 elements, in which half are ‘a’s and the other half are ‘b’s.

We give two versions of the algorithm, one Las Vegas algorithm and one Monte Carlo algorithm.

Since it is constant, the expected run time over many calls is [math]\displaystyle{ \Theta(1) }[/math]. (See Big Theta notation)

This algorithm does not guarantee success, but the run time is bounded. The number of iterations is always less than or equal to k. Taking k to be constant the run time (expected and absolute) is [math]\displaystyle{ \Theta(1) }[/math].

Randomized algorithms are particularly useful when faced with a malicious "adversary" or attacker who deliberately tries to feed a bad input to the algorithm (see worst-case complexity and competitive analysis (online algorithm)) such as in the Prisoner's dilemma. It is for this reason that randomness is ubiquitous in cryptography. In cryptographic applications, pseudo-random numbers cannot be used, since the adversary can predict them, making the algorithm effectively deterministic. Therefore, either a source of truly random numbers or a cryptographically secure pseudo-random number generator is required. Another area in which randomness is inherent is quantum computing.

Computational complexity theory models randomized algorithms as probabilistic Turing machines. Both Las Vegas and Monte Carlo algorithms are considered, and several complexity classes are studied. The most basic randomized complexity class is RP, which is the class of decision problems for which there is an efficient (polynomial time) randomized algorithm (or probabilistic Turing machine) which recognizes NO-instances with absolute certainty and recognizes YES-instances with a probability of at least 1/2. The complement class for RP is co-RP. Problem classes having (possibly nonterminating) algorithms with polynomial time average case running time whose output is always correct are said to be in ZPP.

The class of problems for which both YES and NO-instances are allowed to be identified with some error is called BPP. This class acts as the randomized equivalent of P, i.e. BPP represents the class of efficient randomized algorithms.

The Miller–Rabin primality test relies on a binary relation between two positive integers k and n that can be expressed by saying that k "is a witness to the compositeness of" n. It can be shown that

Observe that this implies that the primality problem is in Co-RP.

If one randomly chooses 100 numbers less than a composite number n, then the probability of failing to find such a "witness" is (1/4)100 so that for most practical purposes, this is a good primality test. If n is big, there may be no other test that is practical. The probability of error can be reduced to an arbitrary degree by performing enough independent tests.

Therefore, in practice, there is no penalty associated with accepting a small probability of error, since with a little care the probability of error can be made astronomically small. Indeed, even though a deterministic polynomial-time primality test has since been found (see AKS primality test), it has not replaced the older probabilistic tests in cryptographic software nor is it expected to do so for the foreseeable future.

Quicksort is a familiar, commonly used algorithm in which randomness can be useful. Many deterministic versions of this algorithm require O(n2) time to sort n numbers for some well-defined class of degenerate inputs (such as an already sorted array), with the specific class of inputs that generate this behavior defined by the protocol for pivot selection. However, if the algorithm selects pivot elements uniformly at random, it has a provably high probability of finishing in O(n log n) time regardless of the characteristics of the input.

In computational geometry, a standard technique to build a structure like a convex hull or Delaunay triangulation is to randomly permute the input points and then insert them one by one into the existing structure. The randomization ensures that the expected number of changes to the structure caused by an insertion is small, and so the expected running time of the algorithm can be bounded from above. This technique is known as randomized incremental construction.[5]

Output: A cut partitioning the vertices into L and R, with the minimum number of edges between L and R.

Recall that the contraction of two nodes, u and v, in a (multi-)graph yields a new node u ' with edges that are the union of the edges incident on either u or v, except from any edge(s) connecting u and v. Figure 1 gives an example of contraction of vertex A and B. After contraction, the resulting graph may have parallel edges, but contains no self loops.

Figure 2: Successful run of Karger's algorithm on a 10-vertex graph. The minimum cut has size 3 and is indicated by the vertex colours. 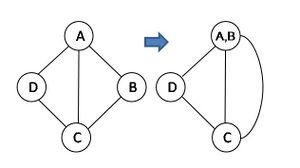 Figure 1: Contraction of vertex A and B

In each execution of the outer loop, the algorithm repeats the inner loop until only 2 nodes remain, the corresponding cut is obtained. The run time of one execution is [math]\displaystyle{ O(n) }[/math], and n denotes the number of vertices. After m times executions of the outer loop, we output the minimum cut among all the results. The figure 2 gives an example of one execution of the algorithm. After execution, we get a cut of size 3.

If G is not connected, then G can be partitioned into L and R without any edge between them. So the min cut in a disconnected graph is 0. Now, assume G is connected. Let V=L∪R be the partition of V induced by C : C = { {u,v} ∈ E : u ∈ L,v ∈ R } (well-defined since G is connected). Consider an edge {u,v} of C. Initially, u,v are distinct vertices. As long as we pick an edge [math]\displaystyle{ f \neq e }[/math], u and v do not get merged. Thus, at the end of the algorithm, we have two compound nodes covering the entire graph, one consisting of the vertices of L and the other consisting of the vertices of R. As in figure 2, the size of min cut is 1, and C = {(A,B)}. If we don't select (A,B) for contraction, we can get the min cut.

Lemma 2 — If G is a multigraph with p vertices and whose min cut has size k, then G has at least pk/2 edges.

Because the min cut is k, every vertex v must satisfy degree(v) ≥ k. Therefore, the sum of the degree is at least pk. But it is well known that the sum of vertex degrees equals 2|E|. The lemma follows.

By lemma 1, the probability that Ci = C is the probability that no edge of C is selected during iteration i. Consider the inner loop and let Gj denote the graph after j edge contractions, where j ∈ {0, 1, …, n − 3}. Gj has n − j vertices. We use the chain rule of conditional possibilities. The probability that the edge chosen at iteration j is not in C, given that no edge of C has been chosen before, is [math]\displaystyle{ 1-\frac{k}{|E(G_j)|} }[/math]. Note that Gj still has min cut of size k, so by Lemma 2, it still has at least [math]\displaystyle{ \frac{(n-j)k}{2} }[/math] edges.

Randomness can be viewed as a resource, like space and time. Derandomization is then the process of removing randomness (or using as little of it as possible). It is not currently known if all algorithms can be derandomized without significantly increasing their running time. For instance, in computational complexity, it is unknown whether P = BPP, i.e., we do not know whether we can take an arbitrary randomized algorithm that runs in polynomial time with a small error probability and derandomize it to run in polynomial time without using randomness.

There are specific methods that can be employed to derandomize particular randomized algorithms:

When the model of computation is restricted to Turing machines, it is currently an open question whether the ability to make random choices allows some problems to be solved in polynomial time that cannot be solved in polynomial time without this ability; this is the question of whether P = BPP. However, in other contexts, there are specific examples of problems where randomization yields strict improvements.