Twisted pair cabling is a type of wiring in which two conductors of a single circuit are twisted together for the purposes of improving electromagnetic compatibility. Compared to a single conductor or an untwisted balanced pair, a twisted pair reduces electromagnetic radiation from the pair and crosstalk between neighboring pairs and improves rejection of external electromagnetic interference. It was invented by Alexander Graham Bell.[1]

A twisted pair can be used as a balanced line, which as part of a balanced circuit can greatly reduce the effect of noise currents induced on the line by coupling of electric or magnetic fields. The idea is that the currents induced in each of the two wires are very nearly equal. The twisting ensures that the two wires are on average the same distance from the interfering source and are affected equally. The noise thus produces a common-mode signal which can be cancelled at the receiver by detecting the difference signal only, the latter being the wanted signal.

Common-mode rejection starts to fail on untwisted wires when the noise source is close to the signal wires; the closer wire will couple with the noise more strongly and the receiver will be unable to eliminate it. This problem is especially apparent in telecommunication cables where pairs in the same cable lie next to each other for many miles. Twisting the pairs counters this effect as on each half twist the wire nearest to the noise-source is exchanged. Provided the interfering source remains uniform, or nearly so, over the distance of a single twist, the induced noise will remain common-mode.

The twist rate (also called pitch of the twist, usually defined in twists per metre) makes up part of the specification for a given type of cable. When nearby pairs have equal twist rates, the same conductors of the different pairs may repeatedly lie next to each other, partially undoing the benefits of twisting. For this reason it is commonly specified that, at least for cables containing small numbers of pairs, the twist rates must differ.[2]

In contrast to shielded or foiled twisted pair (typically S/FTP or F/UTP cable shielding), UTP (unshielded twisted pair) cable is not surrounded by any shielding. UTP is the primary wire type for telephone usage and is very common for computer networking.

Wire transposition on top of pole

The earliest telephones used telegraph lines which were single-wire earth return circuits. In the 1880s electric trams were installed in many cities, which induced noise into these circuits. Lawsuits being unavailing, the telephone companies converted to balanced circuits, which had the incidental benefit of reducing attenuation, hence increasing range.

As electrical power distribution became more commonplace, this measure proved inadequate. Two wires, strung on either side of cross bars on utility poles, shared the route with electrical power lines. Within a few years, the growing use of electricity again brought an increase of interference, so engineers devised a method called wire transposition, to cancel out the interference.

In wire transposition, the wires exchange position once every several poles. In this way, the two wires would receive similar EMI from power lines. This represented an early implementation of twisting, with a twist rate of about four twists per kilometre, or six per mile. Such open-wire balanced lines with periodic transpositions still survive today in some rural areas.

Twisted-pair cabling was invented by Alexander Graham Bell in 1881.[3] By 1900, the entire American telephone network was either twisted pair or open wire with transposition to guard against interference. Today, most of the millions of kilometres of twisted pairs in the world are outdoor landlines, owned and maintained by telephone companies, used for voice service. 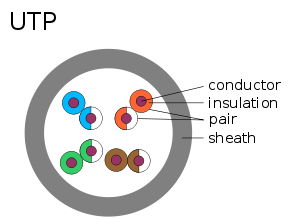 Unshielded twisted pair (UTP) cables are found in many Ethernet networks and telephone systems. For indoor telephone applications, UTP is often grouped into sets of 25 pairs according to a standard 25-pair color code originally developed by AT&T Corporation. A typical subset of these colors (white/blue, blue/white, white/orange, orange/white) shows up in most UTP cables. The cables are typically made with copper wires measured at 22 or 24 American Wire Gauge (AWG),[4] with the colored insulation typically made from an insulator such as polyethylene or FEP and the total package covered in a polyethylene jacket.

For urban outdoor telephone cables containing hundreds or thousands of pairs, the cable is divided into small but identical bundles. Each bundle consists of twisted pairs that have different twist rates as pairs having the same twist rate within the cable can still experience some degree of crosstalk. The bundles are in turn twisted together to make up the cable. 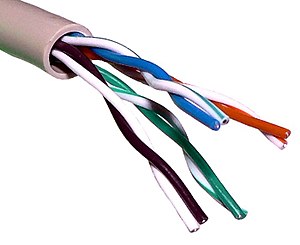 UTP is also the most common cable used in computer networking. Modern Ethernet, the most common data networking standard, can use UTP cables. Twisted-pair cabling is often used in data networks for short and medium-length connections because of its relatively lower costs compared to optical fiber and coaxial cable.

As UTP cable bandwidth has improved to match the baseband of television signals, UTP is now used in some video applications, primarily in security cameras.[5] As UTP is a balanced transmission line, a balun is needed to connect to unbalanced equipment, for example any using BNC connectors and designed for coaxial cable.

U/FTP, F/UTP and F/FTP are used in Cat 6a cables

Twisted pair cables often incorporate shielding in an attempt to prevent electromagnetic interference. Shielding provides an electrically conductive barrier to attenuate electromagnetic waves external to the shield; and provides a conduction path by which induced currents can be circulated and returned to the source via ground reference connection.

Such shielding can be applied to individual pairs or quads; or to a collection of pairs. Individual pairs are foil shielded, while an overall cable (of multiple pairs) may use any of braided screen or foil or braiding with foil.

When shielding is applied to a collection of pairs, it is usually referred to as screening, but usage among vendors and authors in applying such words as screening, shielding, and STP (shielded twisted pair) can be subject to variability.[6][7]

ISO/IEC 11801:2002 (Annex E) attempts to internationally standardize the various designations for shielded cables by using combinations of three letters - U for unshielded, S for braided shielding (in outer layer only), and F for foil shielding - to explicitly indicate the type of screen for overall cable protection and for protecting individual pairs or quads, using a two-part abbreviation in the form of x/xTP.

Because the shielding is made of metal, it may also serve as a path to ground; usually a screen shielded, twisted pair cable has an integrally incorporated, grounding wire, called a drain wire, which makes electrical contact with the shield or screen. The purpose of the drain wire is for easy connection of the screen to terminals, which are usually designed for connection of round wires.

An early example of shielded twisted-pair was IBM STP-A, which is a two-pair 150 ohm S/FTP cable defined in 1985 by the IBM Cabling System specifications, and used with token ring or FDDI networks.[6][9]

Before digital communication and ethernet became widespread there was no international standard for telephone cable. Standards were set at a national level. For instance, in the UK the General Post Office specified CW1293 and CW1308 cables. CW1308 was a similar specification to the earlier CW1293 but with an improved color code. CW1293 used mostly solid colors on the cores making it difficult to identify the pair it was twisted with without stripping back a large amount of sheath. CW1308 has narrow rings of the paired color printed over the base color to solve this problem. Both cables are a similar standard to category 3 cable.[10]

Prior to the common use of polyethylene and other plastics for insulation, telephone twisted pair cable was insulated with waxed paper or cotton with a wax coating applied to the copper. The overall sheath of this type of cable was usually lead. This style of cable came into use in the late 19th century shortly after the invention of the telephone.[11] The cable termination in termination boxes were sealed with molten wax or epoxy resin to prevent the ingress of moisture which would seriously degrade the insulating properties of the paper insulation.[12] However, such seals made future maintenance and changes more difficult. These cables are no longer made, but are still occasionally encountered in old buildings and in various external areas, commonly rural villages.

A loaded twisted pair has intentionally added inductance and was formerly common practice on telecommunication lines. The added inductors are known as load coils and reduce attenuation for voiceband frequencies but increase it on higher frequencies. Load coils reduce distortion in voiceband on very long lines.[17] In this context a line without load coils is referred to as an unloaded line.

A bonded twisted pair is a construction variant in which the two wires of each pair are bonded together for the length of the cable. Pioneered by Belden, it is intended to help assure configuration consistency during and after installation. One key benefit is that the noise immunity performance of the cable can be protected despite potentially rough handling.[18] This may not be necessary and it could have detrimental effects in applications which require flexible cable.[19]

A twisted ribbon cable is a variant of standard ribbon cable in which adjacent pairs of conductors are bonded and twisted together. The twisted pairs are then lightly bonded to each other in a ribbon format. Periodically along the ribbon there are short sections with no twisting to enable connectors and PCB headers to be terminated using the usual ribbon cable IDC techniques.[20]

Solid core cable is intended for permanently installed runs (permanent link). It is less flexible than stranded cable and is more prone to failure if repeatedly flexed due to work hardening. Stranded cable is used for fly leads at patch panel and for connections from wall-ports to end devices (patch cord or drop cable), as it resists cracking of the conductors.

Connectors are designed differently for solid core than for stranded. Use of a connector with the wrong cable type can lead to unreliable cabling. Plugs designed for solid and stranded core are readily available, and some vendors even offer plugs designed for use with both types. The punch-down blocks on patch-panel and wall-port jacks are designed for use with solid core cable. These work via the insulation-displacement method, whereby the device pierces the sides of the insulation and "bites" into the copper conductor to form a connection.