Short description: Euclidean space of dimension 2 that is axiomatically defined

In geometry, an affine plane is a system of points and lines that satisfy the following axioms:[1]

In an affine plane, two lines are called parallel if they are equal or disjoint. Using this definition, Playfair's axiom above can be replaced by:[2]

Parallelism is an equivalence relation on the lines of an affine plane.

Since no concepts other than those involving the relationship between points and lines are involved in the axioms, an affine plane is an object of study belonging to incidence geometry. They are non-degenerate linear spaces satisfying Playfair's axiom. 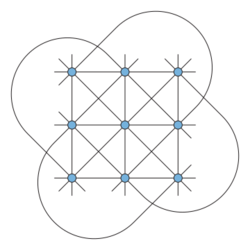 If the number of points in an affine plane is finite, then if one line of the plane contains n points then:

The number n is called the order of the affine plane.

The parallel class structure of an affine plane of order n may be used to construct a set of n − 1 mutually orthogonal latin squares. Only the incidence relations are needed for this construction.

An alternate view of affine translation planes can be obtained as follows: Let V be a 2n-dimensional vector space over a field F. A spread of V is a set S of n-dimensional subspaces of V that partition the non-zero vectors of V. The members of S are called the components of the spread and if Vi and Vj are distinct components then Vi ⊕ Vj = V. Let A be the incidence structure whose points are the vectors of V and whose lines are the cosets of components, that is, sets of the form v + U where v is a vector of V and U is a component of the spread S. Then:[6]

A is an affine plane and the group of translations x → x + w for a vector w is an automorphism group acting regularly on the points of this plane.

An incidence structure more general than a finite affine plane is a k-net of order n. This consists of n2 points and nk lines such that:

A k-net of order n is equivalent to a set of k − 2 mutually orthogonal Latin squares of order n.

For an arbitrary field F, let Σ be a set of n-dimensional subspaces of the vector space F2n, any two of which intersect only in {0} (called a partial spread). The members of Σ, and their cosets in F2n, form the lines of a translation net on the points of F2n. If |Σ| = k this is a k-net of order |Fn|. Starting with an affine translation plane, any subset of the parallel classes will form a translation net.

Given a translation net, it is not always possible to add parallel classes to the net to form an affine plane. However, if F is an infinite field, any partial spread Σ with fewer than |F| members can be extended and the translation net can be completed to an affine translation plane.[7]

where C⊥ is the orthogonal code to C.

When π = AG(2, q) the geometric code generated is the q-ary Reed-Muller Code.

Affine spaces can be defined in an analogous manner to the construction of affine planes from projective planes. It is also possible to provide a system of axioms for the higher-dimensional affine spaces which does not refer to the corresponding projective space.[11]