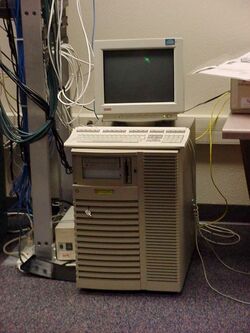 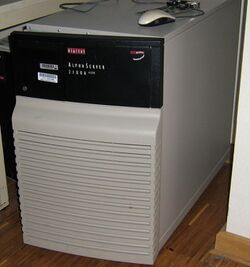 AlphaServer is the name given to a series of server computers, produced from 1994 onwards by Digital Equipment Corporation, and later by Compaq and HP. As the name suggests, the AlphaServers were based on the DEC Alpha 64-bit microprocessor. Supported operating systems for AlphaServers are Tru64 UNIX (formerly Digital UNIX), OpenVMS, MEDITECH MAGIC[1] and Windows NT (on earlier systems, with AlphaBIOS ARC firmware), while enthusiasts have provided alternative operating systems such as Linux, NetBSD, OpenBSD and FreeBSD.

Some AlphaServer models were rebadged in white enclosures as Digital Servers for the Windows NT server market. These so-called "white box" models comprised the following:

As part of the roadmap to phase out Alpha-, MIPS- and PA-RISC-based systems in favor of Itanium-based systems at HP, the most recent AlphaServer systems reached their end of general availability on 27 April 2007. The availability of upgrades and options was discontinued on 25 April 2008, approximately one year after the systems were discontinued. Support for the most recent AlphaServer systems, the DS15A, DS25, ES45, ES47, ES80 and GS1280 is being provided by HP Services as of 2008. These systems are scheduled to reach end of support sometime during 2012, although HP has stated that this event may be delayed.[2]

In approximate chronological order, the following AlphaServer models were produced:

The AlphaServer SC was a supercomputer constructed from a set of individual DS20L, ES40 or ES45 servers (called "nodes") mounted in racks. Every node was connected to every other node using a Quadrics elan3 interconnect and the systems were designed and used primarily for high-performance technical computing. An AlphaServer SC45 supercomputer was still ranked #6 in the world as late as November 2004.[8]