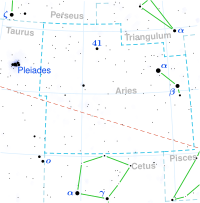 Bharani (Devanagari: भरणी) is the second nakshatra in Hindu astronomy, corresponding to 35, 39, and 41 Arietis all together. In Jyotiṣa, Bharani is ruled by Shukra (the planet Venus). Also, it is classified as a Cruel or Active nakshatra, meaning that, under electional astrological beliefs, works of a harmful or deceptive nature are best conducted while the moon is Bharani.[1]

Bharani is seen as being under the domain of Yama, the god of death or Kālī. [2][3]

Traditional Hindu given names are determined by which pada (quarter) of a nakshatra the Ascendant/Lagna was in at the time of birth. The given name would begin with the following syllables: