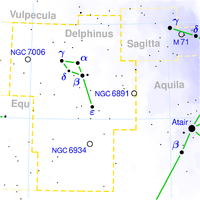 Dhanishtha (Devanagari: धनिष्ठा), (Tamil: அவிட்டம்), (Malayalam: അവിട്ടം), (Telugu: ధనిష్ఠ) and (Kannada: ಧನಿಷ್ಠಾ) is the twenty-third nakshatra in Hindu astronomy, corresponding to α to δ Delphini. It is also known as Avittam in Malayalam and Tamil.[1] Since it is the 23rd Nakshatra, the number 23 is always known as "The Royal Number" and the number is associated with the majestic "King of the Beasts" known as the Lion. In Jyotiṣa, Dhanishta is ruled by Mangala (the planet Mars). Dhanishta is classified as a movable nakshatra, meaning that, under electional astrological beliefs, it is best to begin activities like travel when the moon is in Dhanishta.[2]. This is based on the Panchanga reading only (which is also known as a calendar to track the suitable day for doing or starting anything good).

The deities which preside over Dhanishta are the Ashta Vasus: Agni, Prithvi, Vāyu, Varuna, Dyaus, Surya, Chandramas and Dhruva. The powers bestowed by the Ashta Vasus comes under the domain of Lord Nataraja who is the main supreme deity of this nakshatra. The animal associated to this nakshatra is a male lion and itis symbolized as "A Lion which is resting majestically after a Lion's share" but it's always misinterpreted as a lioness which is originally the animal associated for Purva Bhadrapada nakshatra. The symbol that is most commonly used to represent Dhanishta is the drum known as the Udukai in Tamil and Damaru in Sanskrit.[3]

Traditional Hindu given names are determined by which pada (quarter) of a nakshatra the Ascendant/Lagna was in at the time of birth. In the case of Dhanista, the given name would begin with the following syllables: