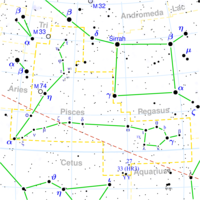 Revathi is the Hindu name for Zeta Piscium, a star on the edge of the Pisces zodiac constellation. In Hindu sidereal astronomy this star is identified as the First Point of Aries, i.e. when the Sun crosses this star, a new solar year begins.

Revati (Devanagari: रेवती) is the twenty-seventh nakshatra in Hindu astrology (or the 28th, if Abhijit is counted) corresponding to ζ Piscium. It is ruled by Puṣan,one of the 12 Ādityas. According to the beliefs of traditional electional astrology, Revati is a sweet or delicate nakshatra, meaning that while Revati has the most influence, it is best to begin working on things of physical beauty like music and jewellery .[1]

Revati is symbolized by fish (often a pair of fish). It is also associated with the sea.[2]

Traditional Hindu given names are determined by which pada (quarter) of a nakshatra the Ascendant/Lagna was in at the time of birth. In the case of Revati, the given name would begin with the following syllables: