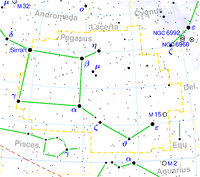 Pūrva Bhādrapadā (Devanagari: पूर्वभाद्र)(Tamil: பூரட்டாதி)(Telugu: పూర్వ భాద్రపద) is the twenty-fifth nakshatra in Hindu astrology, corresponding to α and β Pegasi. It is placed under the domain of Bṛhaspati, the deity represented by the planet Jupiter.[1] Practitioners of electional astrology see Pūrva Bhādrapadā as a Cruel sign, meaning that activities related to deception, craftiness or wickedness are best begin while this sign is in prominence.[2]

Like its twin, Uttara Bhādrapadā, Pūrva Bhādrapadā is often represented by dualistic imagery, such as a two-headed man, or two legs of a bed. Crossed swords can also be used to symbolize this nakshatra.[3] Its patron deity is the serpent Ajaikapada. The animal associated with this nakshatra is a male lion.

The Ascendant/Lagna in Pūrva Bhādrapadā indicates a person who is passionate and transformational, but a little extreme and indulgent. They are idealists and non-conformists and are good influencers of others and speakers and orators, but they can also be fearful, nervous, cynical and eccentric.

Traditional Hindu given names are determined by which pada (quarter) of a nakshatra the Ascendant/Lagna was in at the time of birth. The given name would begin with the following syllables: