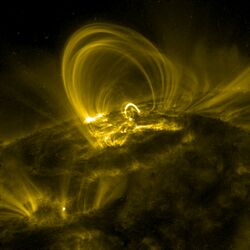 In solar physics, a coronal loop is a well-defined arch-like structure in the Sun's atmosphere made up of relatively dense plasma confined and isolated from the surrounding medium by magnetic flux tubes. Coronal loops begin and end at two footpoints on the photosphere and project into the transition region and lower corona. They typically form and dissipate over periods of seconds to days[1] and may span anywhere from 1 to 1,000 megametres (621 to 621,000 mi) in length.[2]

Coronal loops are often associated with the strong magnetic fields located within active regions and sunspots. The number of coronal loops varies with the 11 year solar cycle. 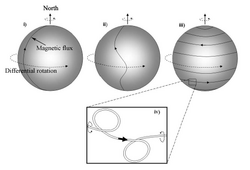 A diagram showing the evolution of the solar magnetic flux over one solar cycle. 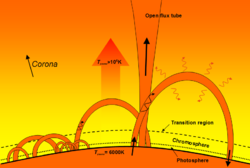 Diagram of the low corona and transition region, where many scales of coronal loops can be observed.

Due to a natural process called the solar dynamo driven by heat produced in the Sun's core, convective motion of the electrically conductive plasma which makes up the Sun creates electric currents, which in turn create powerful magnetic fields in the Sun's interior. These magnetic fields are in the form of closed loops of magnetic flux, which are twisted and tangled by solar differential rotation, the different rotation rates of the plasma at different latitudes of the solar sphere. A coronal loop occurs when a curved arc of the magnetic field projects through the visible surface of the Sun, the photosphere, protruding into the solar atmosphere.

Within a coronal loop, the paths of the moving electrically charged particles which make up its plasma—electrons and ions—are sharply bent by the Lorentz force when moving transverse to the loop's magnetic field. As a result, they can only move freely parallel to the magnetic field lines, tending to spiral around these lines. Thus, the plasma within a coronal loop cannot escape sideways out of the loop and can only flow along its length. This is known as the frozen-in condition.[3]

Coronal loops form in a wide range of sizes, from 10 km to 10,000 km. A related phenomenon, open flux tubes of magnetic field extend from the surface far into the corona and heliosphere and are the source of the Sun's large scale magnetic field (magnetosphere) and the solar wind. Coronal loops have a wide variety of temperatures along their lengths. Loops at temperatures below 1 megakelvin (MK) are generally known as cool loops, those existing at around 1 MK are known as warm loops, and those beyond 1 MK are known as hot loops. Naturally, these different categories radiate at different wavelengths.[4] 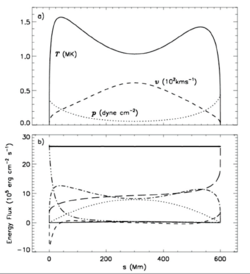 A modelled example of a quiescent coronal loop (energy contributions).

A closed loop of magnetic field, a flux tube above the solar surface, does not by itself constitute a coronal loop; it must be filled with plasma before it can be called a coronal loop. With this in mind, it becomes clear that coronal loops are a rarity on the solar surface, as the majority of closed-flux structures are empty. This means the mechanism that heats the corona and injects chromospheric plasma into the closed magnetic flux is highly localised.[7] The mechanism behind plasma filling, dynamic flows and coronal heating remains a mystery. The mechanism(s) must be stable enough to continue to feed the corona with chromospheric plasma and powerful enough to accelerate and therefore heat the plasma from 6000 K to well over 1 MK over the short distance from the chromosphere and transition region to the corona. This is the very reason coronal loops are targeted for intense study. They are anchored to the photosphere, are fed by chromospheric plasma, protrude into the transition region and exist at coronal temperatures after undergoing intensive heating.

Many strides have been made by ground-based telescopes (such as the Mauna Loa Solar Observatory, MLSO, in Hawaii) and eclipse observations of the corona, but to escape the obscuring effect of the Earth's atmosphere, space-based observations have become a necessary evolution for solar physics. Beginning with the short (seven-minute) Aerobee rocket flights in 1946 and 1952, spectrograms measured solar extreme ultraviolet (EUV) and Lyman-α emissions. Basic X-ray observations were attained by 1960 using such rockets. The British Skylark rocket missions from 1959 to 1978 also returned mainly X-ray spectrometer data.[8] Although successful, the rocket missions were very limited in lifetime and payload. During the period of 1962–1975, the satellite series Orbiting Solar Observatory (OSO-1 to OSO-8) were able to gain extended EUV and X-ray spectrometer observations. Then, in 1973, Skylab was launched and began a new multi-wavelength campaign that typified future observatories.[9] This mission lasted only a year and was superseded by the Solar Maximum Mission, which became the first observatory to last the majority of a solar cycle (from 1980 to 1989).[10] A wealth of data was accumulated across the whole range of emission. 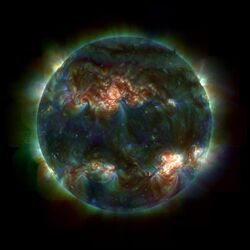 Full-disk mosaic of the million-degree Sun by TRACE.

The solar community was rocked by the launch of Yohkoh (Solar A) from Kagoshima Space Centre in August 1991. It was lost on 14 December 2001 due to battery failure but revolutionised X-ray observations in its decade of operations. Yohkoh (or Sunbeam) orbited the Earth in an elliptical orbit, observing X-ray and γ-ray emissions from solar phenomena such as solar flares. Yohkoh carried four instruments. The Bragg Crystal Spectrometer (BCS), the Wide Band Spectrometer (WBS), the Soft X-Ray Telescope (SXT) and the Hard X-Ray Telescope (HXT) were operated by a consortium of scientists from Japan, the US and the UK. Of particular interest is the SXT instrument for observing X-ray-emitting coronal loops.

The SXT instrument observed X-rays in the 0.25–4.0 keV range, resolving solar features to 2.5 arc seconds with a temporal resolution of 0.5–2 seconds. SXT was sensitive to plasma in the 2–4 MK temperature range, making it an ideal observational platform to compare with data collected from TRACE coronal loops radiating in the EUV wavelengths.[11]

The next major step in solar physics came at the launch of the Solar and Heliospheric Observatory (SOHO) in December 1995 from Cape Canaveral Air Force Station in Florida, USA. SOHO originally had an operational lifetime of two years. The mission was extended to March 2007 due to its resounding success, allowing SOHO to observe a complete 11-year solar cycle. SOHO continually faces the Sun holding a slow orbit around the First Lagrangian Point (L1), where the gravitational balance between the Sun and Earth provides a stable position for SOHO to orbit. SOHO is continually eclipsing the Sun from the Earth at a distance of approximately 1.5 million kilometres.

SOHO is managed by scientists from the European Space Agency (ESA) and NASA. Containing more instruments than both TRACE and Yohkoh, this large solar mission was designed to look at the chain from the solar interior, the solar corona to the solar wind. SOHO has 12 instruments on board, including the Coronal Diagnostic Spectrometer (CDS), the Extreme ultraviolet Imaging Telescope (EIT), the Solar Ultraviolet Measurements of Emitted Radiation (SUMER) and the UltraViolet Coronagraph Spectrometer (UVCS), which are all used extensively in the study of the transition region and corona.

The Transition Region And Coronal Explorer (TRACE) was launched in April 1998 from Vandenberg Air Force Base as part of NASA's Goddard Space Flight Center Small Explorer (SMEX) project. The small orbiting instrument has a 30×160 cm, 8.66 m focal length Cassegrain telescope with a 1200×1200px CCD detector. The timing of the launch was planned to coincide with the rising phase of the solar maximum. Observations of the transition region and lower corona could then be carried out in conjunction with SOHO to give an unprecedented view of the solar environment during this exciting phase of the solar cycle.

Due to the high spatial (1 arc second) and temporal resolution (1–5 seconds), TRACE has been able to capture highly detailed images of coronal structures, whilst SOHO provides the global (lower resolution) picture of the Sun. This campaign demonstrates the observatory's ability to track the evolution of steady-state (or quiescent) coronal loops. TRACE utilizes filters that are sensitive to electromagnetic radiation in the 171 Å FeIX, 195 Å FeXII, 284 Å FeXV, 1216 Å HI, 1550 Å CIV and 1600 Å range. Of particular interest are the 171 Å, 195 Å and 284 Å band passes, as they are sensitive to the radiation emitted by quiescent coronal loops.

All of the above space missions have been highly successful in observing strong plasma flows and highly dynamic processes in coronal loops. For example, SUMER observations suggest flow velocities of 5–16 km/s in the solar disk, and other joint SUMER/TRACE observations detect flows of 15–40 km/s.[12][13] Very high velocities have been detected by the Flat Crystal Spectrometer (FCS) on board the Solar Maximum Mission, where plasma velocities were found in the range of 40–60 km/s.