(Redirected from Astronomy:Planck particle)
Short description: Model of the evolution of the universe 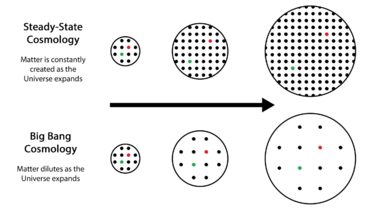 In the Big Bang, the expanding Universe causes matter to dilute over time, while in the Steady-State Theory, continued matter creation ensures that the density remains constant over time.

In cosmology, the steady-state model is an alternative to the Big Bang theory of evolution of the universe. In the steady-state model, the density of matter in the expanding universe remains unchanged due to a continuous creation of matter, thus adhering to the perfect cosmological principle, a principle that asserts that the observable universe is practically the same at any time and any place.

While the steady-state model enjoyed some minority support in the scientific mainstream until the mid-20th century, it is now rejected by the vast majority of cosmologists, astrophysicists and astronomers, as the observational evidence points to a hot Big Bang cosmology with a finite age of the universe, which the steady-state model does not predict.[1][2]

In the 13th century, Siger of Brabant authored the thesis The Eternity of the World, which argued that there was no first man, and no first specimen of any particular: the physical universe is thus without any first beginning, and therefore eternal. Siger's views were condemned by the pope in 1277.

Cosmological expansion was originally discovered through observations by Edwin Hubble. Theoretical calculations also showed that the static universe as modeled by Einstein (1917) was unstable. The modern Big Bang theory, first advanced by Father Georges Lemaître, is one in which the universe has a finite age and has evolved over time through cooling, expansion, and the formation of structures through gravitational collapse.

The steady-state model asserts that although the universe is expanding, it nevertheless does not change its appearance over time (the perfect cosmological principle); the universe has no beginning and no end. This required that matter be continually created in order to keep the universe's density from decreasing. Influential papers on steady-state cosmologies were published by Hermann Bondi, Thomas Gold, and Fred Hoyle in 1948.[3][4] Similar models had been proposed earlier by William Duncan MacMillan, among others.[5]

It is now known that Albert Einstein considered a steady-state model of the expanding universe, as indicated in a 1931 manuscript, many years before Hoyle, Bondi and Gold. However, he quickly abandoned the idea.[6]

Problems with the steady-state model began to emerge in the 1950s and 60s, when observations began to support the idea that the universe was in fact changing: bright radio sources (quasars and radio galaxies) were found only at large distances (therefore could have existed only in the distant past due to the effects of the speed of light on astronomy), not in closer galaxies. Whereas the Big Bang theory predicted as much, the steady-state model predicted that such objects would be found throughout the universe, including close to our own galaxy. By 1961, statistical tests based on radio-source surveys[7] had ruled out the steady-state model in the minds of most cosmologists, although some proponents of the steady state insisted that the radio data were suspect.

The steady state model does not appear to agree with the observed dL versus z relation or with source counts ... In a sense, this disagreement is a credit to the model; alone among all cosmologies, the steady state model makes such definite predictions that it can be disproved even with the limited observational evidence at our disposal. The steady state model is so attractive that many of its adherents still retain hope that the evidence against it will eventually disappear as observations improve. However, if the cosmic microwave radiation ... is really black-body radiation, it will be difficult to doubt that the universe has evolved from a hotter denser early stage.[8]

Since this discovery, the Big Bang theory has been considered to provide the best explanation of the origin of the universe. In most astrophysical publications, the Big Bang is implicitly accepted and is used as the basis of more complete theories.

Quasi-steady-state cosmology (QSS) was proposed in 1993 by Fred Hoyle, Geoffrey Burbidge, and Jayant V. Narlikar as a new incarnation of the steady-state ideas meant to explain additional features unaccounted for in the initial proposal. The model suggests pockets of creation occurring over time within the universe, sometimes referred to as minibangs, mini-creation events, or little bangs.[9] After the observation of an accelerating universe, further modifications of the model were made.[10] The Planck particle is a hypothetical black hole whose Schwarzschild radius is approximately the same as its Compton wavelength; the evaporation of such a particle has been evoked as the source of light elements in an expanding steady-state universe.[11]

Astrophysicist and cosmologist Ned Wright has pointed out flaws in the model.[12] These first comments were soon rebutted by the proponents.[13] Wright and other mainstream cosmologists reviewing QSS have pointed out new flaws and discrepancies with observations left unexplained by proponents.[14]