listen); 9 October 1873 – 11 May 1916) was a Germany physicist and astronomer. He was also the father of astrophysicist Martin Schwarzschild.

Schwarzschild accomplished this while serving in the German army during World War I. He died the following year from the autoimmune disease pemphigus, which he developed while at the Russian front. Various forms of the disease particularly affect people of Ashkenazi Jewish origin.

Asteroid 837 Schwarzschilda is named in his honour, as is the large crater Schwarzschild, on the far side of the Moon.[2]

Karl Schwarzschild was born on the 9th of October 1873 in Frankfurt on Main to Jewish parents. His father was active in the business community of the city, and the family had ancestors in the city dating back to the sixteenth century.[3] Karl attended a Jewish primary school until 11 years of age.[4] He was something of a child prodigy, having two papers on binary orbits (celestial mechanics) published before he was sixteen.[5] He studied at Strasbourg and Munich, obtaining his doctorate in 1896 for a work on Henri Poincaré's theories.

From 1897, he worked as assistant at the Kuffner Observatory in Vienna.

From 1901 until 1909 he was a professor at the prestigious institute at Göttingen, where he had the opportunity to work with some significant figures, including David Hilbert and Hermann Minkowski. Schwarzschild became the director of the observatory in Göttingen. He married Else Rosenbach, the daughter of a professor of surgery at Göttingen, in 1909, and later that year moved to Potsdam, where he took up the post of director of the Astrophysical Observatory. This was then the most prestigious post available for an astronomer in Germany. He and Else had three children, Agathe (who was a Classics professor at the University of Otago in Dunedin, New Zealand), Martin (who went on to become a professor of astronomy at Princeton University), and Alfred. 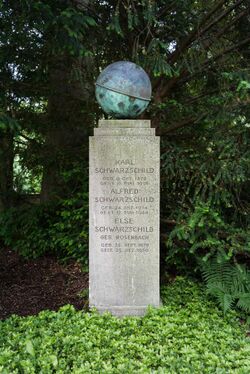 From 1912, Schwarzschild was a member of the Prussian Academy of Sciences.

At the outbreak of World War I in 1914 he joined the German army, despite being over 40 years old. He served on both the western and eastern fronts, rising to the rank of lieutenant in the artillery.

While serving on the front in Russia in 1915, he began to suffer from a rare and painful autoimmune skin disease called pemphigus. Nevertheless, he managed to write three outstanding papers, two on the theory of relativity and one on quantum theory. His papers on relativity produced the first exact solutions to the Einstein field equations, and a minor modification of these results gives the well-known solution that now bears his name — the Schwarzschild metric.

Schwarzschild's struggle with pemphigus may have eventually led to his death on 11 May 1916.

Thousands of dissertations, articles, and books have since been devoted to the study of Schwarzschild's solutions to the Einstein field equations. However, although Schwarzschild's best known work lies in the area of general relativity, his research interests were extremely broad, including work in celestial mechanics, observational stellar photometry, quantum mechanics, instrumental astronomy, stellar structure, stellar statistics, Halley's comet, and spectroscopy.[6]

Some of his particular achievements include measurements of variable stars, using photography, and the improvement of optical systems, through the perturbative investigation of geometrical aberrations.

According to Wolfgang Pauli (Theory of relativity), Schwarzschild is the first to introduce the correct Lagrangian formalism of the electromagnetic field [7] as 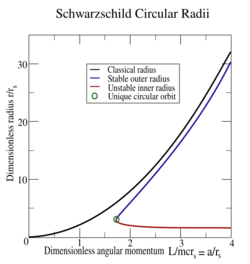 The Kepler problem in general relativity, using the Schwarzschild metric

Einstein himself was pleasantly surprised to learn that the field equations admitted exact solutions, because of their prima facie complexity, and because he himself had only produced an approximate solution. Einstein's approximate solution was given in his famous 1915 article on the advance of the perihelion of Mercury. There, Einstein used rectangular coordinates to approximate the gravitational field around a spherically symmetric, non-rotating, non-charged mass. Schwarzschild, in contrast, chose a more elegant "polar-like" coordinate system and was able to produce an exact solution which he first set down in a letter to Einstein of 22 December 1915, written while Schwarzschild was serving in the war stationed on the Russian front. Schwarzschild concluded the letter by writing: "As you see, the war treated me kindly enough, in spite of the heavy gunfire, to allow me to get away from it all and take this walk in the land of your ideas."[12] In 1916, Einstein wrote to Schwarzschild on this result:

I have read your paper with the utmost interest. I had not expected that one could formulate the exact solution of the problem in such a simple way. I liked very much your mathematical treatment of the subject. Next Thursday I shall present the work to the Academy with a few words of explanation.
—Albert Einstein, [6] 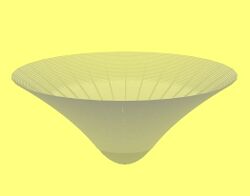 where G is the gravitational constant, M is the mass of the central body, and c is the speed of light in a vacuum.[13] In cases where the radius of the central body is less than the Schwarzschild radius, [math]\displaystyle{ R_{s} }[/math] represents the radius within which all massive bodies, and even photons, must inevitably fall into the central body (ignoring quantum tunnelling effects near the boundary). When the mass density of this central body exceeds a particular limit, it triggers a gravitational collapse which, if it occurs with spherical symmetry, produces what is known as a Schwarzschild black hole. This occurs, for example, when the mass of a neutron star exceeds the Tolman-Oppenheimer-Volkoff limit (about three solar masses).

Schwarzschild's Cat is a comic on XKCD.com comparing the size and cuteness of cats.