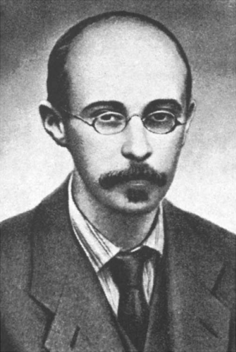 The Friedmann equations are a set of equations in physical cosmology that govern the expansion of space in homogeneous and isotropic models of the universe within the context of general relativity. They were first derived by Alexander Friedmann in 1922 from Einstein's field equations of gravitation for the Friedmann–Lemaître–Robertson–Walker metric and a perfect fluid with a given mass density ρ and pressure p.[1] The equations for negative spatial curvature were given by Friedmann in 1924.[2]

where ds32 is a three-dimensional metric that must be one of (a) flat space, (b) a sphere of constant positive curvature or (c) a hyperbolic space with constant negative curvature. This metric is called Friedmann–Lemaître–Robertson–Walker (FLRW) metric. The parameter k discussed below takes the value 0, 1, −1, or the Gaussian curvature, in these three cases respectively. It is this fact that allows us to sensibly speak of a "scale factor" a(t).

Einstein's equations now relate the evolution of this scale factor to the pressure and energy of the matter in the universe. From FLRW metric we compute Christoffel symbols, then the Ricci tensor. With the stress–energy tensor for a perfect fluid, we substitute them into Einstein's field equations and the resulting equations are described below.

There are two independent Friedmann equations for modelling a homogeneous, isotropic universe. The first is:

which is derived from the 00 component of Einstein's field equations. The second is:

which is derived from the first together with the trace of Einstein's field equations (the dimension of the two equations is time−2).

a is the scale factor, G, Λ, and c are universal constants (G is Newton's gravitational constant, Λ is the cosmological constant with dimension length−2, and c is the speed of light in vacuum). ρ and p are the volumetric mass density (and not the volumetric energy density) and the pressure, respectively. k is constant throughout a particular solution, but may vary from one solution to another.

In previous equations, a, ρ, and p are functions of time. k/a2 is the spatial curvature in any time-slice of the universe; it is equal to one-sixth of the spatial Ricci curvature scalar R since

in the Friedmann model. H ≡ ȧ/a is the Hubble parameter.

We see that in the Friedmann equations, a(t) does not depend on which coordinate system we chose for spatial slices. There are two commonly used choices for a and k which describe the same physics:

Using the first equation, the second equation can be re-expressed as

which eliminates Λ and expresses the conservation of mass–energy:

These equations are sometimes simplified by replacing

The simplified form of the second equation is invariant under this transformation.

The Hubble parameter can change over time if other parts of the equation are time dependent (in particular the mass density, the vacuum energy, or the spatial curvature). Evaluating the Hubble parameter at the present time yields Hubble's constant which is the proportionality constant of Hubble's law. Applied to a fluid with a given equation of state, the Friedmann equations yield the time evolution and geometry of the universe as a function of the fluid density.

Some cosmologists call the second of these two equations the Friedmann acceleration equation and reserve the term Friedmann equation for only the first equation.

To date, the critical density is estimated to be approximately five atoms (of monatomic hydrogen) per cubic metre, whereas the average density of ordinary matter in the Universe is believed to be 0.2–0.25 atoms per cubic metre.[4][5] 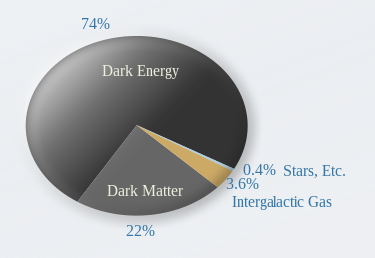 Estimated relative distribution for components of the energy density of the universe. Dark energy dominates the total energy (74%) while dark matter (22%) constitutes most of the mass. Of the remaining baryonic matter (4%), only one tenth is compact. In February 2015, the European-led research team behind the Planck cosmology probe released new data refining these values to 4.9% ordinary matter, 25.9% dark matter and 69.1% dark energy.

A much greater density comes from the unidentified dark matter; both ordinary and dark matter contribute in favour of contraction of the universe. However, the largest part comes from so-called dark energy, which accounts for the cosmological constant term. Although the total density is equal to the critical density (exactly, up to measurement error), the dark energy does not lead to contraction of the universe but rather may accelerate its expansion. Therefore, the universe will likely expand forever.[6]

An expression for the critical density is found by assuming Λ to be zero (as it is for all basic Friedmann universes) and setting the normalised spatial curvature, k, equal to zero. When the substitutions are applied to the first of the Friedmann equations we find:

The density parameter (useful for comparing different cosmological models) is then defined as:

This term originally was used as a means to determine the spatial geometry of the universe, where ρc is the critical density for which the spatial geometry is flat (or Euclidean). Assuming a zero vacuum energy density, if Ω is larger than unity, the space sections of the universe are closed; the universe will eventually stop expanding, then collapse. If Ω is less than unity, they are open; and the universe expands forever. However, one can also subsume the spatial curvature and vacuum energy terms into a more general expression for Ω in which case this density parameter equals exactly unity. Then it is a matter of measuring the different components, usually designated by subscripts. According to the ΛCDM model, there are important components of Ω due to baryons, cold dark matter and dark energy. The spatial geometry of the universe has been measured by the WMAP spacecraft to be nearly flat. This means that the universe can be well approximated by a model where the spatial curvature parameter k is zero; however, this does not necessarily imply that the universe is infinite: it might merely be that the universe is much larger than the part we see. (Similarly, the fact that Earth is approximately flat at the scale of the Netherlands does not imply that the Earth is flat: it only implies that it is much larger than the Netherlands.)

The first Friedmann equation is often seen in terms of the present values of the density parameters, that is[7]

Here Ω0,R is the radiation density today (when a = 1), Ω0,M is the matter (dark plus baryonic) density today, Ω0,k = 1 − Ω0 is the "spatial curvature density" today, and Ω0,Λ is the cosmological constant or vacuum density today.

where p is the pressure, ρ is the mass density of the fluid in the comoving frame and w is some constant.

In spatially flat case (k = 0), the solution for the scale factor is

where a0 is some integration constant to be fixed by the choice of initial conditions. This family of solutions labelled by w is extremely important for cosmology. For example, w = 0 describes a matter-dominated universe, where the pressure is negligible with respect to the mass density. From the generic solution one easily sees that in a matter-dominated universe the scale factor goes as

Another important example is the case of a radiation-dominated universe, namely when w = 1/3. This leads to

Note that this solution is not valid for domination of the cosmological constant, which corresponds to an w = −1. In this case the energy density is constant and the scale factor grows exponentially.

Solutions for other values of k can be found at Tersic, Balsa. "Lecture Notes on Astrophysics". https://www.academia.edu/5025956/PHYS652_notes.

If the matter is a mixture of two or more non-interacting fluids each with such an equation of state, then

holds separately for each such fluid f. In each case,

from which we get

For example, one can form a linear combination of such terms

and solves for a as a function of time.

To make the solutions more explicit, we can derive the full relationships from the first Friedman equation:

Solutions for the dependence of the scale factor with respect to time for universes dominated by each component can be found. In each we also have assumed that Ω0,k ≈ 0, which is the same as assuming that the dominating source of energy density is approximately 1.

which recovers the aforementioned a ∝ t2/3

For Λ-dominated universes, where Ω0,Λ ≫ Ω0,R and Ω0,M, as well as Ω0,Λ ≈ 1, and where we now will change our bounds of integration from ti to t and likewise ai to a:

The Λ-dominated universe solution is of particular interest because the second derivative with respect to time is positive, non-zero; in other words implying an accelerating expansion of the universe, making ρΛ a candidate for dark energy:

Where by construction ai > 0, our assumptions were Ω0,Λ ≈ 1, and H0 has been measured to be positive, forcing the acceleration to be greater than zero.

where a0 and H0 are separately the scale factor and the Hubble parameter today. Then we can have

For any form of the effective potential Ueff(ã), there is an equation of state p = p(ρ) that will produce it.