Short description: Project to measure the expansion of the universe

The Dark Energy Survey (DES) is an astronomical survey designed to constrain the properties of dark energy. It uses images taken in the near-ultraviolet, visible, and near-infrared to measure the expansion of the Universe using Type Ia supernovae, baryon acoustic oscillations, the number of galaxy clusters, and weak gravitational lensing.[1] The collaboration is composed of research institutions and universities from the United States,[2] Australia, Brazil,[3] the United Kingdom, Germany, Spain, and Switzerland. The collaboration is divided into several scientific working groups. The director of DES is Josh Frieman.[4]

The DES began by developing and building Dark Energy Camera (DECam), an instrument designed specifically for the survey.[5] This camera has a wide field of view and high sensitivity, particularly in the red part of the visible spectrum and in the near infrared.[6] Observations were performed with DECam mounted on the 4-meter Victor M. Blanco Telescope, located at the Cerro Tololo Inter-American Observatory (CTIO) in Chile.[6] Observing sessions ran from 2013 to 2019; (As of 2021) the DES collaboration has published results from the first three years of the survey.[7] 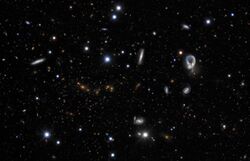 DECam, short for the Dark Energy Camera, is a large camera built to replace the previous prime focus camera on the Victor M. Blanco Telescope. The camera consists of three major components: mechanics, optics, and CCDs.

The mechanics of the camera consists of a filter changer with an 8-filter capacity and shutter. There is also an optical barrel that supports 5 corrector lenses, the largest of which is 98 cm in diameter. These components are attached to the CCD focal plane which is cooled to −100 °C with liquid nitrogen in order to reduce thermal noise in the CCDs. The focal plane is also kept in an extremely low vacuum of 10−6 Torr to prevent the formation of condensation on the sensors. The entire camera with lenses, filters, and CCDs weighs approximately 4 tons. When mounted at the prime focus it was supported with a hexapod system allowing for real time focal adjustment.[9]

The camera is outfitted with u, g, r, i, z, and Y filters spaccing roughly from 340–1070 nm,[10] similar to those used in the Sloan Digital Sky Survey (SDSS). This allows DES to obtain photometric redshift measurements to z≈1. DECam also contains five lenses acting as corrector optics to extend the telescope's field of view to a diameter of 2.2°, one of the widest fields of view available for ground-based optical and infrared imaging.[6] One significant difference between previous charge-coupled devices (CCD) at the Victor M. Blanco Telescope and DECam is the improved quantum efficiency in the red and near-infrared wavelengths.[11][9] 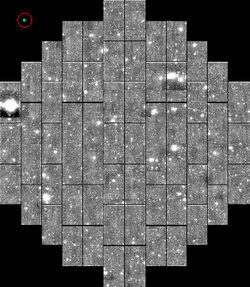 Simulated image of the DECam CCD array at focal plane. Each large rectangle is a single CCD. The green rectangle circled in red in the upper left corner shows the size of the iPhone 4 camera CCD at the same scale. 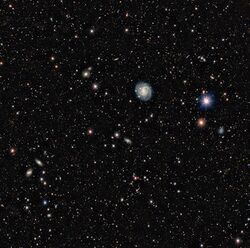 The scientific sensor array on DECam is an array of 62 2048×4096 pixel back-illuminated CCDs totaling 520 megapixels; an additional 12 2048×2048 pixel CCDs (50 Mpx) are used for guiding the telescope, monitoring focus, and alignment. The full DECam focal plane contains 570 megapixels. The CCDs for DECam use high resistivity silicon manufactured by Dalsa and LBNL with 15×15 micron pixels. By comparison, the OmniVision Technologies back-illuminated CCD that was used in the iPhone 4 has a 1.75×1.75 micron pixel with 5 megapixels. The larger pixels allow DECam to collect more light per pixel, improving low light sensitivity which is desirable for an astronomical instrument. DECam's CCDs also have a 250-micron crystal depth; this is significantly larger than most consumer CCDs. The additional crystal depth increases the path length travelled by entering photons. This, in turn, increases the probability of interaction and allows the CCDs to have an increased sensitivity to lower energy photons, extending the wavelength range to 1050 nm. Scientifically this is important because it allows one to look for objects at a higher redshift, increasing statistical power in the studies mentioned above. When placed in the telescope's focal plane each pixel has a width of 0.263″ on the sky, resulting in a total field of view of 3 square degrees.

DES imaged 5,000 square degrees of the southern sky in a footprint that overlaps with the South Pole Telescope and Stripe 82 (in large part avoiding the Milky Way). The survey took 758 observing nights spread over six annual sessions between August and February to complete, covering the survey footprint ten times in five photometric bands (g, r, i, z, and Y).[12] The survey reached a depth of 24th magnitude in the i band over the entire survey area. Longer exposure times and faster observing cadence were made in five smaller patches totaling 30 square degrees to search for supernovae.[13]

First light was achieved on 12 September 2012;[14] after a verification and testing period, scientific survey observations started in August 2013.[15] The last observing session was completed on 9 January 2019.[12] 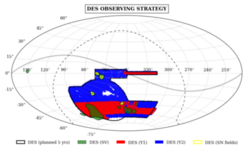 The footprint of the wide-area survey on the sky (colored region) in celestial coordinates; the dashed curve shows the approximate location of the Milky Way disk in these coordinates.

Each year from August through February, observers will stay in dormitories on the mountain. During a weeklong period of work, observers sleep during the day and use the telescope and camera at night. There will be some DES members working at the telescope console to monitor operations while others monitoring camera operations and data process.

For the wide-area footprint observations, DES takes roughly every two minutes for each new image: The exposures are typically 90 seconds long, with another 30 seconds for readout of the camera data and slewing to point the telescope at its next target. Despite the restrictions on each exposure, the team also need to consider different sky conditions for the observations, such as moonlight and cloud cover.

In order to get better images, DES team use a computer algorithm called the "Observing Tactician" (ObsTac) to help with sequencing observations. It optimizes among different factors, such as the date and time, weather conditions, and the position of the moon. ObsTac automatically points the telescope in the best direction, and selects the exposure, using the best light filter. It also decides whether to take a wide-area or time-domain survey image, depending on whether or not the exposure will also be used for super nova searches.[16] 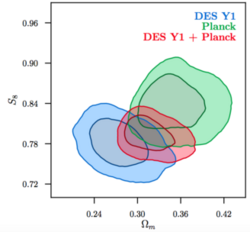 Constraints on a measure of the clumpiness of the matter distribution (S8) and the fractional density of the Universe in matter (Ωm) from the combined 3 DES Y1 measurements (blue), Planck CMB measurements (green), and their combination (red).

Weak lensing was measured statistically by measuring the shear-shear correlation function, a two-point function, or its Fourier Transform, the shear power spectrum.[26] In April 2015, the Dark Energy Survey released mass maps using cosmic shear measurements of about 2 million galaxies from the science verification data between August 2012 and February 2013.[27] In 2021 weak lensing was used to map the dark matter in a region of the southern hemisphere sky[24][25] and in 2022 together with galaxy clustering data to give new cosmological constrains.[28][29]

After Ligo detected the first gravitational wave signal from GW170817,[32] DES made follow-up observations of GW170817 using DECam. With DECam independent discovery of the optical source, DES team establish its association with GW170817 by showing that none of the 1500 other sources found within the event localization region could plausibly be associated with the event. DES team monitored the source for over two weeks and provide the light curve data as a machine-readable file. From the observation data set, DES concluded that the optical counterpart they have identified near NGC\,4993 is associated with GW170817. This discovery ushers in the era of multi-messenger astronomy with gravitational waves and demonstrates the power of DECam to identify the optical counterparts of gravitational-wave sources.[33] 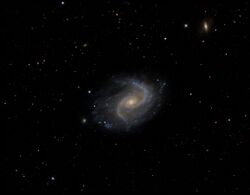 The signature of Baryon Acoustic Oscillations (BAO) can be observed in the distribution of tracers of the matter density field and used to measure the expansion history of the Universe. BAO can also be measured using purely photometric data, though at less significance.[41] DES team observation samples consists of 7 million galaxies distributed over a footprint of 4100 [math]\displaystyle{ deg^2 }[/math] with 0.6< [math]\displaystyle{ z_{photo} }[/math] < 1.1 and a typical redshift uncertainty of 0.03(1+z).[42] From their statistics, they combine the likelihoods derived from angular correlations and spherical harmonics to constrain the ratio of comoving angular diameter distance [math]\displaystyle{ D_m(Z_eff = 0.835)/r_d=18.92\pm0.51 }[/math] at the effective redshift of our sample to the sound horizon scale at the drag epoch.[43] 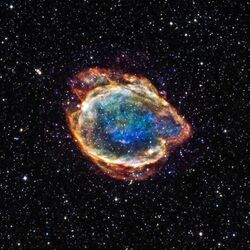 In May 2019, Dark Energy Survey team published their first cosmology results using type IA supernova. The super Nova data was from DES-SN3YR. The Dark Energy Survey team found Ωm = 0.331 ± 0.038 with a flat ΛCDM model and Ωm = 0.321 ± 0.018, w = −0.978 ± 0.059 with a flat wCDM model.[44] Analyzing the same data from DES-SN3YR, they also found a new current Hubble constant, [math]\displaystyle{ H_0= 67.1 \pm1.3 kms^{-1}Mpc^{-1} }[/math]. [45]  This result has an excellent agreement with the Hubble constant measurement from Planck Satellite Collaboration in 2018.[46] In June 2019, there is follow-up paper published by DES team discussing the systematic uncertainties, and validation of using the super nova IA to measure the cosmology results mentioned before.[47] The team also published their photometric pipeline and light curve data in another paper published in the same month.[48]

Several minor planets were discovered by DeCam in the course of The Dark Energy Survey, including high-inclination trans-Neptunian objects (TNOs).[49]

The MPC has assigned the IAU code W84 for DeCam's observations of small Solar System bodies. As of October 2019, the MPC inconsistently credits the discovery of 9 numbered minor planets, all of them trans-Neptunian objects, to either "DeCam" or "Dark Energy Survey".[59] The list does not contain any unnumbered minor planets potentially discovered by DeCam, as discovery credits are only given upon a body's numbering, which in turn depends on a sufficiently secure orbit determination.