SN 2006gy was an extremely energetic supernova, also referred to as a hypernova or quark-nova,[4] that was discovered on September 18, 2006. It was first observed by Robert Quimby and P. Mondol,[2][5] and then studied by several teams of astronomers using facilities that included the Chandra, Lick, and Keck Observatories.[6][7] In May 2007 NASA and several of the astronomers announced the first detailed analyses of the supernova, describing it as the "brightest stellar explosion ever recorded".[8] In October 2007 Quimby announced that SN 2005ap had broken SN 2006gy's record as the brightest-ever recorded supernova, and several subsequent discoveries are brighter still.[9][10] Time magazine listed the discovery of SN 2006gy as third in its Top 10 Scientific Discoveries for 2007.[11] 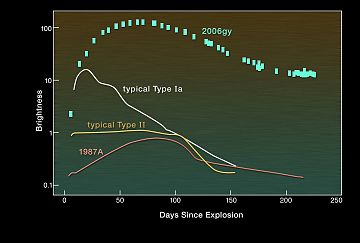 SN 2006gy is classified as a type II supernova because it showed lines of hydrogen in its spectrum, although the extreme brightness indicates that it is different from the typical type II supernova. Several possible mechanisms have been proposed for such a violent explosion, all requiring a very massive progenitor star.[10] The most likely explanations involve the efficient conversion of explosive kinetic energy to radiation by interaction with circumstellar material, similar to a type IIn supernova but on a larger scale. Such a scenario might occur following mass loss of 10 or more M☉ in a luminous blue variable eruption, or through pulsational pair instability ejections.[12] Denis Leahy and Rachid Ouyed, Canadian scientists from the University of Calgary, have proposed that SN 2006gy was the birth of a quark star.[13]

Eta Carinae (η Carinae or η Car) is a highly luminous hypergiant star located approximately 7,500 light-years from Earth in the Milky Way galaxy. Since Eta Carinae is 32,000 times closer than SN 2006gy, the light from it will be about a billion-fold brighter. It is estimated to be similar in size to the star which became SN 2006gy. Dave Pooley, one of the discoverers of SN 2006gy, says that if Eta Carinae exploded in a similar fashion, it would be bright enough that one could read by its light on Earth at night, and would even be visible during the daytime. SN 2006gy's apparent magnitude (m) is 15,[2] so a similar event at Eta Carinae will have an m of about −7.5. According to astrophysicist Mario Livio, this could happen at any time, but the risk to life on Earth would be low.[14]