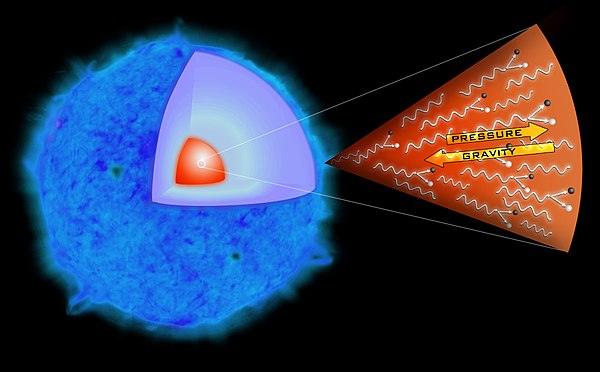 When a star is very massive, the gamma rays produced in its core can become so energetic that some of their energy is drained away into production of particle and antiparticle pairs. The resulting drop in radiation pressure causes the star to partially collapse under its own huge gravity. After this violent collapse, runaway thermonuclear reactions (not shown here) ensue and the star explodes.

A pair-instability supernova is a type of supernova predicted to occur when pair production, the production of free electrons and positrons in the collision between atomic nuclei and energetic gamma rays, temporarily reduces the internal radiation pressure supporting a supermassive star's core against gravitational collapse.[1] This pressure drop leads to a partial collapse, which in turn causes greatly accelerated burning in a runaway thermonuclear explosion, resulting in the star being blown completely apart without leaving a stellar remnant behind.[2]

Pair-instability supernovae can only happen in stars with a mass range from around 130 to 250 solar masses and low to moderate metallicity (low abundance of elements other than hydrogen and helium – a situation common in Population III stars).

In very massive, hot stars with interior temperatures above about 300000000 K (3×108 K), photons produced in the stellar core are primarily in the form of very high energy-level gamma rays. The pressure from these gamma rays fleeing outward from the core helps to hold up the upper layers of the star against the inward pull of gravity. If the level of gamma rays (the energy density) is reduced, then the outer layers of the star will begin to collapse inwards.

Gamma rays with sufficiently high energy can interact with nuclei, electrons, or one another. One of those interactions is to form pairs of particles, such as electron-positron pairs, and these pairs can also meet and annihilate each other to create gamma rays again, all in accordance with Albert Einstein's mass-energy equivalence equation E = m c² .

At the very high density of a large stellar core, pair production and annihilation occur rapidly. Gamma rays, electrons, and positrons are overall held in thermal equilibrium, ensuring the star's core remains stable. By random fluctuation, the sudden heating and compression of the core can generate gamma rays energetic enough to be converted into an avalanche of electron-positron pairs. This reduces the pressure. When the collapse stops, the positrons find electrons and the pressure from gamma rays is driven up, again. The population of positrons provides a brief reservoir of new gamma rays as the expanding supernova's core pressure drops.

As temperatures and gamma ray energies increase, more and more gamma ray energy is absorbed in creating electron–positron pairs. This reduction in gamma ray energy density reduces the radiation pressure that resists gravitational collapse and supports the outer layers of the star. The star contracts, compressing and heating the core, thereby increasing the rate of energy production. This increases the energy of the gamma rays that are produced, making them more likely to interact, and so increases the rate at which energy is absorbed in further pair production. As a result, the stellar core loses its support in a runaway process, in which gamma rays are created at an increasing rate; but more and more of the gamma rays are absorbed to produce electron–positron pairs, and the annihilation of the electron–positron pairs is insufficient to halt further contraction of the core, resulting in a supernova.

For a star to undergo pair-instability supernova, the increased creation of positron/electron pairs by gamma ray collisions must reduce outward pressure enough for inward gravitational pressure to overwhelm it. High rotational speed and/or metallicity can prevent this. Stars with these characteristics still contract as their outward pressure drops, but unlike their slower or less metal-rich cousins, these stars continue to exert enough outward pressure to prevent gravitational collapse.

Stars formed by collision mergers having a metallicity Z between 0.02 and 0.001 may end their lives as pair-instability supernovae if their mass is in the appropriate range.[3]

Very large high-metallicity stars are probably unstable due to the Eddington limit, and would tend to shed mass during the formation process. 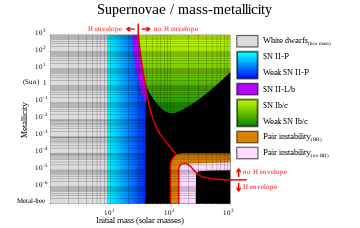 Supernovae vs initial mass and metallicity

Gamma rays produced by stars of fewer than 100 or so solar masses are not energetic enough to produce electron-positron pairs. Some of these stars will undergo supernovae of a different type at the end of their lives, but the causative mechanisms do not involve pair-instability.

These stars are large enough to produce gamma rays with enough energy to create electron-positron pairs, but the resulting net reduction in counter-gravitational pressure is insufficient to cause the core-overpressure required for supernova. Instead, the contraction caused by pair-creation provokes increased thermonuclear activity within the star that repulses the inward pressure and returns the star to equilibrium. It is thought that stars of this size undergo a series of these pulses until they shed sufficient mass to drop below 100 solar masses, at which point they are no longer hot enough to support pair-creation. Pulsing of this nature may have been responsible for the variations in brightness experienced by Eta Carinae in 1843, though this explanation is not universally accepted.

For very high-mass stars, with mass at least 130 and up to perhaps roughly 250 solar masses, a true pair-instability supernova can occur. In these stars, the first time that conditions support pair production instability, the situation runs out of control. The collapse proceeds to efficiently compress the star's core; the overpressure is sufficient to allow runaway nuclear fusion to burn it in several seconds, creating a thermonuclear explosion.[5] With more thermal energy released than the star's gravitational binding energy, it is completely disrupted; no black hole or other remnant is left behind. This is predicted to contribute to a "mass gap" in the mass distribution of stellar black holes.[6][7] (This "upper mass gap" is to be distinguished from a suspected "lower mass gap" in the range of a few solar masses.)

In addition to the immediate energy release, a large fraction of the star's core is transformed to nickel-56, a radioactive isotope which decays with a half-life of 6.1 days into cobalt-56. Cobalt-56 has a half-life of 77 days and then further decays to the stable isotope iron-56 (see Supernova nucleosynthesis). For the hypernova SN 2006gy, studies indicate that perhaps 40 solar masses of the original star were released as Ni-56, almost the entire mass of the star's core regions.[4] Collision between the exploding star core and gas it ejected earlier, and radioactive decay, release most of the visible light.

A different reaction mechanism, photodisintegration, follows the initial pair-instability collapse in stars of at least 250 solar masses. This endothermic (energy-absorbing) reaction absorbs the excess energy from the earlier stages before the runaway fusion can cause a hypernova explosion; the star then collapses completely into a black hole.[5]

Pair-instability supernovae are popularly thought to be highly luminous. This is only the case for the most massive progenitors since the luminosity depends strongly on the ejected mass of radioactive 56Ni. They can have peak luminosities of over 1037 W, brighter than type Ia supernovae, but at lower masses peak luminosities are less than 1035 W, comparable to or less than typical type II supernovae.[8]

In contrast to the spectra, the light curves are quite different from the common types of supernova. The light curves are highly extended, with peak luminosity occurring months after onset.[8] This is due to the extreme amounts of 56Ni expelled, and the optically dense ejecta, as the star is entirely disrupted. 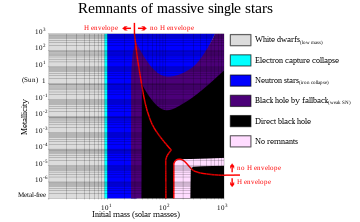 Pair-instability supernovae completely destroy the progenitor star and do not leave behind a neutron star or black hole. The entire mass of the star is ejected, so a nebular remnant is produced and many solar masses of heavy elements are ejected into interstellar space.

Some supernovae candidates for classification as pair-instability supernovae include: