A quark star is a hypothetical type of compact, exotic star, where extremely high core temperature and pressure has forced nuclear particles to form quark matter, a continuous state of matter consisting of free quarks.

Some massive stars collapse to form neutron stars at the end of their life cycle, as has been both observed and explained theoretically. Under the extreme temperatures and pressures inside neutron stars, the neutrons are normally kept apart by a degeneracy pressure, stabilizing the star and hindering further gravitational collapse. However, it is hypothesized that under even more extreme temperature and pressure, the degeneracy pressure of the neutrons is overcome, and the neutrons are forced to merge and dissolve into their constituent quarks, creating an ultra-dense phase of quark matter based on densely packed quarks. In this state, a new equilibrium is supposed to emerge, as a new degeneracy pressure between the quarks, as well as repulsive electromagnetic forces, will occur and hinder gravitational collapse.

If these ideas are correct, quark stars might occur, and be observable, somewhere in the universe. Theoretically, such a scenario is seen as scientifically plausible, but it has been impossible to prove both observationally and experimentally, because the very extreme conditions needed for stabilizing quark matter cannot be created in any laboratory nor observed directly in nature. The stability of quark matter, and hence the existence of quark stars, is for these reasons among the unsolved problems in physics.

If quark stars can form, then the most likely place to find quark star matter would be inside neutron stars that exceed the internal pressure needed for quark degeneracy – the point at which neutrons break down into a form of dense quark matter. They could also form if a massive star collapses at the end of its life, provided that it is possible for a star to be large enough to collapse beyond a neutron star but not large enough to form a black hole.

If they exist, quark stars would resemble and be easily mistaken for neutron stars: they would form in the death of a massive star in a Type II supernova, be extremely dense and small, and possess a very high gravitational field. They would also lack some features of neutron stars, unless they also contained a shell of neutron matter, because free quarks are not expected to have properties matching degenerate neutron matter. For example, they might be radio-silent, or have atypical sizes, electromagnetic fields, or surface temperatures, compared to neutron stars.

The analysis about quark stars was first proposed in 1965 by Soviet physicists D. D. Ivanenko and D. F. Kurdgelaidze.[1][2] Their existence has not been confirmed.

The equation of state of quark matter is uncertain, as is the transition point between neutron-degenerate matter and quark matter. Theoretical uncertainties have precluded making predictions from first principles. Experimentally, the behaviour of quark matter is being actively studied with particle colliders, but this can only produce very hot (above 1012 K) quark–gluon plasma blobs the size of atomic nuclei, which decay immediately after formation. The conditions inside compact stars with extremely high densities and temperatures well below 1012 K cannot be recreated artificially, as there are no known methods to produce, store or study "cold" quark matter directly as it would be found inside quark stars. The theory predicts quark matter to possess some peculiar characteristics under these conditions. 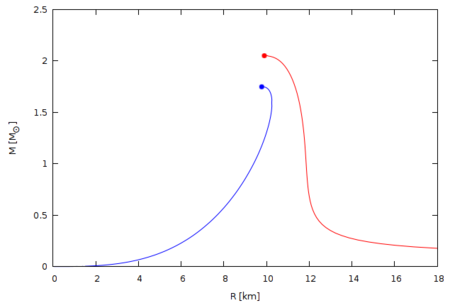 It is theorized that when the neutron-degenerate matter, which makes up neutron stars, is put under sufficient pressure from the star's own gravity or the initial supernova creating it, the individual neutrons break down into their constituent quarks (up quarks and down quarks), forming what is known as quark matter. This conversion might be confined to the neutron star's center or it might transform the entire star, depending on the physical circumstances. Such a star is known as a quark star.[4][5]

Quark stars made of strange quark matter are known as strange stars, and they form a subgroup under the quark star category.[8]

Theoretical investigations have revealed that quark stars might not only be produced from neutron stars and powerful supernovas, they could also be created in the early cosmic phase separations following the Big Bang.[6] If these primordial quark stars transform into strange quark matter before the external temperature and pressure conditions of the early Universe makes them unstable, they might turn out stable, if the Bodmer–Witten assumption holds true. Such primordial strange stars could survive to this day.[6]

Quark stars have some special characteristics that separate them from ordinary neutron stars.

Under the physical conditions found inside neutron stars, with extremely high densities but temperatures well below 1012 K, quark matter is predicted to exhibit some peculiar characteristics. It is expected to behave as a Fermi liquid and enter a so-called color-flavor-locked (CFL) phase of color superconductivity, where "color" refers to the six "charges" exhibited in the strong interaction, instead of the positive and the negative charges in electromagnetism. At slightly lower densities, corresponding to higher layers closer to the surface of the compact star, the quark matter will behave as a non-CFL quark liquid, a phase that is even more mysterious than CFL and might include color conductivity and/or several additional yet undiscovered phases. None of these extreme conditions can currently be recreated in laboratories so nothing can be inferred about these phases from direct experiments.[9]

If the conversion of neutron-degenerate matter to (strange) quark matter is total, a quark star can to some extent be imagined as a single gigantic hadron. But this "hadron" will be bound by gravity, rather than by the strong force that binds ordinary hadrons.

At least under the assumptions mentioned above, the probability of a given neutron star being a quark star is low, so in the Milky Way there would only be a small population of quark stars. If it is correct, however, that overdense neutron stars can turn into quark stars, that makes the possible number of quark stars higher than was originally thought, as observers would be looking for the wrong type of star.

Observations released by the Chandra X-ray Observatory on April 10, 2002 detected two possible quark stars, designated RX J1856.5-3754 and 3C 58, which had previously been thought to be neutron stars. Based on the known laws of physics, the former appeared much smaller and the latter much colder than it should be, suggesting that they are composed of material denser than neutron-degenerate matter. However, these observations are met with skepticism by researchers who say the results were not conclusive;[10] and since the late 2000s, the possibility that RX J1856 is a quark star has been excluded.

Another star, XTE J1739-285,[11] has been observed by a team led by Philip Kaaret of the University of Iowa and reported as a possible quark star candidate.

Apart from ordinary quark matter and strange quark matter, other types of quark-gluon plasma might theoretically occur or be formed inside neutron stars and quark stars. This includes the following, some of which has been observed and studied in laboratories: