Hermann Minkowski (/mɪŋˈkɔːfski, -ˈkɒf-/;[2] German: [mɪŋˈkɔfski]; 22 June 1864 – 12 January 1909) was a German mathematician and professor at Königsberg, Zürich and Göttingen. In different sources Minkowski's nationality is variously given as German,[3][4][5] Poland ,[6][7][8] or Lithuanian-German,[9] or Russian.[1] He created and developed the geometry of numbers and used geometrical methods to solve problems in number theory, mathematical physics, and the theory of relativity.

Minkowski is perhaps best known for his work in relativity, in which he showed in 1907 that his former student Albert Einstein's special theory of relativity (1905) could be understood geometrically as a theory of four-dimensional space–time, since known as the "Minkowski spacetime".

Hermann Minkowski was born in the town of Aleksota, the Suwałki Governorate, the Kingdom of Poland, part of the Russian Empire, to Lewin Boruch Minkowski, a merchant who subsidized the building of the choral synagogue in Kovno,[10][11][12] and Rachel Taubmann, both of Jewish descent.[13] Hermann was a younger brother of the medical researcher Oskar (born 1858).[14]

To escape persecution in the Russian Empire the family moved to Königsberg in 1872,[15] where the father became involved in rag export and later in manufacture of mechanical clockwork tin toys (he operated his firm Lewin Minkowski & Son with his eldest son Max).[16]

Minkowski died suddenly of appendicitis in Göttingen on 12 January 1909. David Hilbert's obituary of Minkowski illustrates the deep friendship between the two mathematicians (translated):

Since my student years Minkowski was my best, most dependable friend who supported me with all the depth and loyalty that was so characteristic of him. Our science, which we loved above all else, brought us together; it seemed to us a garden full of flowers. In it, we enjoyed looking for hidden pathways and discovered many a new perspective that appealed to our sense of beauty, and when one of us showed it to the other and we marveled over it together, our joy was complete. He was for me a rare gift from heaven and I must be grateful to have possessed that gift for so long. Now death has suddenly torn him from our midst. However, what death cannot take away is his noble image in our hearts and the knowledge that his spirit continues to be active in us.

Max Born delivered the obituary on behalf of the mathematics students at Göttingen.[17]

The main-belt asteroid 12493 Minkowski and M-matrices are named in Minkowski's honor.[18] 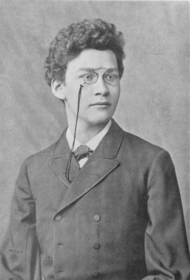 Minkowski in 1883, at the time of being awarded the Mathematics Prize of the French Academy of Sciences

Minkowski was educated in East Prussia at the Albertina University of Königsberg, where he earned his doctorate in 1885 under the direction of Ferdinand von Lindemann. In 1883, while still a student at Königsberg, he was awarded the Mathematics Prize of the French Academy of Sciences for his manuscript on the theory of quadratic forms. Due to the very young age of 18, which was unheard of in the mathematics community, and his obscurity as a mathematician at the time, his sharing the award with eminent English mathematician Henry Smith (who was certainly a great deal more famous than Hermann and to whom the prize was awarded posthumously) caused severe unrest among English mathematicians. The prize committee, despite the numerous complaints, never changed their decision. He also became a friend of another renowned mathematician, David Hilbert. His brother, Oskar Minkowski (1858–1931), was a well-known physician and researcher.[15]

Minkowski taught at the universities of Bonn, Königsberg, Zürich, and Göttingen. At the Eidgenössische Polytechnikum, today the ETH Zurich, he was one of Einstein's teachers.

Minkowski explored the arithmetic of quadratic forms, especially concerning n variables, and his research into that topic led him to consider certain geometric properties in a space of n dimensions. In 1896, he presented his geometry of numbers, a geometrical method that solved problems in number theory. He is also the creator of the Minkowski Sausage and the Minkowski cover of a curve.[19]

In 1902, he joined the Mathematics Department of Göttingen and became a close colleague of David Hilbert, whom he first met at university in Königsberg. Constantin Carathéodory was one of his students there.

By 1908 Minkowski realized that the special theory of relativity, introduced by his former student Albert Einstein in 1905 and based on the previous work of Lorentz and Poincaré, could best be understood in a four-dimensional space, since known as the "Minkowski spacetime", in which time and space are not separated entities but intermingled in a four-dimensional space–time, and in which the Lorentz geometry of special relativity can be effectively represented using the invariant interval [math]\displaystyle{ x^2 + y^2 + z^2 - c^2 t^2 }[/math] (see History of special relativity).

The mathematical basis of Minkowski space can also be found in the hyperboloid model of hyperbolic space already known in the 19th century, because isometries (or motions) in hyperbolic space can be related to Lorentz transformations, which included contributions of Wilhelm Killing (1880, 1885), Henri Poincaré (1881), Homersham Cox (1881), Alexander Macfarlane (1894) and others (see History of Lorentz transformations).

The beginning part of his address called "Space and Time" delivered at the 80th Assembly of German Natural Scientists and Physicians (21 September 1908) is now famous:

The views of space and time which I wish to lay before you have sprung from the soil of experimental physics, and therein lies their strength. They are radical. Henceforth space by itself, and time by itself, are doomed to fade away into mere shadows, and only a kind of union of the two will preserve an independent reality.