Rolf Maximilian Sievert (Swedish: [ˈrɔlf maksɪˈmǐːlɪan ˈsǐːvɛʈ]; 6 May 1896 – 3 October 1966) was a Swedish medical physicist whose major contribution was in the study of the biological effects of ionizing radiation.

He served as head of the physics laboratory at Sweden's Radiumhemmet from 1924 to 1937, after which he was appointed head of the department of radiation physics at the Karolinska Institute. He played a pioneering role in the measurement of doses of radiation especially in its use in the diagnosis and treatment of cancer. In later years, he focused his research on the biological effects of repeated exposure to low doses of radiation.

He was a founder of the International X-ray and Radium Protection Committee (IXRPC) in 1928, and served as it first chairman; this later became the ICRP. He also chaired the United Nations Scientific Committee on the Effects of Atomic Radiation (UNSCEAR).[2]

He invented a number of instruments for measuring radiation doses, the most widely known being the Sievert chamber.

In 1979, at the Conférence Générale des Poids et Mesures (General Conference on Weights and Measures or CGPM), the SI unit for ionizing radiation dose equivalent was named after him and given the name sievert (Sv).

He had an extensive insect collection and his specimens can be found in Entomological Museum of Lund University. 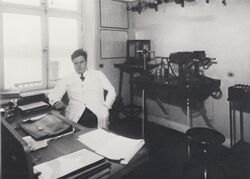