The newton (symbol: N) is the International System of Units (SI) derived unit of force. It is defined as 1 kg⋅m/s2, the force which gives a mass of 1 kilogram an acceleration of 1 metre per second per second. It is named after Isaac Newton in recognition of his work on classical mechanics, specifically Newton's second law of motion.

In 1946, Conférence Générale des Poids et Mesures (CGPM) Resolution 2 standardized the unit of force in the MKS system of units to be the amount needed to accelerate 1 kilogram of mass at the rate of 1 metre per second squared. In 1948, the 9th CGPM Resolution 7 adopted the name newton for this force.[3] The MKS system then became the blueprint for today's SI system of units. The newton thus became the standard unit of force in the Système international d'unités (SI), or International System of Units.

The newton is named after Isaac Newton. As with every SI unit named for a person, its symbol starts with an upper case letter (N), but when written in full it follows the rules for capitalisation of a common noun; i.e., "newton" becomes capitalised at the beginning of a sentence and in titles, but is otherwise in lower case.

In more formal terms, Newton's second law of motion states that the force exerted on an object is directly proportional to the acceleration hence acquired by that object, namely:[4]

At average gravity on Earth (conventionally, g = 9.80665 m/s2), a kilogram mass exerts a force of about 9.8 newtons. An average-sized apple exerts about one newton of force at Earth's surface, which we measure as the apple's weight on Earth.[5]

The weight of an average adult exerts a force of about 608 N. 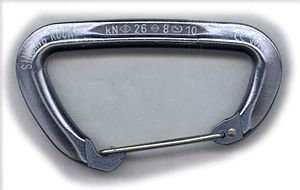 It is common to see forces expressed in kilonewtons (kN), where 1 kN = 1000 N. For example, the tractive effort of a Class Y steam train locomotive and the thrust of an F100 jet engine are both around 130 kN.