Charles-Augustin de Coulomb (/ˈkuːlɒm, -loʊm, kuːˈlɒm, -ˈloʊm/;[1] French: [kulɔ̃]; 14 June 1736 – 23 August 1806) was a French officer, engineer, and physicist. He is best known as the eponymous discoverer of what is now called Coulomb's law, the description of the electrostatic force of attraction and repulsion. He also did important work on friction.

Charles-Augustin de Coulomb was born in Angoulême, Angoumois county, France, to Henry Coulomb, an inspector of the royal demesne originally from Montpellier, and Catherine Bajet. He was baptised at the parish church of St. André. The family moved to Paris early in his childhood, and he studied at Collège Mazarin. His studies included philosophy, language and literature. He also received a good education in mathematics, astronomy, chemistry and botany. When his father suffered a financial setback, he was forced to leave Paris, and went to Montpellier. Coulomb submitted his first publication to the Society of Sciences in Montpellier during this time. He went back to Paris and passed the exams for the École royale du génie de Mézières in 1760.

He graduated in 1761 and joined the French army as an engineer with the rank of lieutenant. Over the next twenty years, he was posted to a variety of locations where he was involved in engineering: structural, fortifications, soil mechanics, as well as other fields of engineering. His first posting was to Brest but in February 1764 he was sent to Martinique, in the West Indies, where he was put in charge of building the new Fort Bourbon and this task occupied him until June 1772. His health suffered setbacks during the three years he spent in Martinique that would affect him for the rest of his life.

On his return to France, Coulomb was sent to Bouchain. However, he now began to write important works on applied mechanics and he presented his first work to the Académie des Sciences in Paris in 1773. In 1779 Coulomb was sent to Rochefort to collaborate with the Marquis de Montalembert in constructing a fort made entirely from wood near Île-d'Aix. During his period at Rochefort, Coulomb carried on his research into mechanics, in particular using the shipyards in Rochefort as laboratories for his experiments. Also in 1779 he published an important investigation of the laws of friction (Théorie des machines simples, en ayant regard au frottement de leurs parties et à la roideur des cordages), which was followed twenty years later by a memoir on fluid resistance.[3]

Upon his return to France, with the rank of captain, he was employed at La Rochelle, the Isle of Aix and Cherbourg. He discovered first an inverse relationship of the force between electric charges and the square of its distance and then the same relationship between magnetic poles. Later these relationships were named after him as Coulomb's law.

In 1781, he was stationed at Paris. In 1787 with Tenon he visited the Royal Naval Hospital, Stonehouse and they were impressed by the revolutionary "pavilion" design and recommended it to the French government. On the outbreak of the French Revolution in 1789, he resigned his appointment as intendant des eaux et fontaines and retired to a small estate which he possessed at Blois.[3]

He was recalled to Paris for a time in order to take part in the new determination of weights and measures, which had been decreed by the Revolutionary government. He became one of the first members of the French National Institute and was appointed inspector of public instruction in 1802. His health was already very feeble and four years later he died in Paris.[3]

Coulomb leaves a legacy as a pioneer in the field of geotechnical engineering for his contribution to retaining wall design. His name is one of the 72 names inscribed on the Eiffel Tower.

In 1784, his memoir Recherches théoriques et expérimentales sur la force de torsion et sur l'élasticité des fils de metal[4] (Theoretical research and experimentation on torsion and the elasticity of metal wire) appeared. This memoir contained the results of Coulomb's experiments on the torsional force for metal wires, specifically within a torsion balance. His general result is:

the moment of the torque is, for wires of the same metal, proportional to the torsional angle, the fourth power of the diameter and the inverse of the length of the wire. 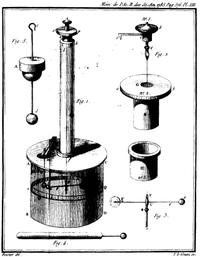 In 1785, Coulomb presented his first three reports on electricity and magnetism:

Four subsequent reports were published in the following years:

Coulomb also made a significant contribution to the field of tribology. He completed the most comprehensive study of friction undertaken in the eighteenth century and was named as one of the 23 "Men of Tribology" by Duncan Dowson.[12] 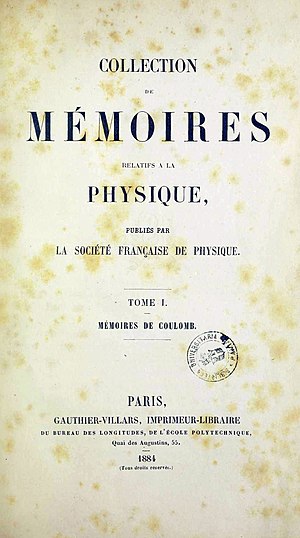