Properties of the bounds

Unlike approaches that make asymptotic assumptions, including bootstrap approaches and those that rely on the central limit theorem, CDF-based bounds are valid for finite sample sizes. And unlike bounds based on inequalities such as Hoeffding's and McDiarmid's inequalities, CDF-based bounds use properties of the entire sample and thus often produce significantly tighter bounds.

When producing bounds on the CDF, we must differentiate between pointwise and simultaneous bands.

Illustration of different CDF bounds. This shows CDF bounds generated from a random sample of 30 points. The purple line is the simultaneous DKW bounds which encompass the entire CDF at 95% confidence level. The orange lines show the pointwise Clopper-Pearson bounds, which only guarantee individual points at the 95% confidence level and thus provide a tighter bound

A pointwise CDF bound is one which only guarantees their Coverage probability of [math]\displaystyle{ 1-\alpha }[/math] percent on any individual point of the empirical CDF. Because of the relaxed guarantees, these intervals can be much smaller.

CDF-based confidence intervals require a probabilistic bound on the CDF of the distribution from which the sample were generated. A variety of methods exist for generating confidence intervals for the CDF of a distribution, [math]\displaystyle{ F }[/math], given an i.i.d. sample drawn from the distribution. These methods are all based on the empirical distribution function (empirical CDF). Given an i.i.d. sample of size n, [math]\displaystyle{ x_1,\ldots,x_n\sim F }[/math], the empirical CDF is defined to be

where [math]\displaystyle{ 1\{A\} }[/math] is the indicator of event A. The Dvoretzky–Kiefer–Wolfowitz inequality,[1] whose tight constant was determined by Massart,[2] places a confidence interval around the Kolmogorov–Smirnov statistic between the CDF and the empirical CDF. Given an i.i.d. sample of size n from [math]\displaystyle{ F }[/math], the bound states

This can be viewed as a confidence envelope that runs parallel to, and is equally above and below, the empirical CDF. 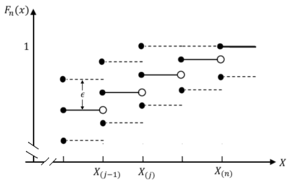 A nonparametric bound on the mean

the confidence interval for the mean can be computed as

A nonparametric bound on the variance

Bounds on other statistical functionals