Short description: Method for determining the concentration of a substance in an unknown sample 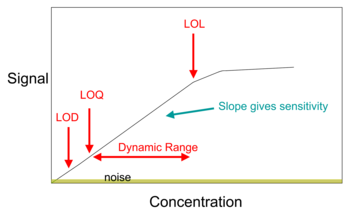 In more general use, a calibration curve is a curve or table for a measuring instrument which measures some parameter indirectly, giving values for the desired quantity as a function of values of sensor output. For example, a calibration curve can be made for a particular pressure transducer to determine applied pressure from transducer output (a voltage).[2] Such a curve is typically used when an instrument uses a sensor whose calibration varies from one sample to another, or changes with time or use; if sensor output is consistent the instrument would be marked directly in terms of the measured unit.

The data - the concentrations of the analyte and the instrument response for each standard - can be fit to a straight line, using linear regression analysis. This yields a model described by the equation y = mx + y0, where y is the instrument response, m represents the sensitivity, and y0 is a constant that describes the background. The analyte concentration (x) of unknown samples may be calculated from this equation.

Many different variables can be used as the analytical signal. For instance, chromium (III) might be measured using a chemiluminescence method, in an instrument that contains a photomultiplier tube (PMT) as the detector. The detector converts the light produced by the sample into a voltage, which increases with intensity of light.The amount of light measured is the analytical signal.

Second, the calibration curve provides data on an empirical relationship. The mechanism for the instrument's response to the analyte may be predicted or understood according to some theoretical model, but most such models have limited value for real samples. (Instrumental response is usually highly dependent on the condition of the analyte, solvents used and impurities it may contain; it could also be affected by external factors such as pressure and temperature.)

The chief disadvantages are (1) that the standards require a supply of the analyte material, preferably of high purity and in known concentration, and (2) that the standards and the unknown are in the same matrix. Some analytes - e.g., particular proteins - are extremely difficult to obtain pure in sufficient quantity. Other analytes are often in complex matrices, e.g., heavy metals in pond water. In this case, the matrix may interfere with or attenuate the signal of the analyte. Therefore, a comparison between the standards (which contain no interfering compounds) and the unknown is not possible. The method of standard addition is a way to handle such a situation.

As expected, the concentration of the unknown will have some error which can be calculated from the formula below.[5][6][7] This formula assumes that a linear relationship is observed for all the standards. It is important to note that the error in the concentration will be minimal if the signal from the unknown lies in the middle of the signals of all the standards (the term [math]\displaystyle{ y_{unk}-\bar{y} }[/math] goes to zero if [math]\displaystyle{ y_{unk}=\bar{y} }[/math])