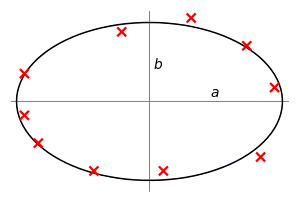 The method of least squares is a standard approach in regression analysis to approximate the solution of overdetermined systems (sets of equations in which there are more equations than unknowns) by minimizing the sum of the squares of the residuals (a residual being: the difference between an observed value, and the fitted value provided by a model) made in the results of each individual equation.

The most important application is in data fitting. The best fit in the least-squares sense minimizes the sum of squared residuals. When the problem has substantial uncertainties in the independent variable (the x variable), then simple regression and least-squares methods have problems; in such cases, the methodology required for fitting errors-in-variables models may be considered instead of that for least squares.

Least-squares problems fall into two categories: linear or ordinary least squares and nonlinear least squares, depending on whether or not the residuals are linear in all unknowns. The linear least-squares problem occurs in statistical regression analysis; it has a closed-form solution. The nonlinear problem is usually solved by iterative refinement; at each iteration the system is approximated by a linear one, and thus the core calculation is similar in both cases.

When the observations come from an exponential family with identity as its natural sufficient statistics and mild-conditions are satisfied (e.g. for normal, exponential, Poisson and binomial distributions), standardized least-squares estimates and maximum-likelihood estimates are identical.[1] The method of least squares can also be derived as a method of moments estimator.

The following discussion is mostly presented in terms of linear functions but the use of least squares is valid and practical for more general families of functions. Also, by iteratively applying local quadratic approximation to the likelihood (through the Fisher information), the least-squares method may be used to fit a generalized linear model.

The least-squares method was officially discovered and published by Adrien-Marie Legendre (1805),[2] though it is usually also co-credited to Carl Friedrich Gauss (1795)[3][4] who contributed significant theoretical advances to the method and may have previously used it in his work.[5][6]

The method of least squares grew out of the fields of astronomy and geodesy, as scientists and mathematicians sought to provide solutions to the challenges of navigating the Earth's oceans during the Age of Exploration. The accurate description of the behavior of celestial bodies was the key to enabling ships to sail in open seas, where sailors could no longer rely on land sightings for navigation.

The method was the culmination of several advances that took place during the course of the eighteenth century:[7]

The first clear and concise exposition of the method of least squares was published by Legendre in 1805.[8] The technique is described as an algebraic procedure for fitting linear equations to data and Legendre demonstrates the new method by analyzing the same data as Laplace for the shape of the earth. Within ten years after Legendre's publication, the method of least squares had been adopted as a standard tool in astronomy and geodesy in France, Italy, and Prussia, which constitutes an extraordinarily rapid acceptance of a scientific technique.[7]

In 1809 Carl Friedrich Gauss published his method of calculating the orbits of celestial bodies. In that work he claimed to have been in possession of the method of least squares since 1795. This naturally led to a priority dispute with Legendre. However, to Gauss's credit, he went beyond Legendre and succeeded in connecting the method of least squares with the principles of probability and to the normal distribution. He had managed to complete Laplace's program of specifying a mathematical form of the probability density for the observations, depending on a finite number of unknown parameters, and define a method of estimation that minimizes the error of estimation. Gauss showed that the arithmetic mean is indeed the best estimate of the location parameter by changing both the probability density and the method of estimation. He then turned the problem around by asking what form the density should have and what method of estimation should be used to get the arithmetic mean as estimate of the location parameter. In this attempt, he invented the normal distribution.

An early demonstration of the strength of Gauss's method came when it was used to predict the future location of the newly discovered asteroid Ceres. On 1 January 1801, the Italian astronomer Giuseppe Piazzi discovered Ceres and was able to track its path for 40 days before it was lost in the glare of the sun. Based on these data, astronomers desired to determine the location of Ceres after it emerged from behind the sun without solving Kepler's complicated nonlinear equations of planetary motion. The only predictions that successfully allowed Hungarian astronomer Franz Xaver von Zach to relocate Ceres were those performed by the 24-year-old Gauss using least-squares analysis.

In 1810, after reading Gauss's work, Laplace, after proving the central limit theorem, used it to give a large sample justification for the method of least squares and the normal distribution. In 1822, Gauss was able to state that the least-squares approach to regression analysis is optimal in the sense that in a linear model where the errors have a mean of zero, are uncorrelated, and have equal variances, the best linear unbiased estimator of the coefficients is the least-squares estimator. This result is known as the Gauss–Markov theorem.

The idea of least-squares analysis was also independently formulated by the American Robert Adrain in 1808. In the next two centuries workers in the theory of errors and in statistics found many different ways of implementing least squares.[9] 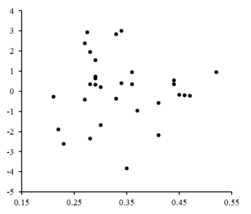 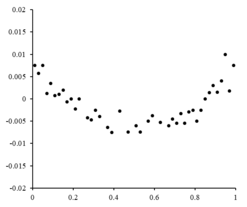 If the residual points had some sort of a shape and were not randomly fluctuating, a linear model would not be appropriate. For example, if the residual plot had a parabolic shape as seen to the right, a parabolic model[math]\displaystyle{ (Y_i = \alpha + \beta x_i + \gamma x_i^2 + U_i) }[/math] would be appropriate for the data. The residuals for a parabolic model can be calculated via [math]\displaystyle{ r_i=y_i-\hat{\alpha}-\hat{\beta} x_i-\widehat{\gamma} x_i^2 }[/math].[10]

This regression formulation considers only observational errors in the dependent variable (but the alternative total least squares regression can account for errors in both variables). There are two rather different contexts with different implications:

The gradient equations apply to all least squares problems. Each particular problem requires particular expressions for the model and its partial derivatives.[12]

These are the defining equations of the Gauss–Newton algorithm.

These differences must be considered whenever the solution to a nonlinear least squares problem is being sought.[12]

Consider a simple example drawn from physics. A spring should obey Hooke's law which states that the extension of a spring y is proportional to the force, F, applied to it.

constitutes the model, where F is the independent variable. In order to estimate the force constant, k, we conduct a series of n measurements with different forces to produce a set of data, [math]\displaystyle{ (F_i, y_i),\ i=1,\dots,n\! }[/math], where yi is a measured spring extension.[14] Each experimental observation will contain some error, [math]\displaystyle{ \varepsilon }[/math], and so we may specify an empirical model for our observations,

There are many methods we might use to estimate the unknown parameter k. Since the n equations in the m variables in our data comprise an overdetermined system with one unknown and n equations, we estimate k using least squares. The sum of squares to be minimized is

The least squares estimate of the force constant, k, is given by

We assume that applying force causes the spring to expand. After having derived the force constant by least squares fitting, we predict the extension from Hooke's law.

In a least squares calculation with unit weights, or in linear regression, the variance on the jth parameter, denoted [math]\displaystyle{ \operatorname{var}(\hat{\beta}_j) }[/math], is usually estimated with

where the true error variance σ2 is replaced by an estimate, the reduced chi-squared statistic, based on the minimized value of the residual sum of squares (objective function), S. The denominator, n − m, is the statistical degrees of freedom; see effective degrees of freedom for generalizations.[12] C is the covariance matrix.

It is necessary to make assumptions about the nature of the experimental errors to test the results statistically. A common assumption is that the errors belong to a normal distribution. The central limit theorem supports the idea that this is a good approximation in many cases.

However, suppose the errors are not normally distributed. In that case, a central limit theorem often nonetheless implies that the parameter estimates will be approximately normally distributed so long as the sample is reasonably large. For this reason, given the important property that the error mean is independent of the independent variables, the distribution of the error term is not an important issue in regression analysis. Specifically, it is not typically important whether the error term follows a normal distribution. 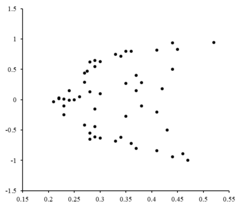 "Fanning Out" Effect of Heteroscedasticity

The first principal component about the mean of a set of points can be represented by that line which most closely approaches the data points (as measured by squared distance of closest approach, i.e. perpendicular to the line). In contrast, linear least squares tries to minimize the distance in the [math]\displaystyle{ y }[/math] direction only. Thus, although the two use a similar error metric, linear least squares is a method that treats one dimension of the data preferentially, while PCA treats all dimensions equally.

Notable statistician Sara van de Geer used Empirical process theory and the Vapnik-Chervonenkis dimension to prove a least-squares estimator can be interpreted as a measure on the space of square-integrable functions.[15]

In some contexts a regularized version of the least squares solution may be preferable. Tikhonov regularization (or ridge regression) adds a constraint that [math]\displaystyle{ \|\beta\|^2 }[/math], the L2-norm of the parameter vector, is not greater than a given value. Equivalently, it may solve an unconstrained minimization of the least-squares penalty with [math]\displaystyle{ \alpha\|\beta\|^2 }[/math] added, where [math]\displaystyle{ \alpha }[/math] is a constant (this is the Lagrangian form of the constrained problem). In a Bayesian context, this is equivalent to placing a zero-mean normally distributed prior on the parameter vector.

An alternative regularized version of least squares is Lasso (least absolute shrinkage and selection operator), which uses the constraint that [math]\displaystyle{ \|\beta\| }[/math], the L1-norm of the parameter vector, is no greater than a given value.[16][17][18] (As above, this is equivalent to an unconstrained minimization of the least-squares penalty with [math]\displaystyle{ \alpha\|\beta\| }[/math] added.) In a Bayesian context, this is equivalent to placing a zero-mean Laplace prior distribution on the parameter vector.[19] The optimization problem may be solved using quadratic programming or more general convex optimization methods, as well as by specific algorithms such as the least angle regression algorithm.

One of the prime differences between Lasso and ridge regression is that in ridge regression, as the penalty is increased, all parameters are reduced while still remaining non-zero, while in Lasso, increasing the penalty will cause more and more of the parameters to be driven to zero. This is an advantage of Lasso over ridge regression, as driving parameters to zero deselects the features from the regression. Thus, Lasso automatically selects more relevant features and discards the others, whereas Ridge regression never fully discards any features. Some feature selection techniques are developed based on the LASSO including Bolasso which bootstraps samples,[20] and FeaLect which analyzes the regression coefficients corresponding to different values of [math]\displaystyle{ \alpha }[/math] to score all the features.[21]

The L1-regularized formulation is useful in some contexts due to its tendency to prefer solutions where more parameters are zero, which gives solutions that depend on fewer variables.[16] For this reason, the Lasso and its variants are fundamental to the field of compressed sensing. An extension of this approach is elastic net regularization.