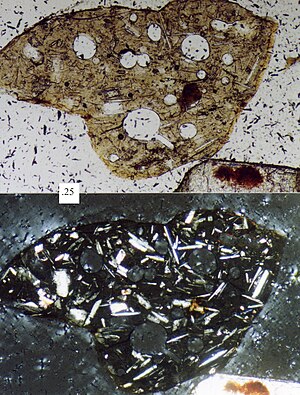 In volcanic rocks, fine-grained plagioclase can display a 'microlitic' texture of many small crystals.

Plagioclase is a series of tectosilicate (framework silicate) minerals within the feldspar group. Rather than referring to a particular mineral with a specific chemical composition, plagioclase is a continuous solid solution series, more properly known as the plagioclase feldspar series. This was first shown by the German mineralogist Johann Friedrich Christian Hessel (1796–1872) in 1826. The series ranges from albite to anorthite endmembers (with respective compositions NaAlSi3O8 to CaAl2Si2O8), where sodium and calcium atoms can substitute for each other in the mineral's crystal lattice structure. Plagioclase in hand samples is often identified by its polysynthetic crystal twinning or 'record-groove' effect.

The composition of a plagioclase feldspar is typically denoted by its overall fraction of anorthite (%An) or albite (%Ab), and readily determined by measuring the plagioclase crystal's refractive index in crushed grain mounts, or its extinction angle in thin section under a polarizing microscope. The extinction angle is an optical characteristic and varies with the albite fraction (%Ab). There are several named plagioclase feldspars that fall between albite and anorthite in the series. The following table shows their compositions in terms of constituent anorthite and albite percentages.

The intermediate members of the plagioclase group are very similar to each other and normally cannot be distinguished except by their optical properties. The specific gravity in each member (albite 2.62) increases 0.02 per 10% increase in anorthite (2.75).