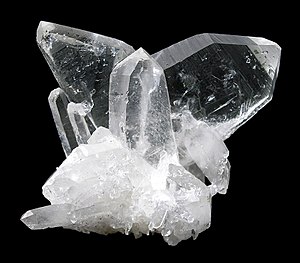 Diagram of twinned crystals of albite. On the more perfect cleavage, which is parallel to the basal plane (P), is a system of fine striations, parallel to the second cleavage (M).

Crystal twinning occurs when two or more adjacent crystals of the same mineral are oriented so that they share some of the same crystal lattice points in a symmetrical manner. The result is an intergrowth of two separate crystals that are tightly bonded to each other. The surface along which the lattice points are shared in twinned crystals is called a composition surface or twin plane.

Crystallographers classify twinned crystals by a number of twin laws. These twin laws are specific to the crystal structure. The type of twinning can be a diagnostic tool in mineral identification.

Deformation twinning, in which twinning develops in a crystal in response to a shear stress, is an important mechanism for permanent shape changes in a crystal.[1]

Twinning is a form of symmetrical intergrowth between two or more adjacent crystals of the same mineral. It differs from the ordinary random intergrowth of mineral grains in a mineral deposit, because the relative orientations of the two crystal segments show a fixed relationship that is characteristic of the mineral structure. The relationship is defined by a symmetry operation called a twin operation.[2][3]

On the microscopic level, the twin boundary is characterized by a set of atomic positions in the crystal lattice that are shared between the two orientations. [2][3] These shared lattice points give the junction between the crystal segments much greater strength than that that between randomly oriented grains, so that the twinned crystals do not easily break apart.[4]

Twin laws are symmetry operations that define the orientation between twin crystal segments. These are as characteristic of the mineral as are its crystal face angles. For example, crystals of staurolite show twinning at angles of almost precisely 90 degrees or 30 degrees.[4] A twin law is not a symmetry operation of the full set of basis points.[3]

In the isometric system, the most common types of twins are the Spinel Law (twin plane, parallel to an octahedron) <111>, where the twin axis is perpendicular to an octahedral face, and the Iron Cross <001>, which is the interpenetration of two pyritohedrons, a subtype of dodecahedron.[6]

In the tetragonal system, cyclical contact twins are the most commonly observed type of twin, such as in rutile titanium dioxide and cassiterite tin oxide.[6]

In the orthorhombic system, crystals usually twin on planes parallel to the prism face, where the most common is a {110} twin, which produces cyclical twins, such as in aragonite, chrysoberyl, and cerussite.[6]

In the triclinic system, the most commonly twinned crystals are the feldspar minerals plagioclase and microcline. These minerals show the Albite and Pericline Laws.[5][6]

The most common twin operations by crystal system are tabulated below. This list is not exhaustive, particularly for the crystal systems of lowest symmetry, such as the triclinic system.[7][2][6]

Simple twinned crystals may be contact twins or penetration twins. Contact twins meet on a single composition plane, often appearing as mirror images across the boundary. Plagioclase, quartz, gypsum, and spinel often exhibit contact twinning.[4] Merohedral twinning occurs when the lattices of the contact twins superimpose in three dimensions, such as by relative rotation of one twin from the other.[8] An example is metazeunerite.[9] Contact twinning characteristically creates reentrant faces where faces of the crystal segments meet on the contact plane at an angle greater than 180°.[4]

In penetration twins the individual crystals have the appearance of passing through each other in a symmetrical manner.[4] Orthoclase, staurolite, pyrite, and fluorite often show penetration twinning. The composition surface in penetration twins is usually irregular and extends to the center of the crystal.[3]

Contact twinning can arise from either reflection or rotation, whereas penetration twinning is usually produced by rotation.[3]

For rotational twinning the relationship between the twin axis and twin plane falls into one of three types:[10] 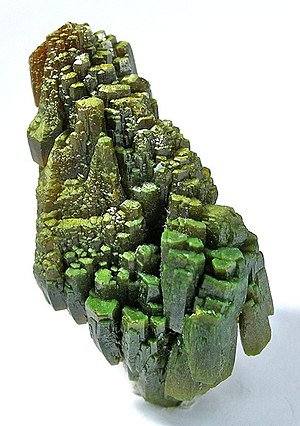 Parallel growth describes a form of crystal growth that produces the appearance of a cluster of aligned crystals. Close examination reveals that the cluster is actually a single crystal. This is not twinning, since the crystal lattice is continuous throughout the cluster. Parallel growth likely takes place because it reduces system energy.[12]

Growth twinning likely begins early in crystal growth, since the contact surface usually passes through the center of the crystal. An atom joins a crystal face in a less than ideal position, forming a seed for growth of a twin. The original crystal and its twin then grow together and closely resemble each other. This is characteristic enough of certain minerals to suggest that it is thermodynamically or kinetically favored under conditions of rapid growth.[4][2]

Illustration of transformation twinning in 2-D. The orthorhombic crystal at left transforms to a monoclinic crystal at right, with two parallel twinning planes (polysynthetic twinning)

Transformation twinning takes place when a cooling crystal experiences a displacive polymorphic transition. For example, leucite has an isometric crystal structure above about 665 °C (1,229 °F), but becomes tetragonal below this temperature. Any one of the three original axes of a crystal can become the long axis when this phase change takes place. Twinning results when different parts of the crystal break their isometric symmetry along a different choice of axis. This is typically polysynthetic twinning, which enables the crystal to maintain its isometric shape by averaging out the displacement in each direction. This produces a pseudomorphic crystal that appears to have isometric symmetry. Potassium feldspar likewise experiences polysynthetic twinning as it transforms from a monoclinic structure (orthoclase) to a to triclinic structure (microcline) on slow cooling.[2]

Animation of deformation twinning of crystal

Deformation twinning is a response to shear stress. The crystal structure is displaced along successive planes of the crystal, a process also called glide. The twinning is always reflection twinning and the glide plane is also the mirror plane. Deformation twinning can be observed in a calcite cleavage fragment by applying gentle pressure with a knife blade near an edge. This particular glide twinning, {102}, is found almost universally in deformed rock beds containing calcite.[2]

Twinning and slip are competitive mechanisms for crystal deformation. Each mechanism is dominant in certain crystal systems and under certain conditions.[13] In fcc metals, slip is almost always dominant because the stress required is far less than twinning stress.[14]

Twinning can occur by cooperative displacement of atoms along the face of the twin boundary. This displacement of a large quantity of atoms simultaneously requires significant energy to perform. Therefore, the theoretical stress required to form a twin is quite high. It is believed that twinning is associated with dislocation motion on a coordinated scale, in contrast to slip, which is caused by independent glide at several locations in the crystal.

Compared to slip, twinning produces a deformation pattern that is more heterogeneous in nature. This deformation produces a local gradient across the material and near intersections between twins and grain boundaries. The deformation gradient can lead to fracture along the boundaries, particularly in bcc transition metals at low temperatures.

Of the three common crystalline structures bcc, fcc, and hcp, the hcp structure is the most likely to form deformation twins when strained, because they rarely have a sufficient number of slip systems for an arbitrary shape change. High strain rates, low stacking-fault energy and low temperatures facilitate deformation twinning.[1]

If a metal with face-centered cubic (fcc) structure, like Al, Cu, Ag, Au, etc., is subjected to stress, it will experience twinning. The formation and migration of twin boundaries is partly responsible for ductility and malleability of fcc metals.[15]

Twin boundaries are partly responsible for shock hardening and for many of the changes that occur in cold work of metals with limited slip systems or at very low temperatures. They also occur due to martensitic transformations: the motion of twin boundaries is responsible for the pseudoelastic and shape-memory behavior of nitinol, and their presence is partly responsible for the hardness due to quenching of steel. In certain types of high strength steels, very fine deformation twins act as primary obstacles against dislocation motion. These steels are referred to as 'TWIP' steels, where TWIP stands for twinning-induced plasticity.[16]