The Mazda BT-50 is a compact/mid-size pickup truck produced by the Japanese manufacturer Mazda since 2006. It is a larger version of the predecessor B-Series pickup and is not sold in the Japanese and North American markets. The second-generation Ranger has been designed by Ford Australia, with a Mazda derivative sold as the BT-50. The third-generation BT-50 was revealed in 2020, now based on the Isuzu D-Max. 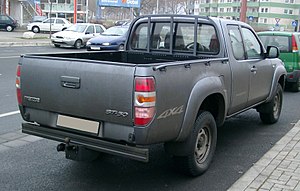 The BT-50 was launched at the Bangkok Motor Show on 22 March 2006. It shares its Duratorq/MZR-CD 2.5- and 3.0-liter diesel inline-four engines with the Ranger. In late November 2006, the new five-speed automatic transmission with Borg Warner transfer case has been added, as well as side airbags.

The BT-50 received a minor redesign in the first quarter of 2008, with a revised interior and several optional items made standard.

The model sold in Mexico and Central and South America includes these options:

The Mazda BT-50 is neither sold nor built in Japan.

A full model change of the Mazda BT-50 was revealed in October 2010 at the Australian International Motor Show.[6][7] It is based on the Ford Ranger (T6).

While the BT-50 version was designed by a Mazda team based at Ford Australia's design center in Melbourne, both Ford and Mazda worked independently. Of the exterior panels, only the windscreen, roof, and rear screen are common between the Ranger and BT-50, although the underpinnings are largely the same.[8]

A revised BT-50 for the 2016 model year debuted in July 2015 and launched into the Australian market in September 2015. The UR series facelift is mainly cosmetic without any changes in engine specifications, however, several equipment changes and slight price differences over the pre-facelift model are present.[9] Another facelift for the second generation BT-50 was launched for the Australian market in 2018. Changes includes revised looks and Apple CarPlay and Android Auto support through an Alpine sound head unit.[10]

The third generation BT-50 was unveiled in Australia on 17 June 2020.[14] Unlike its predecessors, the BT-50 was developed from the third generation Isuzu D-Max. The pickup is a result of a tie-up between Mazda and Isuzu which was announced on 11 July 2016, with Isuzu agreeing to supply pickup trucks to Mazda.[15] An Isuzu executive told Australian media CarsGuide that Mazda had no involvement in the development of the D-Max, and that Mazda will be handed a finished pick-up truck instead.[16] As the result, the TF BT-50 is built at Isuzu Motors plant in Samrong, Samut Prakan, Thailand.

The vehicle features the Mazda's Kodo design language similar to its crossover line-up. While it still shares the base structure, body shell and the wing mirrors with the Isuzu D-Max, Mazda made most of the body panels unique. It is powered by the Isuzu-sourced 3.0-litre 4JJ3-TCX inline-four turbo-diesel engine, replacing the 3.2-litre MZ-CD inline-five Ford Duratorq turbodiesel engine.[17]

For the first time, the third generation BT-50 is available with adaptive cruise control which is aided by twin cameras in the windscreen rather than a radar sensor in the grille, as to make the installation of off-road accessories in the front of the vehicle possible. Autonomous emergency braking, blind zone warning, rear cross-traffic alert, lane-keeping assistance and centre airbags are also available in select trims.[18]