The Mazda Carol is a kei car manufactured by Mazda from 1962 until 1970. The Carol name was revived again with Mazda's 1989 re-entry into the kei car class with the Autozam brand. Since 1989, the Carol has been a rebadged model manufactured by Suzuki for Mazda, based on the Japanese Suzuki Alto. The first two generations of the modern era Carols received unique bodywork, but since late 1998 the nameplate has been strictly a badging exercise.

The Carol was perhaps overengineered: it had a very strong monocoque body, a four-cylinder four-stroke engine with a five-bearing crankshaft and four-wheel independent suspension by torsion bars,[4] but this led to high production costs, comparably high weight, and its very comfortable ride was offset by cramped accommodation. Nonetheless, the Carol was an incredible success in the marketplace, capturing 67% of the Kei market in its first year.[5] A better equipped DeLuxe version was added in May 1962, along with a changed angle of the rear window to help it stay clean.[2] In September 1963, shortly after a reshaped combustion head and upgrade to 20 PS (15 kW), a four-door version appeared.[6]

In October 1966 a minor facelift took place. The car was lightened somewhat, new bumpers were mounted, and the spare tire was moved from the front to the engine room, freeing up scarce luggage space. Also, the gearbox was now fully synchronized.[7] The last modification took place in 1969, when in response to stricter safety standards a driver's side headrest and provisions for seatbelts were fitted. Production continued until August 1970, by which time 265,226 Carol 360s had been built.[8] Mazda did not offer a Kei class passenger car for two years, until the 1972 introduction of the Chantez.

With the revival of the Kei class in the late eighties, Mazda revived the Carol name in October 1989 for the Autozam Carol. The recently introduced Autozam was to be Mazda's youthful brand and was used on Mazda's kei cars for some time. The Carol was produced for Mazda by Suzuki, and while it used the Suzuki Alto's platform and mechanicals, its interior and boldly curved exterior were largely unique.[10] Its round headlights and cute appearance were very much a product of its time and followed upon the heels of similar designs such as Nissan's Be-1 and Pao. It was either front (AA5PA) or all-wheel drive (AA5RA) and its SOHC 547 cc 3-cylinder Suzuki F5B engine produced 40 PS (29 kW) at 7,500 rpm. The Carol had a 2,335 mm (92 in) wheelbase for a total length of 3,190 mm (126 in) and was 1,295 mm (51 in) wide. Brakes were discs up front and drums in rear.[11]

Equipment levels were e, f (also 4WD), and the top g version. The g featured a Canvas Top. Four-wheel drives received a five-speed gearbox, while the front-wheel drive versions received a four- or five-speed manual or a three-speed auto. 550 cc Carols are rare, as production ended after only four months. New Kei car regulations for 1990 allowed manufacturers a bigger engine and an extra 10 cm of body length, and Mazda quickly brought out an updated Carol. 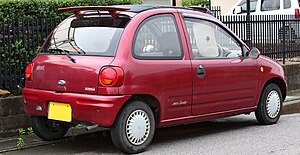 New regulations brought about the replacement of the 1989 Carol within 4 months, as the larger AA6 Carol was presented in February 1990. The new car was 6 cm longer and used a larger 657 cc Suzuki F6A engine with 52 PS (38 kW). The car is easy to tell from its predecessor by its clear headlight covers. In 1991, Mazda offered a 61 PS (45 kW) turbocharged engine, and the car was further lengthened to 329 cm in 1992.

An updated Autozam Carol came out in October 1995 as a 1996 model. Again, it was front or all-wheel drive and still sharing its platform with the Suzuki Alto. This generation also received model-specific bodywork, and was also only available as a three-door hatchback with a vestigial notchback design. A turbocharged SOHC version was available, although it was marketed without any sporting pretensions and did not even have a rev counter. Mazda also developed two retro-styled versions as a wave of such models flooded the Kei car market at the time; these were called the Carol Custom and the Carol Classic.

During 1998, the model's name was changed to "Mazda Carol" as the Autozam badge was being discontinued.

An entirely new Carol appeared in October 1998 as a 1999 model, this time with the Mazda brand name. Unlike previous Carols, this model was similar to the Suzuki Alto. This Carol was available with either front or all-wheel drive and used the old 657 cc F6A engine or a new 658 cc DOHC unit. It was closely related to the AZ-Offroad and AZ-Wagon introduced at the same time. 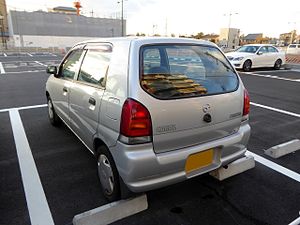 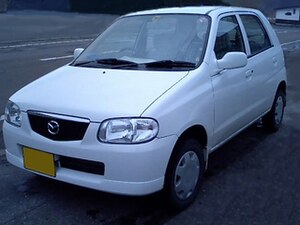 The Carol was updated with a new look in December 2000, featuring Mazda's new five-point grille design. Safety and emissions were also improved, thanks to new variants of the K-series family of engines with available variable valve timing. The earlier F6A was no longer available.

As Suzuki released a replacement for the Suzuki Alto, the rebadged Mazda Carol was also replaced. 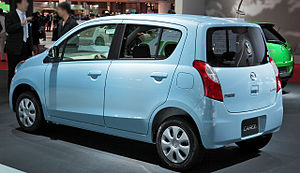 Mazda has launched a new Carol in December 2009, as 2010 model,[13] which was first revealed at the 2009 Tokyo Motor Show. The Carol has been updated alongside its brother, the Suzuki Alto. Like the Alto, the Carol is available with AWD and CVT.

As Suzuki released a replacement for the Suzuki Alto, the rebadged Mazda Carol was also replaced. 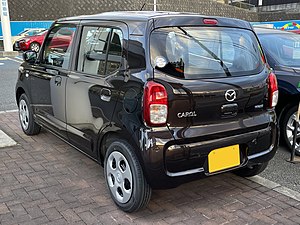