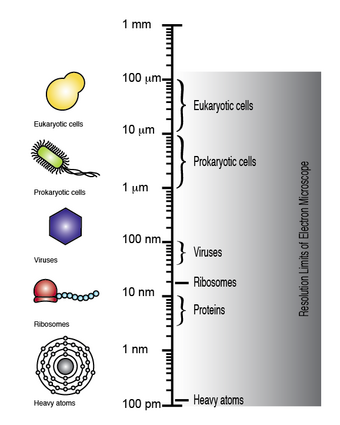 The electron microscope can achieve a resolution of up to 100 picometers, allowing eukaryotic cells, prokaryotic cells, viruses, ribosomes, and even single atoms to be visualized (note the logarithmic scale).

In order for DNA to be clearly visualized under an electron microscope, it must be labeled with heavy atoms. In addition, specialized imaging techniques and aberration corrected optics are beneficial for obtaining the resolution required to image the labeled DNA molecule. In theory, transmission electron microscopy DNA sequencing could provide extremely long read lengths, but the issue of electron beam damage may still remain and the technology has not yet been commercially developed.

Only a few years after James Watson and Francis Crick deduced the structure of DNA, and nearly two decades before Frederick Sanger published the first method for rapid DNA sequencing, Richard Feynman, an American physicist, envisioned the electron microscope as the tool that would one day allow biologists to "see the order of bases in the DNA chain".[3] Feynman believed that if the electron microscope could be made powerful enough, then it would become possible to visualize the atomic structure of any and all chemical compounds, including DNA.

The electron microscope has the capacity to obtain a resolution of up to 100 pm, whereby microscopic biomolecules and structures such as viruses, ribosomes, proteins, lipids, small molecules and even single atoms can be observed.[5]

Although DNA is visible when observed with the electron microscope, the resolution of the image obtained is not high enough to allow for deciphering the sequence of the individual bases, i.e., DNA sequencing. However, upon differential labeling of the DNA bases with heavy atoms or metals, it is possible to both visualize and distinguish between the individual bases. Therefore, electron microscopy in conjunction with differential heavy atom DNA labeling could be used to directly image the DNA in order to determine its sequence.[4][6][7][8] 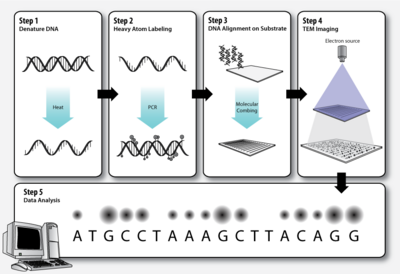 As in a standard polymerase chain reaction (PCR), the double stranded DNA molecules to be sequenced must be denatured before the second strand can be synthesized with labeled nucleotides.

The elements that make up biological molecules (C, H, N, O, P, S) are too light (low atomic number, Z) to be clearly visualized as individual atoms by transmission electron microscopy. To circumvent this problem, the DNA bases can be labeled with heavier atoms (higher Z). Each nucleotide is tagged with a characteristic heavy label, so that they can be distinguished in the transmission electron micrograph.

The DNA molecules must be stretched out on a thin, solid substrate so that order of the labeled bases will be clearly visible on the electron micrograph. Molecular combing is a technique that utilizes the force of a receding air-water interface to extend DNA molecules, leaving them irreversibly bound to a silane layer once dry.[10][11] This is one means by which alignment of the DNA on a solid substrate may be achieved. 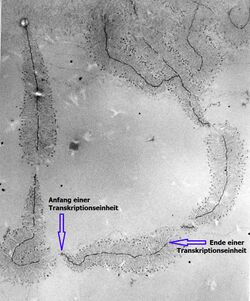 Transmission electron microscopy (TEM) produces high magnification, high resolution images by passing a beam of electrons through a very thin sample. Whereas atomic resolution has been demonstrated with conventional TEM, further improvement in spatial resolution requires correcting the spherical and chromatic aberrations of the microscope lenses. This has only been possible in scanning transmission electron microscopy where the image is obtained by scanning the object with a finely focused electron beam, in a way similar to a cathode ray tube. However, the achieved improvement in resolution comes together with irradiation of the studied object by much higher beam intensities, the concomitant sample damage and the associated imaging artefacts.[12] Different imaging techniques are applied depending on whether the sample contains heavy or light atoms:

Dark and bright spots on the electron micrograph, corresponding to the differentially labeled DNA bases, are analyzed by computer software.

Transmission electron microscopy DNA sequencing is not yet commercially available, but the long read lengths that this technology may one day provide will make it useful in a variety of contexts.

A haplotype is a series of linked alleles that are inherited together on a single chromosome. DNA sequencing can be used to genotype all of the single nucleotide polymorphisms (SNPs) that constitute a haplotype. However, short DNA sequencing reads often cannot be phased; that is, heterozygous variants cannot be confidently assigned to the correct haplotype. In fact, haplotyping with short read DNA sequencing data requires very high coverage (average >50x coverage of each DNA base) to accurately identify SNPs, as well as additional sequence data from the parents so that Mendelian transmission can be used to estimate the haplotypes.[18] Sequencing technologies that generate long reads, including transmission electron microscopy DNA sequencing, can capture entire haploblocks in a single read. That is, haplotypes are not broken up among multiple reads, and the genetically linked alleles remain together in the sequencing data. Therefore, long reads make haplotyping easier and more accurate, which is beneficial to the field of population genetics.

Genes are normally present in two copies in the diploid human genome; genes that deviate from this standard copy number are referred to as copy number variants (CNVs). Copy number variation can be benign (these are usually common variants, called copy number polymorphisms) or pathogenic.[19] CNVs are detected by fluorescence in situ hybridization (FISH) or comparative genomic hybridization (CGH). To detect the specific breakpoints at which a deletion occurs, or to detect genomic lesions introduced by a duplication or amplification event, CGH can be performed using a tiling array (array CGH), or the variant region can be sequenced. Long sequencing reads are especially useful for analyzing duplications or amplifications, as it is possible to analyze the orientation of the amplified segments if they are captured in a single sequencing read.

The microbiome refers the total collection of microbes present in a microenvironment and their respective genomes. For example, an estimated 100 trillion microbial cells colonize the human body at any given time.[22] The human microbiome is of particular interest, as these commensal bacteria are important for human health and immunity. Most of the Earth's bacterial genomes have not yet been sequenced; undertaking a microbiome sequencing project would require extensive de novo genome assembly, a prospect which is daunting with short read DNA sequencing technologies.[23] Longer reads would greatly facilitate the assembly of new microbial genomes.

Comparison to other sequencing technologies

Many non-Sanger second- and third-generation DNA sequencing technologies have been or are currently being developed with the common aim of increasing throughput and decreasing cost such that personalized genetic medicine can be fully realized.

Both the US$10 million Archon X Prize for Genomics supported by the X Prize Foundation (Santa Monica, CA, USA) and the US$70 million in grant awards supported by the National Human Genome Research Institute of the National Institutes of Health (NIH-NHGRI) are fueling the rapid burst of research activity in the development of new DNA sequencing technologies.[4]