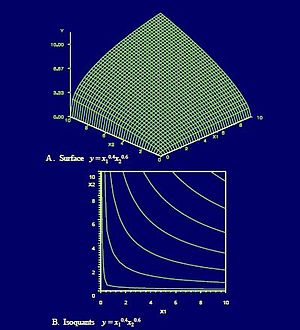 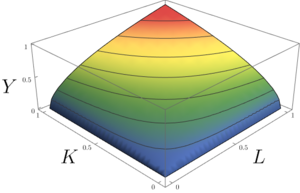 In economics and econometrics, the Cobb–Douglas production function is a particular functional form of the production function, widely used to represent the technological relationship between the amounts of two or more inputs (particularly physical capital and labor) and the amount of output that can be produced by those inputs. The Cobb–Douglas form was developed and tested against statistical evidence by Charles Cobb and Paul Douglas during 1927–1947.[1]

In its most standard form for production of a single good with two factors, the function is

Output elasticity measures the responsiveness of output to a change in levels of either labor or capital used in production, ceteris paribus. For example, if α = 0.45, a 1% increase in capital usage would lead to approximately a 0.45% increase in output.

Sometimes the term has a more restricted meaning, requiring that the function display constant returns to scale, meaning that doubling the usage of capital K and labor L will also double output Y. This holds if

returns to scale are decreasing, and if

returns to scale are increasing. Assuming perfect competition and α + β = 1, α and β can be shown to be capital's and labor's shares of output.

Paul Douglas explained that his first formulation of the Cobb–Douglas production function was developed in 1927; when seeking a functional form to relate estimates he had calculated for workers and capital, he spoke with mathematician and colleague Charles Cobb, who suggested a function of the form Y = ALβK1−β, previously used by Knut Wicksell, Philip Wicksteed, and Léon Walras, although Douglas only acknowledges Wicksteed and Walras for their contributions.[3]. Estimating this using least squares, he obtained a result for the exponent of labour of 0.75—which was subsequently confirmed by the National Bureau of Economic Research to be 0.741. Later work in the 1940s prompted them to allow for the exponents on K and L to vary, resulting in estimates that subsequently proved to be very close to improved measure of productivity developed at that time.[4]

A major criticism at the time was that estimates of the production function, although seemingly accurate, were based on such sparse data that it was hard to give them much credibility. Douglas remarked "I must admit I was discouraged by this criticism and thought of giving up the effort, but there was something which told me I should hold on."[4] The breakthrough came in using US census data, which was cross-sectional and provided a large number of observations. Douglas presented the results of these findings, along with those for other countries, at his 1947 address as president of the American Economic Association. Shortly afterwards, Douglas went into politics and was stricken by ill health—resulting in little further development on his side. However, two decades later, his production function was widely used, being adopted by economists such as Paul Samuelson and Robert Solow.[4] The Cobb–Douglas production function is especially notable for being the first time an aggregate or economy-wide production function had been developed, estimated, and then presented to the profession for analysis; it marked a landmark change in how economists approached macroeconomics from a microeconomics perspective.[5]

The function has been criticised for its lack of foundation. Cobb and Douglas were influenced by statistical evidence that appeared to show that labor and capital shares of total output were constant over time in developed countries; they explained this by statistical fitting least-squares regression of their production function. There is now doubt over whether constancy over time exists.[citation needed]

The Cobb–Douglas production function was not developed on the basis of any knowledge of engineering, technology, or management of the production process[citation needed]. This rationale may be true given the definition of the Capital term. Labor hours and Capital need a better definition. If capital is defined as a building, labor is already included in the development of that building. A building is composed of commodities, labor and risks and general conditions.

It was instead developed because it had attractive mathematical characteristics[citation needed], such as diminishing marginal returns to either factor of production and the property that the optimal expenditure shares on any given input of a firm operating a Cobb–Douglas technology are constant. Initially, there were no utility foundations for it. In the modern era, some economists try to build models up from individual agents acting, rather than imposing a functional form on an entire economy[citation needed]. The Cobb–Douglas production function, if properly defined, can be applied at a micro-economic level, up to a macro- economic level.

A 2019 quantitative survey of 3186 estimates of the shape of the production function reported in 121 studies published in peer-reviewed journals finds that the empirical literature as a whole rejects the Cobb–Douglas specification and that the elasticity of substitution between capital and labor is on average close to 0.3 instead of 1, which would be necessary for the Cobb–Douglas production function.[8]

The Cobb–Douglas function is often used as a utility function.[9][2] In this context the consumer is assumed to have finite wealth, and utility maximization takes the form:

The optimal solution is then:

An interpretation of this solution is that the consumer uses a fraction [math]\displaystyle{ \alpha_j }[/math] of his wealth in purchasing good j.

The indirect utility function can be calculated by substituting the demand into the utility function. Ignoring a certain multiplicative constant which depends only on the [math]\displaystyle{ \alpha_i }[/math]s, we get:

which is a special case of the Gorman polar form. The expenditure function is the inverse of the indirect utility function:[10]:112

Various representations of the production function

The Cobb–Douglas function form can be estimated as a linear relationship using the following expression:

The model can also be written as

As noted, the common Cobb–Douglas function used in macroeconomic modeling is

where K is capital and L is labor. When the model exponents sum to one, the production function is first-order homogeneous, which implies constant returns to scale—that is, if all inputs are scaled by a common factor greater than zero, output will be scaled by the same factor.

Relationship to the CES production function

in which the limiting case γ = 0 corresponds to a Cobb–Douglas function, [math]\displaystyle{ Y=AK^\alpha L^{1-\alpha}, }[/math] with constant returns to scale.[11]

To see this, the log of the CES function,

can be taken to the limit by applying l'Hôpital's rule:

The translog production function is an approximation of the CES function by a second-order Taylor polynomial about [math]\displaystyle{ \gamma = 0 }[/math], i.e. the Cobb–Douglas case.[12][13] The name translog stands for 'transcendental logarithmic'. It is often used in econometrics for the fact that it is linear in the parameters, which means ordinary least squares could be used if inputs could be assumed exogenous.

In the two-factor case above the translog production function is