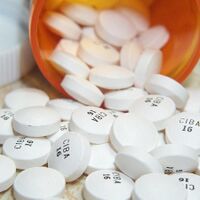 Methylphenidate, in the form of Ritalin pills

Modern drug regulation has historical roots in the response to the proliferation of universal antidotes which appeared in the wake of Mithridates' death.[1] Mithridates had brought together physicians, scientists, and shamans to concoct a potion that would make him immune to poisons. Following his death, the Romans became keen on further developing the Mithridates potion's recipe. Mithridatium re-entered western society through multiple means. The first was through the Leechbook of the Bald (Bald's Leechbook), written somewhere between 900 and 950, which contained a formula for various remedies, including for a theriac. Additionally, theriac became a commercial good traded throughout Europe based on the works of Greek and Roman physicians.[2]

The resulting proliferation of various recipes needed to be curtailed in order to ensure that people were not passing off fake antidotes, which led to the development of government involvement and regulation. Additionally, the creation of these concoctions took on ritualistic form and were often created in public and the process was observed and recorded. It was believed that if the concoction proved unsuccessful, it was due to the apothecaries' process of making them and they could be held accountable because of the public nature of the creation.[2]

In the ninth century, many Muslim countries established an office of the hisba, which in addition to regulating compliance to Islamic principles and values took on the role of regulating other aspects of social and economic life, including the regulation of medicines. Inspectors were appointed to employ oversight on those who were involved in the process of medicine creation and were given a lot of leeway to ensure compliance and punishments were stringent.[3] The first official 'act', the 'Apothecary Wares, Drugs and Stuffs' Act (also sometimes referred to as the 'Pharmacy Wares, Drugs and Stuffs' Act) was passed in 1540 by Henry VIII and set the foundation for others. Through this act, he encouraged physicians in his College of Physicians (founded by him in 1518) to appoint four people dedicated to consistently inspecting what was being sold in apothecary shops.[2] In conjunction with this first piece of legislation, there was an emergence of standard formulas for the creation of certain 'drugs' and 'antidotes' through Pharmacopoeias which first appeared in the form of a decree from Frederick II of Sicily in 1240 to use consistent and standard formulas.[4] The first modern pharmacopoeias were the Florence Pharmacopoeia published in 1498,[2] the Spanish Pharmacopoeia published in 1581 and the London Pharmacopoeia published in 1618.[5]

Various other events throughout history have demonstrated the importance of drug and medicine regulation keeping up with scientific advances. In 2006, the challenges associated with TGN 1412 highlighted the shortcomings of animal models and paved the way for further advances in regulation and development for biological products. Rofecoxib represents a drug that was on the market that had not clearly represent the risks associated with the use drug which led to the concept of 'risk management planning' within the field of regulation by introducing the need to understand how various safety concerns would be managed. Various cases over recent years have demonstrated the need for regulation to keep up with scientific advances that have implications for people's health.[6]

In the United States, regulation of drugs was originally a state right, as opposed to federal right. But with the increase in fraudulent practices due to private incentives to maximize profits and poor enforcement of state laws, the need for stronger federal regulation increased.[7] In 1906 President Roosevelt signed the Federal Food and Drug Act (FFDA) which both established stricter national standards for drug manufacture and sales, and also established the Federal government as the regulating authority over the US drug industry.[7] A 1911 Supreme Court decision, United States vs. Johnson, established that misleading statements were not covered under the FFDA. This directly led to Congress passing the Sherley Amendment which established a clearer definition of 'drug marketing requirements'.[7]

More catalysts for advances in drug regulation in the US were certain catastrophes that served as calls to the US government to step in and impose regulations that would prevent repeats of those instances. One such instance occurred in 1937 when more than a hundred people died from using sulfanilamide elixir which had not gone through any safety testing.[7][4] This directly led to the passing of the Federal, Food, Drug, and Cosmetic Act in 1938. One other major catastrophe occurred in the late 1950s when Thalidomide, which was originally sold in Germany (introduced into a virtually unregulated market) and eventually sold around the world, led to approximately 100,000 babies being born with various deformities.[4] In 1962 the United States Congress passed the Drug Amendments Act of 1962. The Drug Amendments Act required the FDA to ensure that new drugs being introduced to the market had passed certain tests and standards.[7]

The UK's Chief Medical Officer had established a group to look into safety of drugs on the market in 1959 prior to the crisis and was moving in the direction of address the problem of unregulated drugs entering the market. The crisis created a greater sense of emergency to establish safety and efficacy standards around the world. The UK started a temporary Committee on Safety of Drugs while they attempted to pass more comprehensive legislation. Though compliance and submission of drugs to the Committee on Safety of Drugs was not mandatory immediately after, the pharmaceutical industry later complied due to the thalidomide situation.

The European Economic Commission also passed a directive in 1965 in order to impose greater efficacy standards before marketing a drug.[6] Drug legislation in both the EU and US were passed in order to assure drug safety and efficacy. Of note, increased regulations and standards for testing actually led to greater innovation in pharmaceutical research in the 1960s, despite greater preclinical and clinical standards.[6] In 1989, the International Conference of Drug Regulatory Authorities organized by the WHO, officials from around the world discussed the necessity for streamlined processes for global drug approval.[4]

Under the SUSDP, medicinal agents generally belong to one of five categories:

Therapeutic goods in Brazil are regulated by the Ministry of Health of Brazil, through its Brazilian Health Regulatory Agency (Anvisa), equivalent to the US Food and Drug Administration. There are six main categories:

Biological medications are complex molecules of high molecular weight obtained from a biological source or biotechnological procedures and are divided by Anvisa into the following categories:[10]

The regulatory status of vaccines, which determines their marketing and distribution, may be one of the following established by Anvisa:[13]

Vaccines can only be administered in public health centers or authorized private vaccination services.[15]

In Canada, regulation of therapeutic goods are governed by the Food and Drug Act and associated regulations. In addition, the Controlled Drugs and Substances Act specifies additional regulatory requirements for controlled drugs and drug precursors.[16]

In Ontario, the Drug and Pharmacies Regulation Act governs "any substance that is used in the diagnosis, treatment, mitigation or prevention of a diseasein humans, animals or fowl."[17]

The regulation of drugs in China is governed by the China Food and Drug Administration.

The European Union (EU) medicines regulatory system is based on a network of around 50 regulatory authorities from the 31 EEA countries (28 EU Member States plus Iceland, Liechtenstein and Norway), the European Commission and European Medicines Agency (EMA). EMA and the Member States cooperate and share expertise in the assessment of new medicines and of new safety information. They also rely on each other for exchange of information in the regulation of medicine, for example regarding the reporting of side effects of medicines, the oversight of clinical trials, and the conduct of inspections of medicines' manufacturers and compliance with good clinical practice (GCP), good manufacturing practice (GMP), good distribution practice (GDP), and good pharmacovigilance practice (GVP). EU legislation requires that each Member State operates to the same rules and requirements regarding the authorisation and monitoring of medicines.[18]

Medicines in Iceland are regulated by the Icelandic Medicines Control Agency.[19]

Drugs are classified under five headings. Under retail and distribution:

Medicines in the Ireland are regulated according to the Misuse of Drugs Regulations 1988. Controlled drugs (CDs) are divided into five categories based on their potential for misuse and therapeutic effectiveness.

Medicines in Norway are divided into five groups:

Narcotics, sedative-hypnotics, and amphetamines in this class require a special prescription form:

Class F - Substances and package-sizes not requiring a prescription

Unclassifieds - Brands and packages not actively marketed in Norway

The Food and Drug Administration regulates drugs and medical devices in the Philippines .

Prohibited. Brands and packages not actively marketed in Sri Lanka.

Medicines in Switzerland are regulated by Swissmedic. The country is not part of the European Union, and is regarded by many as one of the easiest places to conduct clinical trials on new drug compounds.

There are five categories from A to E to cover different types of delivery category:[23]

Medicines for Human Use in the United Kingdom are regulated by the Medicines and Healthcare products Regulatory Agency (MHRA). The availability of drugs is regulated by classification by the MHRA as part of marketing authorisation of a product.

The United Kingdom has a three-tiered classification system:

Therapeutic goods in the United States are regulated by the U.S. Food and Drug Administration (FDA), which makes some drugs available over the counter (OTC) at retail outlets and others by prescription only.

The prescription or possession of some substances is controlled or prohibited by the Controlled Substances Act, under the FDA and the Drug Enforcement Administration (DEA). Some US states apply more stringent limits on the prescription of certain controlled substances C-V and BTC (behind the counter) drugs such as pseudoephedrine. Three primary branches of pharmacovigilance in the U.S. include the FDA, the pharmaceutical manufacturers, and the academic/non-profit organizations (such as RADAR and Public Citizen).