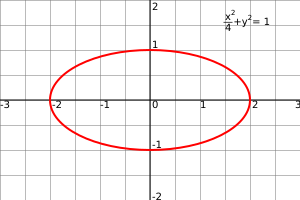 Analytic geometry associates to each point in the Euclidean plane an ordered pair. The red ellipse is associated with the set of all pairs (x,y) such that x2/4+y2=1.

Ordered pairs are also called 2-tuples, or sequences (sometimes, lists in a computer science context) of length 2. Ordered pairs of scalars are sometimes called 2-dimensional vectors. (Technically, this is an abuse of terminology since an ordered pair need not be an element of a vector space.) The entries of an ordered pair can be other ordered pairs, enabling the recursive definition of ordered n-tuples (ordered lists of n objects). For example, the ordered triple (a,b,c) can be defined as (a, (b,c)), i.e., as one pair nested in another.

The (a, b) notation may be used for other purposes, most notably as denoting open intervals on the real number line. In such situations, the context will usually make it clear which meaning is intended.[1][2] For additional clarification, the ordered pair may be denoted by the variant notation [math]\displaystyle{ \langle a,b\rangle }[/math], but this notation also has other uses.

The left and right projection of a pair p is usually denoted by π1(p) and π2(p), or by πℓ(p) and πr(p), respectively. In contexts where arbitrary n-tuples are considered, πni(t) is a common notation for the i-th component of an n-tuple t.

In some introductory mathematics textbooks an informal (or intuitive) definition of ordered pair is given, such as

This "definition" is unsatisfactory because it is only descriptive and is based on an intuitive understanding of order. However, as is sometimes pointed out, no harm will come from relying on this description and almost everyone thinks of ordered pairs in this manner.[4]

Another way to rigorously deal with ordered pairs is to define them formally in the context of set theory. This can be done in several ways and has the advantage that existence and the characteristic property can be proven from the axioms that define the set theory. One of the most cited versions of this definition is due to Kuratowski (see below) and his definition was used in the second edition of Bourbaki's Theory of Sets, published in 1970. Even those mathematical textbooks that give an informal definition of ordered pairs will often mention the formal definition of Kuratowski in an exercise.

Norbert Wiener proposed the first set theoretical definition of the ordered pair in 1914:[7]

Wiener used {{b}} instead of {b} to make the definition compatible with type theory where all elements in a class must be of the same "type". With b nested within an additional set, its type is equal to [math]\displaystyle{ \{\{a\}, \emptyset\} }[/math]'s.

About the same time as Wiener (1914), Felix Hausdorff proposed his definition:

"where 1 and 2 are two distinct objects different from a and b."[8]

In 1921 Kazimierz Kuratowski offered the now-accepted definition[9][10] of the ordered pair (a, b):

Note that this definition is used even when the first and the second coordinates are identical:

Given some ordered pair p, the property "x is the first coordinate of p" can be formulated as:

The property "x is the second coordinate of p" can be formulated as:

This is how we can extract the first coordinate of a pair (using the iterated-operation notation for arbitrary intersection and arbitrary union):

This is how the second coordinate can be extracted:

The reverse definition is merely a trivial variant of the Kuratowski definition, and as such is of no independent interest. The definition short is so-called because it requires two rather than three pairs of braces. Proving that short satisfies the characteristic property requires the Zermelo–Fraenkel set theory axiom of regularity.[12] Moreover, if one uses von Neumann's set-theoretic construction of the natural numbers, then 2 is defined as the set {0, 1} = {0, {0}}, which is indistinguishable from the pair (0, 0)short. Yet another disadvantage of the short pair is the fact that, even if a and b are of the same type, the elements of the short pair are not. (However, if a = b then the short version keeps having cardinality 2, which is something one might expect of any "pair", including any "ordered pair".

By this, [math]\displaystyle{ \psi(x) }[/math] does always contain the number 0.

Finally, define the ordered pair (A, B) as the disjoint union

In type theory and in outgrowths thereof such as the axiomatic set theory NF, the Quine–Rosser pair has the same type as its projections and hence is termed a "type-level" ordered pair. Hence this definition has the advantage of enabling a function, defined as a set of ordered pairs, to have a type only 1 higher than the type of its arguments. This definition works only if the set of natural numbers is infinite. This is the case in NF, but not in type theory or in NFU. J. Barkley Rosser showed that the existence of such a type-level ordered pair (or even a "type-raising by 1" ordered pair) implies the axiom of infinity. For an extensive discussion of the ordered pair in the context of Quinian set theories, see Holmes (1998).[16]

Early in the development of the set theory, before paradoxes were discovered, Cantor followed Frege by defining the ordered pair of two sets as the class of all relations that hold between these sets, assuming that the notion of relation is primitive:[17]

This definition is inadmissible in most modern formalized set theories and is methodologically similar to defining the cardinal of a set as the class of all sets equipotent with the given set.[18]

This renders possible pairs whose projections are proper classes. The Quine–Rosser definition above also admits proper classes as projections. Similarly the triple is defined as a 3-tuple as follows:

The use of the singleton set [math]\displaystyle{ s(x) }[/math] which has an inserted empty set allows tuples to have the uniqueness property that if a is an n-tuple and b is an m-tuple and a = b then n = m. Ordered triples which are defined as ordered pairs do not have this property with respect to ordered pairs.

This definition is acceptable because this extension of ZF is a conservative extension.

A category-theoretic product A × B in a category of sets represents the set of ordered pairs, with the first element coming from A and the second coming from B. In this context the characteristic property above is a consequence of the universal property of the product and the fact that elements of a set X can be identified with morphisms from 1 (a one element set) to X. While different objects may have the universal property, they are all naturally isomorphic.