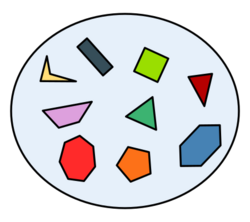 A set of polygons in an Euler diagram

A set is the mathematical model for a collection of different[1] things;[2][3][4] a set contains elements or members, which can be mathematical objects of any kind: numbers, symbols, points in space, lines, other geometrical shapes, variables, or even other sets.[5] The set with no element is the empty set; a set with a single element is a singleton. A set may have a finite number of elements or be an infinite set. Two sets are equal if they have precisely the same elements.[6]

Sets are ubiquitous in modern mathematics. Indeed, set theory, more specifically Zermelo–Fraenkel set theory, has been the standard way to provide rigorous foundations for all branches of mathematics since the first half of the 20th century.[5]

The concept of a set emerged in mathematics at the end of the 19th century.[7] The German word for set, Menge, was coined by Bernard Bolzano in his work Paradoxes of the Infinite.[8][9][10]

Passage with a translation of the original set definition of Georg Cantor. The German word Menge for set is translated with aggregate here.

Georg Cantor, one of the founders of set theory, gave the following definition at the beginning of his Beiträge zur Begründung der transfiniten Mengenlehre:[1]

A set is a gathering together into a whole of definite, distinct objects of our perception or our thought—which are called elements of the set.

When mathematicians deal with what they call a manifold, aggregate, Menge, ensemble, or some equivalent name, it is common, especially where the number of terms involved is finite, to regard the object in question (which is in fact a class) as defined by the enumeration of its terms, and as consisting possibly of a single term, which in that case is the class.

The simple concept of a set has proved enormously useful in mathematics, but paradoxes arise if no restrictions are placed on how sets can be constructed:

Naïve set theory defines a set as any well-defined collection of distinct elements, but problems arise from the vagueness of the term well-defined.

In subsequent efforts to resolve these paradoxes since the time of the original formulation of naïve set theory, the properties of sets have been defined by axioms. Axiomatic set theory takes the concept of a set as a primitive notion.[13] The purpose of the axioms is to provide a basic framework from which to deduce the truth or falsity of particular mathematical propositions (statements) about sets, using first-order logic. According to Gödel's incompleteness theorems however, it is not possible to use first-order logic to prove any such particular axiomatic set theory is free from paradox.

How sets are defined and set notation

Mathematical texts commonly denote sets by capital letters[14][5] in italic, such as A, B, C.[15] A set may also be called a collection or family, especially when its elements are themselves sets.

Roster or enumeration notation defines a set by listing its elements between curly brackets, separated by commas:[16][17][18][19]

For sets with many elements, especially those following an implicit pattern, the list of members can be abbreviated using an ellipsis '...'.[22][23] For instance, the set of the first thousand positive integers may be specified in roster notation as

An infinite set is a set with an endless list of elements. To describe an infinite set in roster notation, an ellipsis is placed at the end of the list, or at both ends, to indicate that the list continues forever. For example, the set of nonnegative integers is

and the set of all integers is

Another way to define a set is to use a rule to determine what the elements are:

Let A be the set whose members are the first four positive integers.
Let B be the set of colors of the French flag.

Such a definition is called a semantic description.[24][25]

Set-builder notation specifies a set as a selection from a larger set, determined by a condition on the elements.[25][26][27] For example, a set F can be defined as follows:

In this notation, the vertical bar "|" means "such that", and the description can be interpreted as "F is the set of all numbers n such that n is an integer in the range from 0 to 19 inclusive". Some authors use a colon ":" instead of the vertical bar.[28]

A singleton set is a set with exactly one element; such a set may also be called a unit set.[6] Any such set can be written as {x}, where x is the element. The set {x} and the element x mean different things; Halmos[35] draws the analogy that a box containing a hat is not the same as the hat.

If every element of set A is also in B, then A is described as being a subset of B, or contained in B, written A ⊆ B,[36] or B ⊇ A.[37] The latter notation may be read B contains A, B includes A, or B is a superset of A. The relationship between sets established by ⊆ is called inclusion or containment. Two sets are equal if they contain each other: A ⊆ B and B ⊆ A is equivalent to A = B.[26] 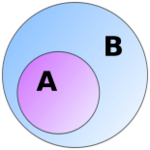 A Venn diagram, in contrast, is a graphical representation of n sets in which the n loops divide the plane into 2n zones such that for each way of selecting some of the n sets (possibly all or none), there is a zone for the elements that belong to all the selected sets and none of the others. For example, if the sets are A, B, and C, there should be a zone for the elements that are inside A and C and outside B (even if such elements do not exist).

Special sets of numbers in mathematics 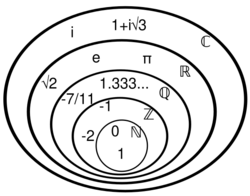 There are sets of such mathematical importance, to which mathematicians refer so frequently, that they have acquired special names and notational conventions to identify them.

Each of the above sets of numbers has an infinite number of elements. Each is a subset of the sets listed below it.

Sets of positive or negative numbers are sometimes denoted by superscript plus and minus signs, respectively. For example, [math]\displaystyle{ \mathbf{Q}^+ }[/math] represents the set of positive rational numbers.

More formally, two sets share the same cardinality if there exists a one-to-one correspondence between them.

The cardinality of the empty set is zero.[43]

The list of elements of some sets is endless, or infinite. For example, the set [math]\displaystyle{ \N }[/math] of natural numbers is infinite.[26] In fact, all the special sets of numbers mentioned in the section above are infinite. Infinite sets have infinite cardinality.

The continuum hypothesis, formulated by Georg Cantor in 1878, is the statement that there is no set with cardinality strictly between the cardinality of the natural numbers and the cardinality of a straight line.[46] In 1963, Paul Cohen proved that the continuum hypothesis is independent of the axiom system ZFC consisting of Zermelo–Fraenkel set theory with the axiom of choice.[47] (ZFC is the most widely-studied version of axiomatic set theory.)

Main page: Partition of a set 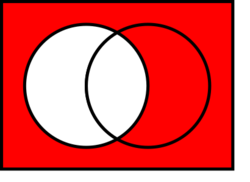 The complement of A in U

Suppose that a universal set U (a set containing all elements being discussed) has been fixed, and that A is a subset of U. 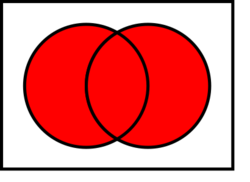 The union of A and B, denoted A ∪ B 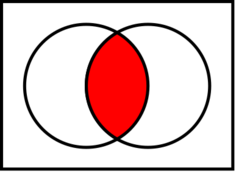 The intersection of A and B, denoted A ∩ B 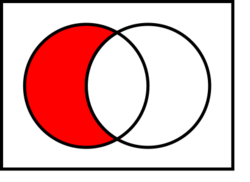 The set difference A \ B 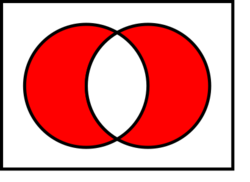 The symmetric difference of A and B

Given any two sets A and B,

The operations above satisfy many identities. For example, one of De Morgan's laws states that (A ∪ B)′ = A′ ∩ B′ (that is, the elements outside the union of A and B are the elements that are outside A and outside B).

The cardinality of A × B is the product of the cardinalities of A and B. (This is an elementary fact when A and B are finite. When one or both are infinite, multiplication of cardinal numbers is defined to make this true.)

The power set of any set becomes a Boolean ring with symmetric difference as the addition of the ring and intersection as the multiplication of the ring.

Sets are ubiquitous in modern mathematics. For example, structures in abstract algebra, such as groups, fields and rings, are sets closed under one or more operations.

One of the main applications of naive set theory is in the construction of relations. A relation from a domain A to a codomain B is a subset of the Cartesian product A × B. For example, considering the set S = {rock, paper, scissors} of shapes in the game of the same name, the relation "beats" from S to S is the set B = {(scissors,paper), (paper,rock), (rock,scissors)}; thus x beats y in the game if the pair (x,y) is a member of B. Another example is the set F of all pairs (x, x2), where x is real. This relation is a subset of R × R, because the set of all squares is subset of the set of all real numbers. Since for every x in R, one and only one pair (x,...) is found in F, it is called a function. In functional notation, this relation can be written as F(x) = x2.

Principle of inclusion and exclusion 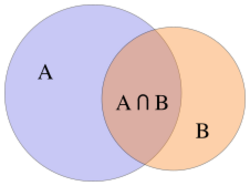 The inclusion–exclusion principle is a technique for counting the elements in a union of two finite sets in terms of the sizes of the two sets and their intersection. It can be expressed symbolically as [math]\displaystyle{ |A \cup B| = |A| + |B| - |A \cap B|. }[/math]