In mathematics, a sequence is an enumerated collection of objects in which repetitions are allowed and order matters. Like a set, it contains members (also called elements, or terms). The number of elements (possibly infinite) is called the length of the sequence. Unlike a set, the same elements can appear multiple times at different positions in a sequence, and unlike a set, the order does matter. Formally, a sequence can be defined as a function from natural numbers (the positions of elements in the sequence) to the elements at each position. The notion of a sequence can be generalized to an indexed family, defined as a function from an arbitrary index set. 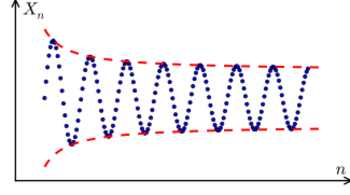 An infinite sequence of real numbers (in blue). This sequence is neither increasing, decreasing, convergent, nor Cauchy. It is, however, bounded.

A sequence can be thought of as a list of elements with a particular order.[1][2] Sequences are useful in a number of mathematical disciplines for studying functions, spaces, and other mathematical structures using the convergence properties of sequences. In particular, sequences are the basis for series, which are important in differential equations and analysis. Sequences are also of interest in their own right, and can be studied as patterns or puzzles, such as in the study of prime numbers. 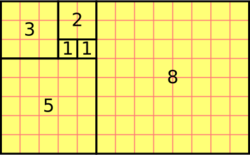 A tiling with squares whose sides are successive Fibonacci numbers in length.

The prime numbers are the natural numbers greater than 1 that have no divisors but 1 and themselves. Taking these in their natural order gives the sequence (2, 3, 5, 7, 11, 13, 17, ...). The prime numbers are widely used in mathematics, particularly in number theory where many results related to them exist.

Another example of sequences is a sequence of functions, where each member of the sequence is a function whose shape is determined by a natural number indexing that function.

The On-Line Encyclopedia of Integer Sequences comprises a large list of examples of integer sequences.[3]

Other notations can be useful for sequences whose pattern cannot be easily guessed or for sequences that do not have a pattern such as the digits of π. One such notation is to write down a general formula for computing the nth term as a function of n, enclose it in parentheses, and include a subscript indicating the set of values that n can take. For example, in this notation the sequence of even numbers could be written as [math]\displaystyle{ (2n)_{n\in\mathbb N} }[/math]. The sequence of squares could be written as [math]\displaystyle{ (n^2)_{n\in\mathbb N} }[/math]. The variable n is called an index, and the set of values that it can take is called the index set.

In cases where the set of indexing numbers is understood, the subscripts and superscripts are often left off. That is, one simply writes [math]\displaystyle{ (a_k) }[/math] for an arbitrary sequence. Often, the index k is understood to run from 1 to ∞. However, sequences are frequently indexed starting from zero, as in

In some cases, the elements of the sequence are related naturally to a sequence of integers whose pattern can be easily inferred. In these cases, the index set may be implied by a listing of the first few abstract elements. For instance, the sequence of squares of odd numbers could be denoted in any of the following ways.

Moreover, the subscripts and superscripts could have been left off in the third, fourth, and fifth notations, if the indexing set was understood to be the natural numbers. In the second and third bullets, there is a well-defined sequence [math]\displaystyle{ (a_{k})_{k=1}^\infty }[/math], but it is not the same as the sequence denoted by the expression.

Defining a sequence by recursion

Sequences whose elements are related to the previous elements in a straightforward way are often defined using recursion. This is in contrast to the definition of sequences of elements as functions of their positions.

To define a sequence by recursion, one needs a rule, called recurrence relation to construct each element in terms of the ones before it. In addition, enough initial elements must be provided so that all subsequent elements of the sequence can be computed by successive applications of the recurrence relation.

The Fibonacci sequence is a simple classical example, defined by the recurrence relation

where [math]\displaystyle{ c_1,\dots, c_k }[/math] are polynomials in n. For most holonomic sequences, there is no explicit formula for expressing [math]\displaystyle{ a_n }[/math] as a function of n. Nevertheless, holonomic sequences play an important role in various areas of mathematics. For example, many special functions have a Taylor series whose sequence of coefficients is holonomic. The use of the recurrence relation allows a fast computation of values of such special functions.

There are many different notions of sequences in mathematics, some of which (e.g., exact sequence) are not covered by the definitions and notations introduced below.

Although sequences are a type of function, they are usually distinguished notationally from functions in that the input is written as a subscript rather than in parentheses, that is, an rather than a(n). There are terminological differences as well: the value of a sequence at the lowest input (often 1) is called the "first element" of the sequence, the value at the second smallest input (often 2) is called the "second element", etc. Also, while a function abstracted from its input is usually denoted by a single letter, e.g. f, a sequence abstracted from its input is usually written by a notation such as [math]\displaystyle{ (a_n)_{n\in A} }[/math], or just as [math]\displaystyle{ (a_n). }[/math] Here A is the domain, or index set, of the sequence.

Sequences and their limits (see below) are important concepts for studying topological spaces. An important generalization of sequences is the concept of nets. A net is a function from a (possibly uncountable) directed set to a topological space. The notational conventions for sequences normally apply to nets as well.

The length of a sequence is defined as the number of terms in the sequence.

A sequence of a finite length n is also called an n-tuple. Finite sequences include the empty sequence ( ) that has no elements.

Other types of sequences

Some other types of sequences that are easy to define include:

Main page: Limit of a sequence 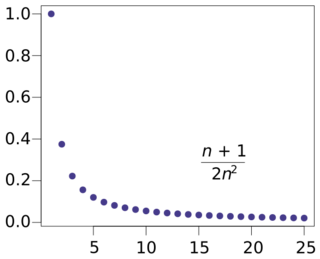 The plot of a convergent sequence (an) is shown in blue. From the graph we can see that the sequence is converging to the limit zero as n increases. 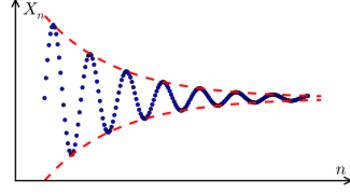 The plot of a Cauchy sequence (Xn), shown in blue, as Xn versus n. In the graph the sequence appears to be converging to a limit as the distance between consecutive terms in the sequence gets smaller as n increases. In the real numbers every Cauchy sequence converges to some limit.

A sequence of real numbers is convergent (in the reals) if and only if it is Cauchy.

Metric spaces that satisfy the Cauchy characterization of convergence for sequences are called complete metric spaces and are particularly nice for analysis.

In this case we say that the sequence diverges, or that it converges to infinity. An example of such a sequence is an = n.

and say that the sequence diverges or converges to negative infinity.

Use in other fields of mathematics

Sequences play an important role in topology, especially in the study of metric spaces. For instance:

Sequences can be generalized to nets or filters. These generalizations allow one to extend some of the above theorems to spaces without metrics.

The topological product of a sequence of topological spaces is the cartesian product of those spaces, equipped with a natural topology called the product topology.

In analysis, when talking about sequences, one will generally consider sequences of the form

which is to say, infinite sequences of elements indexed by natural numbers.

A sequence may start with an index different from 1 or 0. For example, the sequence defined by xn = 1/log(n) would be defined only for n ≥ 2. When talking about such infinite sequences, it is usually sufficient (and does not change much for most considerations) to assume that the members of the sequence are defined at least for all indices large enough, that is, greater than some given N.

The most elementary type of sequences are numerical ones, that is, sequences of real or complex numbers. This type can be generalized to sequences of elements of some vector space. In analysis, the vector spaces considered are often function spaces. Even more generally, one can study sequences with elements in some topological space.

A sequence space is a vector space whose elements are infinite sequences of real or complex numbers. Equivalently, it is a function space whose elements are functions from the natural numbers to the field K, where K is either the field of real numbers or the field of complex numbers. The set of all such functions is naturally identified with the set of all possible infinite sequences with elements in K, and can be turned into a vector space under the operations of pointwise addition of functions and pointwise scalar multiplication. All sequence spaces are linear subspaces of this space. Sequence spaces are typically equipped with a norm, or at least the structure of a topological vector space.

The most important sequences spaces in analysis are the ℓp spaces, consisting of the p-power summable sequences, with the p-norm. These are special cases of Lp spaces for the counting measure on the set of natural numbers. Other important classes of sequences like convergent sequences or null sequences form sequence spaces, respectively denoted c and c0, with the sup norm. Any sequence space can also be equipped with the topology of pointwise convergence, under which it becomes a special kind of Fréchet space called an FK-space.

Sequences over a field may also be viewed as vectors in a vector space. Specifically, the set of F-valued sequences (where F is a field) is a function space (in fact, a product space) of F-valued functions over the set of natural numbers.

Abstract algebra employs several types of sequences, including sequences of mathematical objects such as groups or rings.

If A is a set, the free monoid over A (denoted A*, also called Kleene star of A) is a monoid containing all the finite sequences (or strings) of zero or more elements of A, with the binary operation of concatenation. The free semigroup A+ is the subsemigroup of A* containing all elements except the empty sequence.

In the context of group theory, a sequence

of groups and group homomorphisms is called exact, if the image (or range) of each homomorphism is equal to the kernel of the next:

The sequence of groups and homomorphisms may be either finite or infinite.

A similar definition can be made for certain other algebraic structures. For example, one could have an exact sequence of vector spaces and linear maps, or of modules and module homomorphisms.

In homological algebra and algebraic topology, a spectral sequence is a means of computing homology groups by taking successive approximations. Spectral sequences are a generalization of exact sequences, and since their introduction by Jean Leray (1946), they have become an important research tool, particularly in homotopy theory.

An infinite binary sequence can represent a formal language (a set of strings) by setting the n th bit of the sequence to 1 if and only if the n th string (in shortlex order) is in the language. This representation is useful in the diagonalization method for proofs.[11]