Short description: Elements of a field, e.g. real numbers, in the context of linear algebra

A scalar is an element of a field which is used to define a vector space. In linear algebra, real numbers or generally elements of a field are called scalars and relate to vectors in an associated vector space through the operation of scalar multiplication (defined in the vector space), in which a vector can be multiplied by a scalar in the defined way to produce another vector.[1][2][3] Generally speaking, a vector space may be defined by using any field instead of real numbers (such as complex numbers). Then scalars of that vector space will be elements of the associated field (such as complex numbers).

A scalar product operation – not to be confused with scalar multiplication – may be defined on a vector space, allowing two vectors to be multiplied in the defined way to produce a scalar. A vector space equipped with a scalar product is called an inner product space.

A quantity described by multiple scalars, such as having both direction and magnitude, is called a vector.[4] The term scalar is also sometimes used informally to mean a vector, matrix, tensor, or other, usually, "compound" value that is actually reduced to a single component. Thus, for example, the product of a 1 × n matrix and an n × 1 matrix, which is formally a 1 × 1 matrix, is often said to be a scalar. The real component of a quaternion is also called its scalar part.

The term scalar matrix is used to denote a matrix of the form kI where k is a scalar and I is the identity matrix.

The word scalar derives from the Latin word scalaris, an adjectival form of scala (Latin for "ladder"), from which the English word scale also comes. The first recorded usage of the word "scalar" in mathematics occurs in François Viète's Analytic Art (In artem analyticem isagoge) (1591):[5] [6]

Magnitudes that ascend or descend proportionally in keeping with their nature from one kind to another may be called scalar terms.
(Latin: Magnitudines quae ex genere ad genus sua vi proportionaliter adscendunt vel descendunt, vocentur Scalares.)

According to a citation in the Oxford English Dictionary the first recorded usage of the term "scalar" in English came with W. R. Hamilton in 1846, referring to the real part of a quaternion:

The algebraically real part may receive, according to the question in which it occurs, all values contained on the one scale of progression of numbers from negative to positive infinity; we shall call it therefore the scalar part. 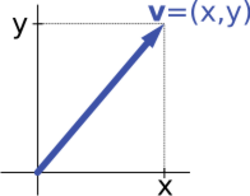 Scalars are real numbers used in linear algebra, as opposed to vectors. This image shows a Euclidean vector. Its coordinates x and y are scalars, as is its length, but v is not a scalar.

A vector space is defined as a set of vectors (additive abelian group), a set of scalars (field), and a scalar multiplication operation that takes a scalar k and a vector v to form another vector kv. For example, in a coordinate space, the scalar multiplication [math]\displaystyle{ k(v_1, v_2, \dots, v_n) }[/math] yields [math]\displaystyle{ (k v_1, k v_2, \dots, k v_n) }[/math]. In a (linear) function space, kf is the function x ↦ k(f(x)).

The scalars can be taken from any field, including the rational, algebraic, real, and complex numbers, as well as finite fields.

The norm is usually defined to be an element of V's scalar field K, which restricts the latter to fields that support the notion of sign. Moreover, if V has dimension 2 or more, K must be closed under square root, as well as the four arithmetic operations; thus the rational numbers Q are excluded, but the surd field is acceptable. For this reason, not every scalar product space is a normed vector space.

In this case the "scalars" may be complicated objects. For instance, if R is a ring, the vectors of the product space Rn can be made into a module with the n×n matrices with entries from R as the scalars. Another example comes from manifold theory, where the space of sections of the tangent bundle forms a module over the algebra of real functions on the manifold.

The scalar multiplication of vector spaces and modules is a special case of scaling, a kind of linear transformation.