The European Organization for Nuclear Research (French: Organisation européenne pour la recherche nucléaire), known as CERN (/sɜːrn/; French pronunciation: ​[sɛʁn]; derived from the name Conseil européen pour la recherche nucléaire), is a European research organization that operates the largest particle physics laboratory in the world. Established in 1954, the organization is based in a northwest suburb of Geneva on the Franco–Swiss border and has 23 member states.[3] Israel is the only non-European country granted full membership.[4] CERN is an official United Nations Observer.[5]

The acronym CERN is also used to refer to the laboratory, which in 2016 had 2,500 scientific, technical, and administrative staff members, and hosted about 12,000 users. In the same year, CERN generated 49 petabytes of data.[6]

CERN's main function is to provide the particle accelerators and other infrastructure needed for high-energy physics research – as a result, numerous experiments have been constructed at CERN through international collaborations. The main site at Meyrin hosts a large computing facility, which is primarily used to store and analyse data from experiments, as well as simulate events. Researchers need remote access to these facilities, so the lab has historically been a major wide area network hub. CERN is also the birthplace of the World Wide Web.[7][8]

The convention establishing CERN was ratified on 29 September 1954 by 12 countries in Western Europe.[1] The acronym CERN originally represented the French words for Conseil Européen pour la Recherche Nucléaire (European Council for Nuclear Research), which was a provisional council for building the laboratory, established by 12 European governments in 1952. The acronym was retained for the new laboratory after the provisional council was dissolved, even though the name changed to the current Organisation Européenne pour la Recherche Nucléaire (European Organization for Nuclear Research) in 1954.[9] According to Lew Kowarski, a former director of CERN, when the name was changed, the abbreviation could have become the awkward OERN, and Werner Heisenberg said that this could "still be CERN even if the name is [not]".[citation needed]

CERN's first president was Sir Benjamin Lockspeiser. Edoardo Amaldi was the general secretary of CERN at its early stages when operations were still provisional, while the first Director-General (1954) was Felix Bloch.[10]

The laboratory was originally devoted to the study of atomic nuclei, but was soon applied to higher-energy physics, concerned mainly with the study of interactions between subatomic particles. Therefore, the laboratory operated by CERN is commonly referred to as the European laboratory for particle physics (Laboratoire européen pour la physique des particules), which better describes the research being performed there.

At the sixth session of the CERN Council, which took place in Paris from 29 June - 1 July 1953, the convention establishing the organization was signed, subject to ratification, by 12 states. The convention was gradually ratified by the 12 founding Member States: Belgium, Denmark , France , the Federal Republic of Germany, Greece, Italy, the Netherlands, Norway , Sweden, Switzerland , the United Kingdom , and Yugoslavia.[11]

Several important achievements in particle physics have been made through experiments at CERN. They include:

In September 2011, CERN attracted media attention when the OPERA Collaboration reported the detection of possibly faster-than-light neutrinos.[19] Further tests showed that the results were flawed due to an incorrectly connected GPS synchronization cable.[20] 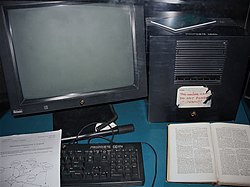 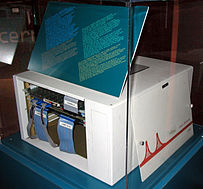 This Cisco Systems router at CERN was one of the first IP routers deployed in Europe. 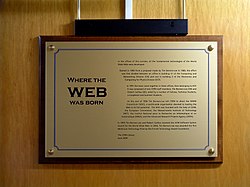 The World Wide Web began as a CERN project named ENQUIRE, initiated by Tim Berners-Lee in 1989 and Robert Cailliau in 1990.[21] Berners-Lee and Cailliau were jointly honoured by the Association for Computing Machinery in 1995 for their contributions to the development of the World Wide Web.

Based on the concept of hypertext, the project was intended to facilitate the sharing of information between researchers. The first website was activated in 1991. On 30 April 1993, CERN announced that the World Wide Web would be free to anyone. A copy[22] of the original first webpage, created by Berners-Lee, is still published on the World Wide Web Consortium's website as a historical document.

Prior to the Web's development, CERN had pioneered the introduction of Internet technology, beginning in the early 1980s.[23]

More recently, CERN has become a facility for the development of grid computing, hosting projects including the Enabling Grids for E-sciencE (EGEE) and LHC Computing Grid. It also hosts the CERN Internet Exchange Point (CIXP), one of the two main internet exchange points in Switzerland.

CERN operates a network of six accelerators and a decelerator. Each machine in the chain increases the energy of particle beams before delivering them to experiments or to the next more powerful accelerator. Currently (as of 2019) active machines are:

Many activities at CERN currently involve operating the Large Hadron Collider (LHC) and the experiments for it. The LHC represents a large-scale, worldwide scientific cooperation project. 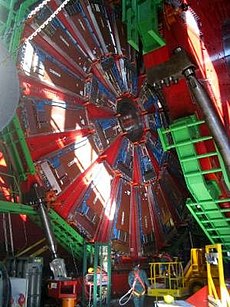 Construction of the CMS detector for LHC at CERN

The LHC tunnel is located 100 metres underground, in the region between the Geneva International Airport and the nearby Jura mountains. The majority of its length is on the French side of the border. It uses the 27 km circumference circular tunnel previously occupied by the Large Electron–Positron Collider (LEP), which was shut down in November 2000. CERN's existing PS/SPS accelerator complexes are used to pre-accelerate protons and lead ions which are then injected into the LHC.

Eight experiments (CMS, ATLAS, LHCb, MoEDAL,[25] TOTEM, LHCf, FASER and ALICE) are located along the collider; each of them studies particle collisions from a different aspect, and with different technologies. Construction for these experiments required an extraordinary engineering effort. For example, a special crane was rented from Belgium to lower pieces of the CMS detector into its cavern, since each piece weighed nearly 2,000 tons. The first of the approximately 5,000 magnets necessary for construction was lowered down a special shaft at 13:00 GMT on 7 March 2005.

The LHC has begun to generate vast quantities of data, which CERN streams to laboratories around the world for distributed processing (making use of a specialized grid infrastructure, the LHC Computing Grid). During April 2005, a trial successfully streamed 600 MB/s to seven different sites across the world.

The initial particle beams were injected into the LHC August 2008.[26] The first beam was circulated through the entire LHC on 10 September 2008,[27] but the system failed 10 days later because of a faulty magnet connection, and it was stopped for repairs on 19 September 2008.

The LHC resumed operation on 20 November 2009 by successfully circulating two beams, each with an energy of 3.5 teraelectronvolts (TeV). The challenge for the engineers was then to try to line up the two beams so that they smashed into each other. This is like "firing two needles across the Atlantic and getting them to hit each other" according to Steve Myers, director for accelerators and technology.

On 30 March 2010, the LHC successfully collided two proton beams with 3.5 TeV of energy per proton, resulting in a 7 TeV collision energy. However, this was just the start of what was needed for the expected discovery of the Higgs boson. When the 7 TeV experimental period ended, the LHC revved to 8 TeV (4 TeV per proton) starting March 2012, and soon began particle collisions at that energy. In July 2012, CERN scientists announced the discovery of a new sub-atomic particle that was later confirmed to be the Higgs boson.[28] In March 2013, CERN announced that the measurements performed on the newly found particle allowed it to conclude that this is a Higgs boson.[29] In early 2013, the LHC was deactivated for a two-year maintenance period, to strengthen the electrical connections between magnets inside the accelerator and for other upgrades.

As of October 2019, the construction is on-going to upgrade the LHC's luminosity in a project called High Luminosity LHC (HL-LHC). This project should see the LHC accelerator upgraded by 2026 to an order of magnitude higher luminosity.

As part of the HL-LHC upgrade project, also other CERN accelerators and their subsystems are receiving upgrades. Among other work, the LINAC 2 linear accelerator injector was decommissioned, to be replaced by a new injector accelerator, the LINAC 4 in 2020. 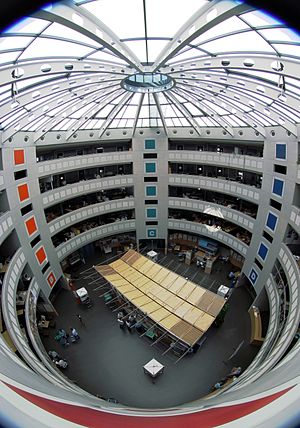 Interior of office building 40 at the Meyrin site. Building 40 hosts many offices for scientists from the CMS and ATLAS collaborations.

The smaller accelerators are on the main Meyrin site (also known as the West Area), which was originally built in Switzerland alongside the French border, but has been extended to span the border since 1965. The French side is under Swiss jurisdiction and there is no obvious border within the site, apart from a line of marker stones.

The SPS and LEP/LHC tunnels are almost entirely outside the main site, and are mostly buried under French farmland and invisible from the surface. However, they have surface sites at various points around them, either as the location of buildings associated with experiments or other facilities needed to operate the colliders such as cryogenic plants and access shafts. The experiments are located at the same underground level as the tunnels at these sites.

Outside of the LEP and LHC experiments, most are officially named and numbered after the site where they were located. For example, NA32 was an experiment looking at the production of so-called "charmed" particles and located at the Prévessin (North Area) site while WA22 used the Big European Bubble Chamber (BEBC) at the Meyrin (West Area) site to examine neutrino interactions. The UA1 and UA2 experiments were considered to be in the Underground Area, i.e. situated underground at sites on the SPS accelerator.

Most of the roads on the CERN Meyrin and Prévessin sites are named after famous physicists, such as Richard Feynman, Niels Bohr, and Albert Einstein.

Since its foundation by 12 members in 1954, CERN regularly accepted new members. All new members have remained in the organization continuously since their accession, except Spain and Yugoslavia. Spain first joined CERN in 1961, withdrew in 1969, and rejoined in 1983. Yugoslavia was a founding member of CERN but quit in 1961. Of the 23 members, Israel joined CERN as a full member on 6 January 2014,[35] becoming the first (and currently only) non-European full member.[36]

The budget contributions of member states are computed based on their GDP.[37]

Non-Member States (with dates of Co-operation Agreements) currently involved in CERN programmes are:[62]

CERN also has scientific contacts with the following countries:[62]

International research institutions, such as CERN, can aid in science diplomacy.[67]

ESO and CERN have a cooperation agreement.[68] 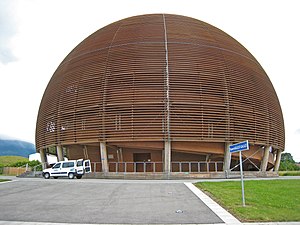 The Globe of Science and Innovation at CERN

Facilities at CERN open to the public include:

The statue of Shiva engaging in the Nataraja dance presented by the Department of Atomic Energy of India . 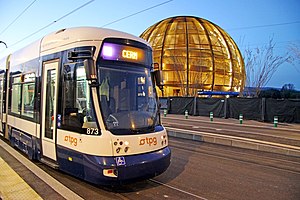