A Faraday cup is a metal (conductive) cup designed to catch charged particles in vacuum. The resulting current can be measured and used to determine the number of ions or electrons hitting the cup.[1] The Faraday cup was named after Michael Faraday who first theorized ions around 1830. 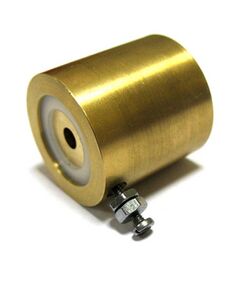 Faraday cup with an electron-suppressor plate in front

When a beam or packet of ions hits the metal, it gains a small net charge while the ions are neutralized.[clarification needed] The metal can then be discharged to measure a small current proportional to the number of impinging ions. The Faraday cup is essentially part of a circuit where ions are the charge carriers in vacuum and it is the interface to the solid metal where electrons act as the charge carriers (as in most circuits). By measuring the electric current (the number of electrons flowing through the circuit per second) in the metal part of the circuit, the number of charges being carried by the ions in the vacuum part of the circuit can be determined. For a continuous beam of ions (each with a single charge), the total number of ions hitting the cup per unit time is

where N is the number of ions observed in a time t (in seconds), I is the measured current (in amperes) and e is the elementary charge (about 1.60 × 10−19 C). Thus, a measured current of one nanoamp (10−9 A) corresponds to about 6 billion ions striking the Faraday cup each second.

Similarly, a Faraday cup can act as a collector for electrons in a vacuum (e.g. from an electron beam). In this case, electrons simply hit the metal plate/cup and a current is produced. Faraday cups are not as sensitive as electron multiplier detectors, but are highly regarded for accuracy because of the direct relation between the measured current and number of ions.

The Faraday cup utilizes a physical principle according to which the electrical charges delivered to the inner surface of a hollow conductor are redistributed around its outer surface due to mutual self-repelling of charges of the same sign – a phenomenon discovered by Faraday.[2]

and from the conventional condition for distribution function normalizing

The counting of charges collected per unit time is impacted by two error sources: 1) the emission of low-energy secondary electrons from the surface struck by the incident charge and 2) backscattering (~180 degree scattering) of the incident particle, which causes it to leave the collecting surface, at least temporarily. Especially with electrons, it is fundamentally impossible to distinguish between a fresh new incident electron and one that has been backscattered or even a fast secondary electron.