The Mars Society is a nonprofit organization that advocates for human Mars exploration and colonization, founded by Robert Zubrin in 1998. It is based on Zubrin's Mars Direct plan, which aims to make human mission to Mars as lightweight and feasible as possible. The Mars Society aims to garner support for the Mars program by lobby the United States and other governments.

Since its founding, the Mars Society has hosted its annual International Mars Society Convention and operated Mars analog habitats, named the Mars Desert Research Station and the Flashline Mars Arctic Research Station. The organization also hosts university robotics competitions, named the University Rover Challenge and the European Rover Challenge. Many Mars Society members and former members are influential in the wider spaceflight community, such as Buzz Aldrin and Elon Musk.

NASA had made technical studies for a human mission to Mars since the early 1960s. Early NASA mission plans are cursory and targeted the launch date in the 1970s, after the end of the Apollo program. When NASA diverted its resources to the Space Shuttle in the 1970s, space advocacy group The Planetary Society sponsored a separate organized Mars mission study. In 1981, the first public conference for Mars exploration was organized and named Case for Mars, by students at the University of Colorado in Boulder. Soon after, an informal network of NASA scientists and engineers emerged, who called themselves the "Mars Underground". NASA briefly made a proposal for a human Mars mission in the 1980s in its Space Exploration Initiative, which produced a three-decade plan that costed between $250 to $500 billion. The cost is a main contributor to the initiative's eventual cancellation.[1]

In early 1990, Martin Marietta engineers Robert Zubrin and David Baker announced their Mars Direct plan to NASA and the public. The plan starts with the launch of a Shuttle-derived vehicle, carrying a propellant factory and an Earth-return vehicle to Mars. Landed eight months later, the factory produces methane propellant from stored hydrogen, using a small nuclear reactor. Two years later at the next Mars launch window, two launch vehicles, one carrying crew and habitat, and the other carrying another factory and Earth-return vehicle for the next mission.[2] The plan uses existing technologies and eliminate the need for space rendezvous or precursor space station. A modified Mars Direct plan for NASA is priced at $20 billion, one-twentieth of the Mars plan in NASA's Space Exploration Initiative.[3]

Five more Case for Mars conferences took place since its first, ending in 1996.[1] In the same year, Zubrin published The Case For Mars,[4] which proposed a Mars exploration mission, gave philosophical arguments for it and rebutted criticisms.[5] The book's reception is positive, with four thousand mails and emails sent to Zubrin by readers. On 13 August 1998, the Mars Society was founded in its first conference in Boulder, Colorado, which took place for four days and attended by 750 people. Some of the invited attendees were from the Mars Underground and those written to Zubrin about The Case For Mars. The Mars Society's founding conference emphasize its focus at the Mars Direct plan and efforts of lobbying the government,[4] holding that there is no technical reason that would prevent a human mission to Mars within a decade.[5] 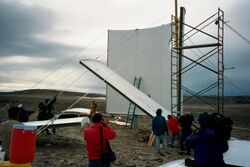 The first Mars analog facility of the Mars Society is the Flashline Mars Arctic Research Station (FMARS) on the Devon Island. The FMARS is the second Mars analog facility in the world; the first one is the Haughton–Mars Project, which contributed to FMARS's funding.[6] Part of the funding also came from various businesses, such as the Discovery Channel.[7] It was first occupied in July and August 2000,[8](pp98–99) and started the first simulated mission in 2001.[7] In December that year, the MDRS's construction in Hanksville, Utah[9](p4) was completed.[6]

In mid-2001, the Mars Society received a $5000 check from Elon Musk for a fundraiser event. Zubrin took notice and invited Musk for coffee. There, he talked about the Flashline Mars Arctic Research Station and the Translife Mission which included experiments where a spinning capsule would subject mice to Martian gravity. After briefly researching about Mars concepts and missions, Musk joined the Mars Society's board of directors and gave it $100,000.[10] The money was to be used on the next Mars analog habitat, called the Mars Desert Research Station (MDRS).[11] He left the Mars Society shortly after, wanting to do a Mars-related publicity stunt mission on his own. In April 2002, Musk abandoned the project and founded SpaceX, inviting aerospace engineers that he had met beforehand.[10]

From 2001 to 2005 Mars mission simulations at FMARS are usually 2–8 weeks long by ten rotated crews, in batch of 6–7 people. The first four-month-long mock mission was done in early 2007, revealing collaboration issues between the crews. Shorter missions were done in 2009 and 2013, before another long-duration mission called Mars 160 was conducted in 2017, in collaboration with the MDRS. The crew would stay for eighty days in MDRS before being transferred to FMARS, rotating the crew for every month.[8](pp99,101) As of April 2020, the MDRS has hosted nineteen Mars mission simulations, totaling 236 crews in 6–7 people batches in missions lasting from 1–2 weeks.[8](p101) 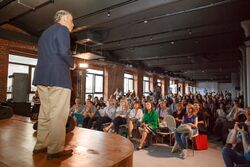 Zubrin at the 2016 TEDxMoscow conference presenting about Mars exploration

The Mars Society's aims are testing plans of a human mission to Mars on Earth, lobbying governments[7] and garnering public support for such a Mars mission.[12] It is a member of the Alliance for Space Development, a space advocacy organization for promoting space colonization.[13] The Mars Society's founder and president is Robert Zubrin. Notable members and former members of the organization include Buzz Aldrin,[14] Elon Musk,[10] Gregory Benford,[14] and Peter Smith.[15]

The main project of the Mars Society is the Mars Analog Research Station Program, detailed below. It also organizes annual Mars conventions[16] and the University Rover Challenge, where student teams complete robotic tasks related to Mars exploration, within a budget.[17] In collaboration with a virtual reality company,[18] MarsVR aims to simulate the MDRS for crew training; the exploration portion of the software can be brought by the public.[19] The software can also simulate playing sports on Mars, such as soccer and mountaineering.[18]

The Mars Analog Research Station Program studies the technical and human factors of a Mars mission, via its two Mars analog habitats: the FMARS and the MDRS. The FMARS is located on the Devon Island in Canada and near the Haughton impact crater,[8](pp98,101) above the 75th parallel north where the island is not inhabited and vegetated. The MDRS is located in Hanksville, Utah, where the habitat is isolated from civilization. Both stations' location are chosen for its similarities to Mars,[9](p4) and are closed to public visits.[5] 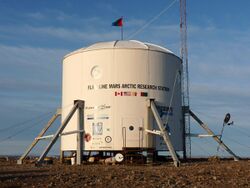 Both stations originally have the same basic design:[8](p104) a two-level habitat module 8 m (26 ft) in diameter. The habitat's lower level has a bathroom, laboratory, two airlocks, an extravehicular activity preparation area and stores various engineering equipment; at the top, the habitat's upper level has six sleeping quarters for each crew, a common area, computing area and galley (kitcken). The loft level above the sleeping quarter is used for storage.[9](p3)

Later on, there were drastic differences between the FMARS and MDRS, due to FMARS's more isolated location and MDRS's more continuous use, maintenance and expansion. The FMARS also needs to withstand the extreme wind and temperature in the Arctic. A participant of Mars 160 described the FMARS as more structurally sound, though more deteriorated due to dry rot and molds. Many equipment were broken because of poor maintenance, and the FMARS's power and internet access was limited to a few hours per day.[8](pp104–105)

The FMARS is a monocoque mostly made out of double-skinned wood panels. The habitat is stabilized by ground trusses and steel guy-wires, making the FMARS more stable than MDRS in high wind. The lower desk has more but smaller rooms, and the doors in the FMARS are square and tall. A ladder connects both floors together. The galley's and ladder's position are swapped compared to the MDRS, as well as the toilet and bathroom. The upper deck's shared space is used for both computing and dining, and the galley consists of a stove, microwave, and a water container. The crew quarter's rooms have staggered bunk beds and are not equal in volume. A nearby river a few hundred meters away provides freshwater, and a gas generator provides electricity.[8](pp98–100)

The Mars Desert Research Station with all of its modules, 2020

The MDRS is expanded from the two-level habitat (called Hab) to include a greenhouse (GreenHab), solar observatory (Musk Observatory), a science building (Science Dome), an engineering pod (RAM), and a robotic observatory.[8](p103) The Musk Observatory is named after Elon Musk, who donated $100,000 to the MDRS.[11] Except for the pod, the modules are connected via tunnels. At the habitat, the lower deck is used for science and engineering activities. Like the FMARS, it has a shower and toilet, a biology and geology laboratory, two simulated airlocks, an extravehicular activity preparation area, and storage space. The upper deck is used for social activities, dining and communications, and has seven separate crew quarters. In the loft area, a tank stores freshwater and a hatch is used for maintaining antenna and weather instruments. Water for flushing the toilet is provided by the greenhouse, and electricity is provided by batteries under the habitat.[8](pp103–104)

Additional analog stations were planned, named the European Mars Analog Research Station (Euro-MARS) and Australia Mars Analog Research Station (MARS Oz). The Euro-MARS was operated by the Mars Society's European chapter and was to feature three decks and more extensive facilities. However, during transport from the United Kingdom to its deployment location in Krafla, Iceland, the Euro-MARS was damaged and as of 2017 is back at the planning phase. The MARS Oz is also in the planning phase by the Australian Mars Society and replicate a spacecraft launching directly from the Earth's surface. It would feature a mock propulsion module, heat shield and landing engines, and deployed at Arkaroola, South Australia.[20] 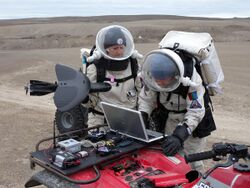 Two FMARS crew members operating an UAV, with equipment placed on top of the rover

With a few safety exceptions, crew outside the habitat must wear mock space suits.[9](p3) All food and supplies are at the habitat or being supplied by the crew, and there is no resupplying while a mission is in progress. Because there are very few spare parts on-site, crews must be able to repair broken equipment themselves. To simulate Earth–Mars six- to forty-minutes communication delay, a twenty-minute lag time is usually added for crew communication with the mission support team.[9](p12) Therefore, crews cannot rely on real-time assistance and must be able to perform tasks by themselves.[9](p13)

Each batch of habitat crew has a mission commander, an executive officer, and various scientists and engineers,[9](p12) assisted by a mission support team. The crew are responsible for mission planning and task prioritizing, as well as writing a daily summary report.[9](p13) The crew member must also perform a research study, which is reviewed beforehand by an ethics committee. Over 1400 studies have been performed at the MDRS, more than any other Mars analog habitats. The impact of crew composition, such as gender and cultural factors, has been studied at the station. However, due to the short duration of the MDRS missions, studies of a Mars mission's habitability impact have been limited.[8](p104)