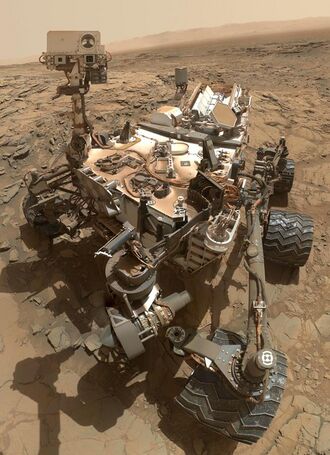 A Mars rover is a motor vehicle designed to travel on the surface of Mars. Rovers have several advantages over stationary landers: they examine more territory, they can be directed to interesting features, they can place themselves in sunny positions to weather winter months, and they can advance the knowledge of how to perform very remote robotic vehicle control. They serve a different purpose than orbital spacecraft like Mars Reconnaissance Orbiter. A more recent development is the Mars helicopter.

On January 24, 2016, NASA reported that then current studies on Mars by Opportunity and Curiosity would be searching for evidence of ancient life, including a biosphere based on autotrophic, chemotrophic or chemolithoautotrophic microorganisms, as well as ancient water, including fluvio-lacustrine environments (plains related to ancient rivers or lakes) that may have been habitable.[1][2][3][4][5] The search for evidence of habitability, taphonomy (related to fossils), and organic carbon on Mars is now a primary NASA objective.[1][6]

The Soviet probes, Mars 2 and Mars 3, were physically tethered probes; Sojourner was dependent on the Mars Pathfinder base station for communication with Earth; Opportunity, Spirit and Curiosity were on their own. As of November 2022, Curiosity is still active, while Spirit, Opportunity, and Sojourner completed their missions before losing contact. On February 18, 2021, Perseverance, the newest American Mars rover, successfully landed. On May 14, 2021, China's Zhurong became the first non-American rover to successfully operate on Mars.

Multiple rovers have been dispatched to Mars: 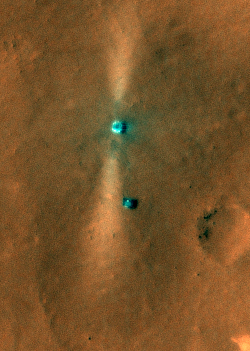 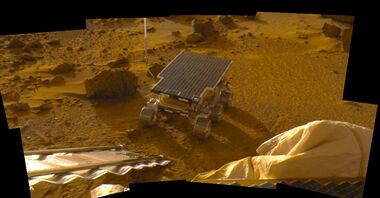 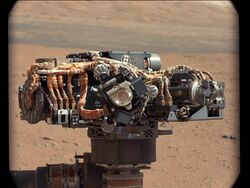 Curiosity's (MSL) rover "hand" featuring a suite of instruments on a rotating "wrist". Mount Sharp is in the background (September 8, 2012). 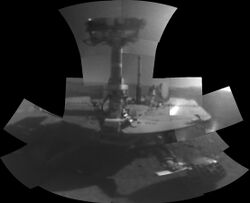 Opportunity's first self-portrait including the camera mast on Mars
(February 14−20, 2018 / sols 4998−5004). It was taken with its microscopic imager instrument.

Examples of instruments onboard landed rovers include: 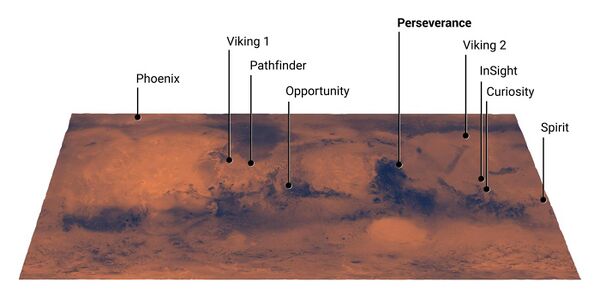 Circa the 2010s, NASA had established certain goals for the rover program.

NASA distinguishes between "mission" objectives and "science" objectives. Mission objectives are related to progress in space technology and development processes. Science objectives are met by the instruments during their mission in space.

The science instruments are chosen and designed based on the science objectives and goals. The primary goal of the Spirit and Opportunity rovers was to investigate "the history of water on Mars".[34]

Panorama of Husband Hill taken by the Spirit rover (November 2005)

Opportunity rover later visited its heat shield impact site; it was ejected during the rover's descent and impacted the surface separately. 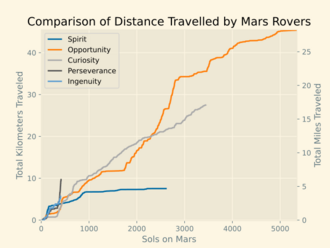 Comparison of the distances travelled by various Mars rovers