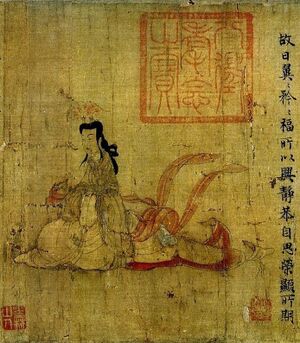 This next to last scene of the Admonitions Scroll shows a palace lady sitting in quiet contemplation, presumably following the admonitions in the accompanying lines:[1] "Therefore I say: Be cautious and circumspect in all you do, and from this, good fortune will arise. Calmly and respectfully think about your actions, and honor and fame will await you."

Template:Self sidebarSelf-reflection is the ability to witness and evaluate our own cognitive, emotional, and behavioural processes. In psychology, other terms used for this self-observation include 'reflective awareness', and 'reflective consciousness', which originate from the work of William James.[2][3]

Self-reflection depends upon a range of functions, including introspection and metacognition, which develop from infancy through adolescence, affecting how individuals interact with others, and make decisions.[4]

The concept of self-reflection is ancient. For example, more than 3,000 years ago, "Know thyself", an ancient maxim by the Delphic oracle, Pythia, was inscribed on the forecourt of the Temple of Apollo when it was built over one of the oldest known religious sites in Ancient Greece. It is also considered a form of thought that generates new meaning[5] and an opportunity to engage with what seemingly appears incongruous.[6]

Notions about the status of humanity may be revealed by the etymology of ancient words for humans. Latin homo (PIE *dʰǵʰm̥mō) means "of the earth, earthling", probably in opposition to "celestial" beings. Greek ἂνθρωπος (mycenaean *Anthropos) means "low-eyed", again probably contrasting with a divine perspective.

From the third-millennium Old Kingdom of Egypt, belief in an eternal afterlife of the human ka is documented along with the notion that the actions of a person would be assessed to determine the quality of that existence. A claim of dominance of humanity alongside radical pessimism because of the frailty and brevity of human life is asserted in the Hebrew Bible Genesis 1:28, where dominion of humans is promised, but contrarily, the author of Ecclesiastes, bewails the vanity of all human effort.

Protagoras made the famous claim that humans are "the measure of all things; of what is, that it is; of what is not, that it is not". Socrates advocated the ancient adage for all humans to "Know thyself", and gave the (doubtlessly tongue-in-cheek) definition of humans as, "featherless bipeds" (Plato, Politicus). Aristotle described humans as the "communal animal" (ζῶον πολιτικόν), i.e., emphasizing society-building as a central trait of human nature, and being a "thought bearer animal" (ζῶον λόγον ἔχον, animal rationale), a term that also may have inspired the species taxonomy, Homo sapiens.

The dominant world-view of medieval Europe, as directed by the Catholic Church, was that human existence is essentially good and created in "original grace", but because of concupiscence, is marred by sin, and that its aim should be to focus on a beatific vision after death. The thirteenth century pope Innocent III wrote about the essential misery of earthly existence in his "On the misery of the human condition"—a view that was disputed by, for example, Giannozzo Manetti in his treatise "On human dignity".

What a piece of work is a man! How noble in reason! how infinite in faculties! in form and moving, how express and admirable! in action how like an angel! in apprehension, how like a god! the beauty of the world! the paragon of animals! And yet, to me, what is this quintessence of dust? 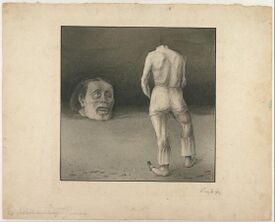 René Descartes famously and succinctly proposed: Cogito ergo sum[7] (French: "Je pense donc je suis"; English: "I think, therefore I am"), not an assessment of humanity, but certainly reflecting a capacity for reasoning as a characteristic of humans, that potentially, could include individual self-reflection.

The Enlightenment was driven by a renewed conviction, that, in the words of Immanuel Kant, "Man is distinguished above all animals by his self-consciousness, by which he is a 'rational animal'." In conscious opposition to this tradition during the nineteenth century, Karl Marx defined humans as a "labouring animal" (animal laborans). In the early twentieth century, Sigmund Freud dealt a serious blow to positivism by postulating that, to a large part, human behaviour is controlled by the unconscious mind. Joseph Conrad uses the analogy of chemistry to describe how the tiniest idea can stimulate a person during reflection like a "little drop precipitating the process of crystallization in a test tube containing a colourless solution".[8]

Self-reflection is a process of communicating internally with oneself. When one takes time to think about their character or behavior, they analyze the reasons that caused the behavior, where this comes from, what the outcome of the behavior means to them, is it effective for them and what they can do about it. Individuals process this information about themselves to help them find methods to deal with the information gained during the self-reflection process and applying this information to future behavior has been shown to elicit strength and joy.[9]

First, self-reflection fortifies an individual’s emotional stability. When setting aside some effort to self-reflect they are looking inwards. This assists with building two parts to their emotional intelligence:[10] self-awareness and self-concept. Self-awareness enables a person to comprehend their feelings, qualities, shortcomings, drives, and objectives, and recognize their effect on others. Self-concept includes the capacity to control or divert their troublesome feelings and motivations and adjust to changing circumstances. Building these skills will improve both their personal and professional life.

Second, self-reflection enhances a person’s self-esteem and gives transparency for decision-making. Self-esteem is significant for dealing with a filled, complex life that incorporates meetings, vocation, family, network, and self-necessities. It helps in decision-making, effective communication, and building influence. The more they think about their qualities and how they can grow them the more confident they will be later on. A person may become happy with their good qualities and identify the ones that require growth.

Third, the self-reflection process requires honesty of the individual in order to be effective. When a person is honest with themselves when self-reflecting, they are able to understand their experiences; this person can grow and makes changes based on what they have learned and lead them to better choices.

Fourth, self-reflection adapts a person’s actions in future situations. Making time to step back and consider their behaviors, the consequences of those behaviors, and the expectations of those behaviors can give them a source of a clear insight and learning.[11] A person engaging in self-reflection may ask themselves: What appeared to have a more remarkable impact? How can we accomplish a greater amount of that and enhance it? This cycle of reflection and variation—before, during, after actions—is regularly a recognized part of the process.

A study involving clients in a twelve-step program explored the role of self‑reflection through diary writing, not only as daily therapy, but in a retrospective context. The study concluded that clients who read and reflected on their past diary entries demonstrated increased participation in the treatment program.[12] The twelve-step program is based on self reflection and the accountability of actions past. The article by Mitchell Friedman indicates that success in one's recovery relies on self-reflection.[13]