A smear campaign, also referred to as a smear tactic or simply a smear, is an effort to damage or call into question someone's reputation, by propounding negative propaganda.[1] It makes use of discrediting tactics.

It can be applied to individuals or groups. Common targets are public officials, politicians, political candidates, activists and ex-spouses. The term also applies in other contexts such as the workplace.[2]

A smear campaign is an intentional, premeditated effort to undermine an individual's or group's reputation, credibility, and character. Like negative campaigning, most often smear campaigns target government officials, politicians, political candidates, and other public figures. However, private persons or groups may also become targets of smear campaigns perpetrated in companies, institutions, the legal system, and other formal groups. Discrediting tactics are used to discourage people from believing in the figure or supporting their cause, such as the use of damaging quotations.

Smear tactics differ from normal discourse or debate in that they do not bear upon the issues or arguments in question. A smear is a simple attempt to malign a group or an individual with the aim of undermining their credibility.

Smears often consist of ad hominem attacks in the form of unverifiable rumors and distortions, half-truths, or even outright lies; smear campaigns are often propagated by gossip magazines. Even when the facts behind a smear campaign are demonstrated to lack proper foundation, the tactic is often effective because the target's reputation is tarnished before the truth is known.

Smear campaigns can also be used as a campaign tactic associated with tabloid journalism, which is a type of journalism that presents little well-researched news and instead uses eye-catching headlines, scandal-mongering and sensationalism. For example, during Gary Hart's 1988 presidential campaign (see below), the New York Post reported on its front page big, black block letters: "GARY: I'M NO WOMANIZER."[4][5]

Smears are also effective in diverting attention away from the matter in question and onto a specific individual or group. The target of the smear typically must focus on correcting the false information rather than on the original issue.

Deflection has been described as a wrap-up smear: "You make up something. Then you have the press write about it. And then you say, everybody is writing about this charge".[6]

Political debate often abuses public confidence by one candidate attempting to sway voters, not by logical argument on given issues, but by personal diatribe that does not directly bear on the matter at hand.

Accusations of adultery in America date back to the 19th century. One famous example of this was the 1884 presidential campaign, in which Grover Cleveland's opponents accused him of having fathered an illegitimate child. A political catchphrase by his opponents was "Ma, ma, where's my pa?" After Cleveland was elected, his supporters mockingly added, "Gone to the White House, ha, ha, ha." Cleveland's defeat of his chief opponent, James G. Blaine, may have been helped by another discrediting tactic used against him which seriously backfired, namely the assertion that Cleveland's party was that of "Rum, Romanism, and Rebellion" (the latter two referring to Roman Catholicism and the American Civil War). Cleveland's campaign also used the slogan, "Blaine, Blaine, James G. Blaine, The Continental Liar from the State of Maine" in reference to Blaine's discredited railroad deals.

Discrediting tactics are not just used against each other by opponents for office in democratic countries, but are also used in wartime between countries. In the middle of the 20th century, Soviet and United Kingdom propaganda made popular the idea that Adolf Hitler had only one testicle (and was thereby less of a man).

American politics draws a line between "mud slinging" and defamation. The key issue is that mud slinging is not a form of perjury or libel. Politics also can include barratry where one opponent files frivolous litigation against the other, specifically to injure the opponent's reputation even though the case is groundless and may later be dismissed. By the time these facts can come to light, the voters have cast their ballots.

In the U.S. judicial system, discrediting tactics (called witness impeachment) are the approved method for attacking the credibility of any witness in court, including a plaintiff or defendant. In cases with significant mass media attention or high-stakes outcomes, those tactics often take place in public as well.

Logically, an argument is held in discredit if the underlying premise is found, "So severely in error that there is cause to remove the argument from the proceedings because of its prejudicial context and application...". Mistrial proceedings in civil and criminal courts do not always require that an argument brought by defense or prosecution be discredited, however appellate courts must consider the context and may discredit testimony as perjurious or prejudicial, even if the statement is technically true.

Smear campaigns are considered by many to be a low, disingenuous form of discourse; they have been identified as a common weapon of psychopaths,[2][7] borderlines, and narcissists.[8][9][10] 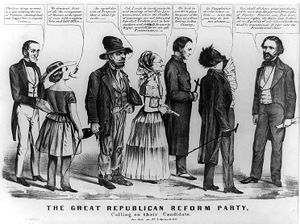 "The Great Republican Reform Party Calling on their Candidate", an 1856 political cartoon in which various "extremists", including a Catholic, press John C. Frémont, the first Republican party candidate for president of the United States, for their respective causes. There was a political campaign smear rumor current in 1856 that Fremont was a Catholic.

During the 1856 presidential election, John C. Frémont was the target of a smear campaign alleging that he was a Catholic. The campaign was designed to undermine support for Fremont from those who were suspicious of Catholics.

Ralph Nader was the victim of a smear campaign during the 1960s, when he was campaigning for car safety. In order to smear Nader and deflect public attention from his campaign, General Motors engaged private investigators to search for damaging or embarrassing incidents from his past. In early March 1966, several media outlets, including The New Republic and The New York Times, reported that GM had tried to discredit Nader, hiring private detectives to tap his phones and investigate his past and hiring prostitutes to trap him in compromising situations.[11][12] Nader sued the company for invasion of privacy and settled the case for $284,000. Nader's lawsuit against GM was ultimately decided by the New York Court of Appeals, whose opinion in the case expanded tort law to cover "overzealous surveillance."[13] Nader used the proceeds from the lawsuit to start the pro-consumer Center for Study of Responsive Law.

Gary Hart was the target of a smear campaign during the 1988 US presidential campaign. The New York Post once reported on its front page big, black block letters: "GARY: I'M NO WOMANIZER."[4][5]

In 2011, China launched a smear campaign against Apple, including TV and radio advertisements and articles in state-run papers. The campaign failed to turn the Chinese public against the company and its products.[14]

Spiritual leader Sathya Sai Baba was accused of fraud, sexual abuse and other misconduct.[15] Baba described the allegations as a "smear campaign". He never faced any investigation and the critics were criticized for lacking any proof against him.[16]

The allegations against Julian Assange have been labelled by Australian journalist John Pilger as a smear campaign.[17][18]

In 2016, Brad Pitt was the target of a smear campaign related to his child custody dispute. Pitt was alleged to have acted inappropriately during an argument with his 15-year-old son.[19]

Chris Bryant, a British parliamentarian, accused Russia in 2012 of orchestrating a smear campaign against him because of his criticism of Vladimir Putin.[20] In 2017 he alleged that other British officials are vulnerable to Russian smear campaigns.[21][22]

In January 2007, it was revealed that an anonymous website that attacked critics of Overstock.com, including media figures and private citizens on message boards, was operated by an official of Overstock.com.[23][24][25]

Countries, particularly those outside the Western hemisphere, have accused Western powers of smear campaigns to bring down their governments. Gambia accused the United States and Britain of backing "so-called Gambians to set up organisations and media facilities to spread nothing but lies against The Gambia by making false, outrageous and unfounded statements about the state of human rights."[26]