Short description: Rest mass of an atom in its ground state 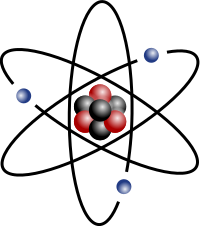 The atomic mass (ma or m) is the mass of an atom. Although the SI unit of mass is the kilogram (symbol: kg), atomic mass is often expressed in the non-SI unit atomic mass unit (amu) or unified mass (u) or dalton (symbol: Da), where 1 amu or 1 u or 1 Da is defined as ​1⁄12 of the mass of a single carbon-12 atom, at rest.[1] The protons and neutrons of the nucleus account for nearly all of the total mass of atoms, with the electrons and nuclear binding energy making minor contributions. Thus, the numeric value of the atomic mass when expressed in daltons has nearly the same value as the mass number. Conversion between mass in kilograms and mass in daltons can be done using the atomic mass constant [math]\displaystyle{ m_{\rm{u}}= {{m({\rm{^{12}C}})} \over {12}} = 1\ \rm {Da} }[/math].

The formula used for conversion is:[2][3]

The atomic mass of atoms, ions, or atomic nuclei is slightly less than the sum of the masses of their constituent protons, neutrons, and electrons, due to binding energy mass loss (per E = mc2).

Relative isotopic mass (a property of a single atom) is not to be confused with the averaged quantity atomic weight (see above), that is an average of values for many atoms in a given sample of a chemical element.

As is the case for the related atomic mass when expressed in daltons, the relative isotopic mass numbers of nuclides other than carbon-12 are not whole numbers, but are always close to whole numbers. This is discussed fully below.

In the case of many elements that have one naturally occurring isotope (mononuclidic elements) or one dominant isotope, the difference between the atomic mass of the most common isotope, and the (standard) relative atomic mass or (standard) atomic weight can be small or even nil, and does not affect most bulk calculations. However, such an error can exist and even be important when considering individual atoms for elements that are not mononuclidic.

Relative isotopic masses are always close to whole-number values, but never (except in the case of carbon-12) exactly a whole number, for two reasons:

Any mass defect due to nuclear binding energy is experimentally a small fraction (less than 1%) of the mass of an equal number of free nucleons. When compared to the average mass per nucleon in carbon-12, which is moderately strongly-bound compared with other atoms, the mass defect of binding for most atoms is an even smaller fraction of a dalton (unified atomic mass unit, based on carbon-12). Since free protons and neutrons differ from each other in mass by a small fraction of a dalton (1.38844933(49)×10−3 Da),[8] rounding the relative isotopic mass, or the atomic mass of any given nuclide given in daltons to the nearest whole number, always gives the nucleon count, or mass number. Additionally, the neutron count (neutron number) may then be derived by subtracting the number of protons (atomic number) from the mass number (nucleon count). 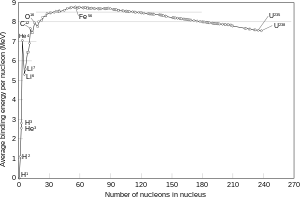 Binding energy per nucleon of common isotopes. A graph of the ratio of mass number to atomic mass would be similar.

The amount that the ratio of atomic masses to mass number deviates from 1 is as follows: the deviation starts positive at hydrogen-1, then decreases until it reaches a local minimum at helium-4. Isotopes of lithium, beryllium, and boron are less strongly bound than helium, as shown by their increasing mass-to-mass number ratios.

At carbon, the ratio of mass (in daltons) to mass number is defined as 1, and after carbon it becomes less than one until a minimum is reached at iron-56 (with only slightly higher values for iron-58 and nickel-62), then increases to positive values in the heavy isotopes, with increasing atomic number. This corresponds to the fact that nuclear fission in an element heavier than zirconium produces energy, and fission in any element lighter than niobium requires energy. On the other hand, nuclear fusion of two atoms of an element lighter than scandium (except for helium) produces energy, whereas fusion in elements heavier than calcium requires energy. The fusion of two atoms of 4He yielding beryllium-8 would require energy, and the beryllium would quickly fall apart again. 4He can fuse with tritium (3H) or with 3He; these processes occurred during Big Bang nucleosynthesis. The formation of elements with more than seven nucleons requires the fusion of three atoms of 4He in the triple alpha process, skipping over lithium, beryllium, and boron to produce carbon-12.

Here are some values of the ratio of atomic mass to mass number:[9]

Direct comparison and measurement of the masses of atoms is achieved with mass spectrometry.

Relationship between atomic and molecular masses

Similar definitions apply to molecules. One can calculate the molecular mass of a compound by adding the atomic masses (not the standard atomic weights) of its constituent atoms. Conversely, the molar mass is usually computed from the standard atomic weights (not the atomic or nuclide masses). Thus, molecular mass and molar mass differ slightly in numerical value and represent different concepts. Molecular mass is the mass of a molecule, which is the sum of its constituent atomic masses. Molar mass is an average of the masses of the constituent molecules in a chemically pure but isotopically heterogeneous ensemble. In both cases, the multiplicity of the atoms (the number of times it occurs) must be taken into account, usually by multiplication of each unique mass by its multiplicity.

The first scientists to determine relative atomic masses were John Dalton and Thomas Thomson between 1803 and 1805 and Jöns Jakob Berzelius between 1808 and 1826. Relative atomic mass (Atomic weight) was originally defined relative to that of the lightest element, hydrogen, which was taken as 1.00, and in the 1820s, Prout's hypothesis stated that atomic masses of all elements would prove to be exact multiples of that of hydrogen. Berzelius, however, soon proved that this was not even approximately true, and for some elements, such as chlorine, relative atomic mass, at about 35.5, falls almost exactly halfway between two integral multiples of that of hydrogen. Still later, this was shown to be largely due to a mix of isotopes, and that the atomic masses of pure isotopes, or nuclides, are multiples of the hydrogen mass, to within about 1%.

In the 20th century, until the 1960s, chemists and physicists used two different atomic-mass scales. The chemists used a "atomic mass unit" (amu) scale such that the natural mixture of oxygen isotopes had an atomic mass 16, while the physicists assigned the same number 16 to only the atomic mass of the most common oxygen isotope (16O, containing eight protons and eight neutrons). However, because oxygen-17 and oxygen-18 are also present in natural oxygen this led to two different tables of atomic mass. The unified scale based on carbon-12, 12C, met the physicists' need to base the scale on a pure isotope, while being numerically close to the chemists' scale. This was adopted as the 'unified atomic mass unit'. The current International System of Units (SI) primary recommendation for the name of this unit is the dalton and symbol 'Da'. The name 'unified atomic mass unit' and symbol 'u' are recognized names and symbols for the same unit.[11]

The term atomic weight is being phased out slowly and being replaced by relative atomic mass, in most current usage. This shift in nomenclature reaches back to the 1960s and has been the source of much debate in the scientific community, which was triggered by the adoption of the unified atomic mass unit and the realization that weight was in some ways an inappropriate term. The argument for keeping the term "atomic weight" was primarily that it was a well understood term to those in the field, that the term "atomic mass" was already in use (as it is currently defined) and that the term "relative atomic mass" might be easily confused with relative isotopic mass (the mass of a single atom of a given nuclide, expressed dimensionlessly relative to 1/12 of the mass of carbon-12; see section above).