Atomic force microscopy (AFM) image of a PTCDA molecule, in which the five six-carbon rings are visible.[1] 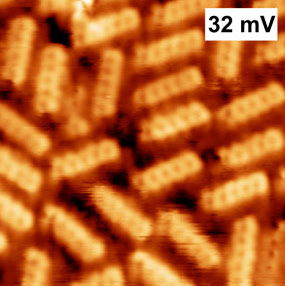 AFM image of 1,5,9-trioxo-13-azatriangulene and its chemical structure.[3]

A molecule is a group of two or more atoms held together by attractive forces known as chemical bonds; depending on context, the term may or may not include ions which satisfy this criterion.[4][5][6][7][8] In quantum physics, organic chemistry, and biochemistry, the distinction from ions is dropped and molecule is often used when referring to polyatomic ions.

In the kinetic theory of gases, the term molecule is often used for any gaseous particle regardless of its composition. This relaxes the requirement that a molecule contains two or more atoms, since the noble gases are individual atoms.[9]

A molecule may be homonuclear, that is, it consists of atoms of one chemical element, e.g. two atoms in the oxygen molecule (O2); or it may be heteronuclear, a chemical compound composed of more than one element, e.g. water (two hydrogen atoms and one oxygen atom; H2O).

Atoms and complexes connected by non-covalent interactions, such as hydrogen bonds or ionic bonds, are typically not considered single molecules.[10]

Molecules as components of matter are common. They also make up most of the oceans and atmosphere. Most organic substances are molecules. The substances of life are molecules, e.g. proteins, the amino acids of which they are composed, the nucleic acids (DNA and RNA), sugars, carbohydrates, fats, and vitamins. The nutrient minerals are generally ionic compounds, thus they are not molecules, e.g. iron sulfate.

However, the majority of familiar solid substances on Earth are made partly or completely of crystals or ionic compounds, which are not made of molecules. These include all of the minerals that make up the substance of the Earth, sand, clay, pebbles, rocks, boulders, bedrock, the molten interior, and the core of the Earth. All of these contain many chemical bonds, but are not made of identifiable molecules.

No typical molecule can be defined for salts nor for covalent crystals, although these are often composed of repeating unit cells that extend either in a plane, e.g. graphene; or three-dimensionally e.g. diamond, quartz, sodium chloride. The theme of repeated unit-cellular-structure also holds for most metals which are condensed phases with metallic bonding. Thus solid metals are not made of molecules.

In glasses, which are solids that exist in a vitreous disordered state, the atoms are held together by chemical bonds with no presence of any definable molecule, nor any of the regularity of repeating unit-cellular-structure that characterizes salts, covalent crystals, and metals.

The science of molecules is called molecular chemistry or molecular physics, depending on whether the focus is on chemistry or physics. Molecular chemistry deals with the laws governing the interaction between molecules that results in the formation and breakage of chemical bonds, while molecular physics deals with the laws governing their structure and properties. In practice, however, this distinction is vague. In molecular sciences, a molecule consists of a stable system (bound state) composed of two or more atoms. Polyatomic ions may sometimes be usefully thought of as electrically charged molecules. The term unstable molecule is used for very reactive species, i.e., short-lived assemblies (resonances) of electrons and nuclei, such as radicals, molecular ions, Rydberg molecules, transition states, van der Waals complexes, or systems of colliding atoms as in Bose–Einstein condensate.

According to Merriam-Webster and the Online Etymology Dictionary, the word "molecule" derives from the Latin "moles" or small unit of mass.

The definition of the molecule has evolved as knowledge of the structure of molecules has increased. Earlier definitions were less precise, defining molecules as the smallest particles of pure chemical substances that still retain their composition and chemical properties.[13] This definition often breaks down since many substances in ordinary experience, such as rocks, salts, and metals, are composed of large crystalline networks of chemically bonded atoms or ions, but are not made of discrete molecules.

Molecules are generally held together by covalent bonding. Several non-metallic elements exist only as molecules in the environment either in compounds or as homonuclear molecules, not as free atoms: for example, hydrogen.

While some people say a metallic crystal can be considered a single giant molecule held together by metallic bonding,[14] others point out that metals behave very differently than molecules.[15]

Sodium and fluorine undergoing a redox reaction to form sodium fluoride. Sodium loses its outer electron to give it a stable electron configuration, and this electron enters the fluorine atom exothermically.

Ionic bonding is a type of chemical bond that involves the electrostatic attraction between oppositely charged ions, and is the primary interaction occurring in ionic compounds. The ions are atoms that have lost one or more electrons (termed cations) and atoms that have gained one or more electrons (termed anions).[17] This transfer of electrons is termed electrovalence in contrast to covalence. In the simplest case, the cation is a metal atom and the anion is a nonmetal atom, but these ions can be of a more complicated nature, e.g. molecular ions like NH4+ or SO42−. At normal temperatures and pressures, ionic bonding mostly creates solids (or occasionally liquids) without separate identifiable molecules, but the vaporization/sublimation of such materials does produce separate molecules where electrons are still transferred fully enough for the bonds to be considered ionic rather than covalent.

Most molecules are far too small to be seen with the naked eye, although molecules of many polymers can reach macroscopic sizes, including biopolymers such as DNA. Molecules commonly used as building blocks for organic synthesis have a dimension of a few angstroms (Å) to several dozen Å, or around one billionth of a meter. Single molecules cannot usually be observed by light (as noted above), but small molecules and even the outlines of individual atoms may be traced in some circumstances by use of an atomic force microscope. Some of the largest molecules are macromolecules or supermolecules.

Effective molecular radius is the size a molecule displays in solution.[19][20] The table of permselectivity for different substances contains examples.

The chemical formula for a molecule uses one line of chemical element symbols, numbers, and sometimes also other symbols, such as parentheses, dashes, brackets, and plus (+) and minus (−) signs. These are limited to one typographic line of symbols, which may include subscripts and superscripts.

A compound's empirical formula is a very simple type of chemical formula.[21] It is the simplest integer ratio of the chemical elements that constitute it.[22] For example, water is always composed of a 2:1 ratio of hydrogen to oxygen atoms, and ethanol (ethyl alcohol) is always composed of carbon, hydrogen, and oxygen in a 2:6:1 ratio. However, this does not determine the kind of molecule uniquely – dimethyl ether has the same ratios as ethanol, for instance. Molecules with the same atoms in different arrangements are called isomers. Also carbohydrates, for example, have the same ratio (carbon:hydrogen:oxygen= 1:2:1) (and thus the same empirical formula) but different total numbers of atoms in the molecule.

The molecular mass can be calculated from the chemical formula and is expressed in conventional atomic mass units equal to 1/12 of the mass of a neutral carbon-12 (12C isotope) atom. For network solids, the term formula unit is used in stoichiometric calculations.

For molecules with a complicated 3-dimensional structure, especially involving atoms bonded to four different substituents, a simple molecular formula or even semi-structural chemical formula may not be enough to completely specify the molecule. In this case, a graphical type of formula called a structural formula may be needed. Structural formulas may in turn be represented with a one-dimensional chemical name, but such chemical nomenclature requires many words and terms which are not part of chemical formulas.

Structure and STM image of a "cyanostar" dendrimer molecule.[23]

Molecules have fixed equilibrium geometries—bond lengths and angles— about which they continuously oscillate through vibrational and rotational motions. A pure substance is composed of molecules with the same average geometrical structure. The chemical formula and the structure of a molecule are the two important factors that determine its properties, particularly its reactivity. Isomers share a chemical formula but normally have very different properties because of their different structures. Stereoisomers, a particular type of isomer, may have very similar physico-chemical properties and at the same time different biochemical activities.

Hydrogen can be removed from individual H2TPP molecules by applying excess voltage to the tip of a scanning tunneling microscope (STM, a); this removal alters the current-voltage (I-V) curves of TPP molecules, measured using the same STM tip, from diode like (red curve in b) to resistor like (green curve). Image (c) shows a row of TPP, H2TPP and TPP molecules. While scanning image (d), excess voltage was applied to H2TPP at the black dot, which instantly removed hydrogen, as shown in the bottom part of (d) and in the rescan image (e). Such manipulations can be used in single-molecule electronics.[24]

Molecular spectroscopy deals with the response (spectrum) of molecules interacting with probing signals of known energy (or frequency, according to Planck's formula). Molecules have quantized energy levels that can be analyzed by detecting the molecule's energy exchange through absorbance or emission.[25] Spectroscopy does not generally refer to diffraction studies where particles such as neutrons, electrons, or high energy X-rays interact with a regular arrangement of molecules (as in a crystal).

Microwave spectroscopy commonly measures changes in the rotation of molecules, and can be used to identify molecules in outer space. Infrared spectroscopy measures the vibration of molecules, including stretching, bending or twisting motions. It is commonly used to identify the kinds of bonds or functional groups in molecules. Changes in the arrangements of electrons yield absorption or emission lines in ultraviolet, visible or near infrared light, and result in colour. Nuclear resonance spectroscopy measures the environment of particular nuclei in the molecule, and can be used to characterise the numbers of atoms in different positions in a molecule.

The study of molecules by molecular physics and theoretical chemistry is largely based on quantum mechanics and is essential for the understanding of the chemical bond. The simplest of molecules is the hydrogen molecule-ion, H2+, and the simplest of all the chemical bonds is the one-electron bond. H2+ is composed of two positively charged protons and one negatively charged electron, which means that the Schrödinger equation for the system can be solved more easily due to the lack of electron–electron repulsion. With the development of fast digital computers, approximate solutions for more complicated molecules became possible and are one of the main aspects of computational chemistry.

When trying to define rigorously whether an arrangement of atoms is sufficiently stable to be considered a molecule, IUPAC suggests that it "must correspond to a depression on the potential energy surface that is deep enough to confine at least one vibrational state".[4] This definition does not depend on the nature of the interaction between the atoms, but only on the strength of the interaction. In fact, it includes weakly bound species that would not traditionally be considered molecules, such as the helium dimer, He2, which has one vibrational bound state[26] and is so loosely bound that it is only likely to be observed at very low temperatures.

Whether or not an arrangement of atoms is sufficiently stable to be considered a molecule is inherently an operational definition. Philosophically, therefore, a molecule is not a fundamental entity (in contrast, for instance, to an elementary particle); rather, the concept of a molecule is the chemist's way of making a useful statement about the strengths of atomic-scale interactions in the world that we observe.